The Canadian dollar is the top performer this month ahead of today’s Bank of Canada meeting. And although no hike is expected today, CAD could either extend gains or find itself victim to profit-taking depending on the bank’s policy statement or monetary policy report (MPR). 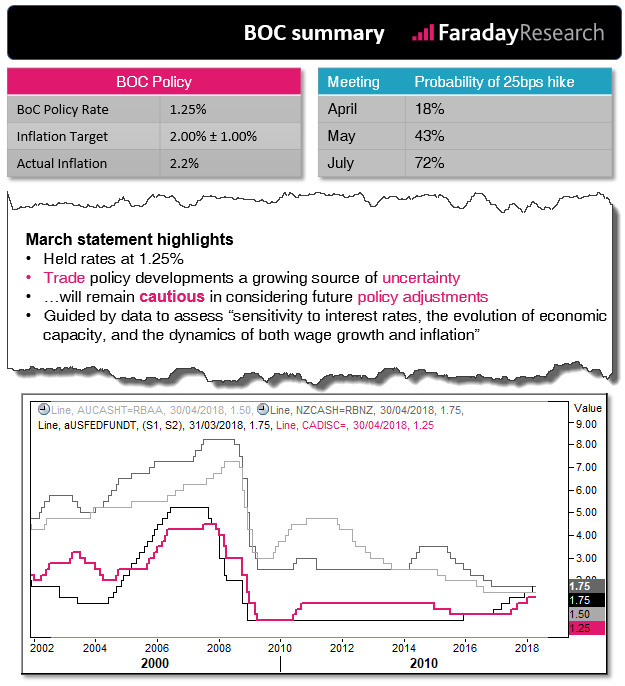 Technically, we want to pursue CAD long positions, but fundamentally, we’re a little wary that BoC may provide a slightly dovish meeting. We can see from the ‘statement highlights’ the bank aims to “remain cautious” with policy and, even though inflation is running slightly hot at 2.2%, fluctuations for inflation are being driven by temporary factors (namely gasoline, electricity and minimum wages).

An economic poll suggests the BoC will hike twice more this year and markets are currently pricing in July to be the first hike. But if we are to hear firmer clues within the MPR or statement that a hike could be approaching, it may help strengthen CAD after the meeting. And could be especially targeted as a 25bps hike would put BoC’s rate on par with RBA’s at 1.75%.

Still, we’re not here to predict, so we’ll wait for key levels to break before committing to a trade. And with CAD being the strongest performer month to date, we’d look to capitalize on that strength if today’s meeting or Friday’s CPI read extends its run.

We’ve may have already seen the swing high with Friday’s bearish hammer. Monday’s bearish inside day and subsequent break lower strongly back this up, although yesterday’s hesitancy to close beneath last week’s low warrants a little caution. Therefore, we’d prefer to see a break beneath 0.9738 before assuming the bears are back in control. 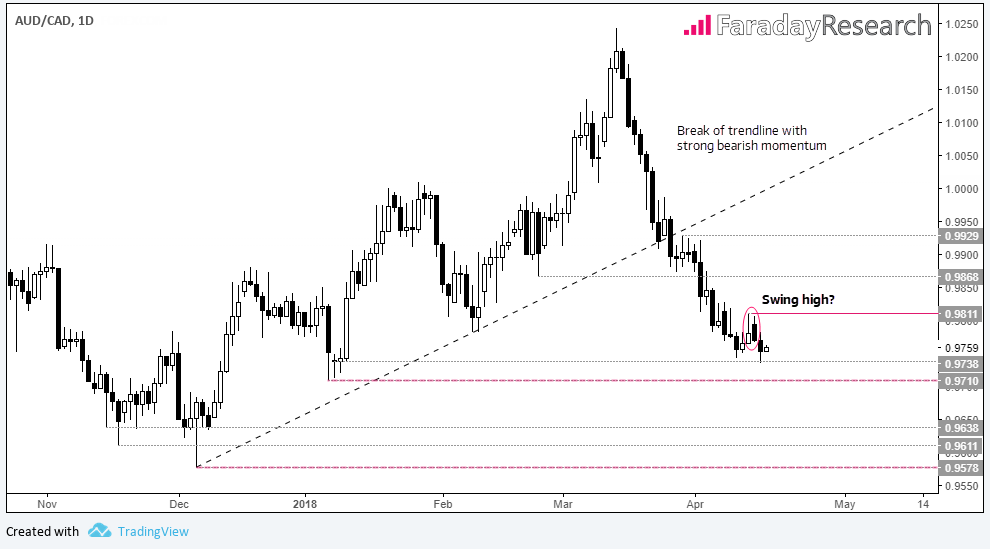 Currently compressing near the highs, bullish momentum has remained a dominant theme since the 80.54 low, yet not expanded so fast it appears at risk of being over-extended. The bearish pinbar and its reluctance to trade above the 85.46 low calls for some caution, so we’d step aside until a break of 85.75 occurs as this clears both of its near-term hurdles. Of course, if we see resistance hold and bearish momentum take hold, it’s back onto the backburner for now. 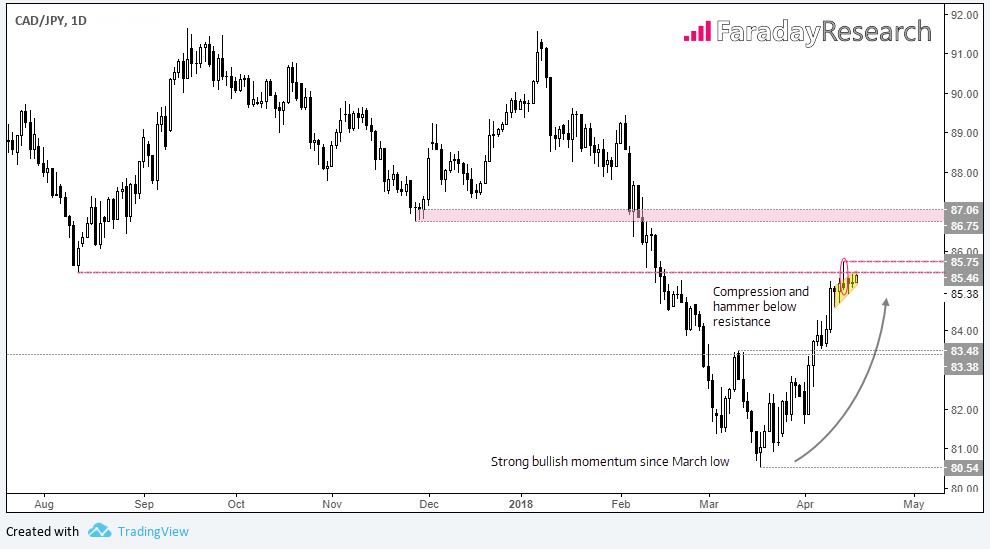 For a broader analysis you can view our USD/CAD post from Monday. We can see that resistance held and allowed bearish momentum to return but, yesterday’s bullish hammer closed above 1.2543 to warn of a potential ‘fakeout’. So, we’d want to see a break of 1.2526 to assume a resumption of the downtrend and eventual run towards the 1.2450 low. 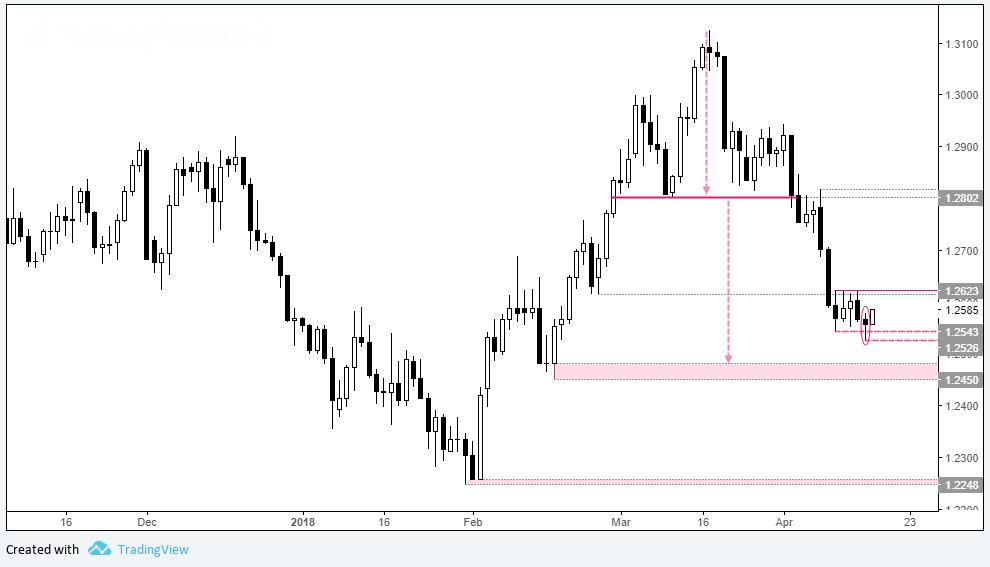 Due to its impressive run from the March low, it would be rude not to mention this cross. The daily trend structure is firmly bullish with minor pullbacks, and recent compression candles respected support prior to yesterday’s range expansion session. Yet as RSI is overbought and yesterday’s high is far beyond the upper Keltner band, we’d prefer to wait for another retracement or period of tight consolidation before entering. Who knows, if today’s meeting is a lame duck and the swiss franc can cease its broad descent, perhaps we’ll be treated to such an outcome. 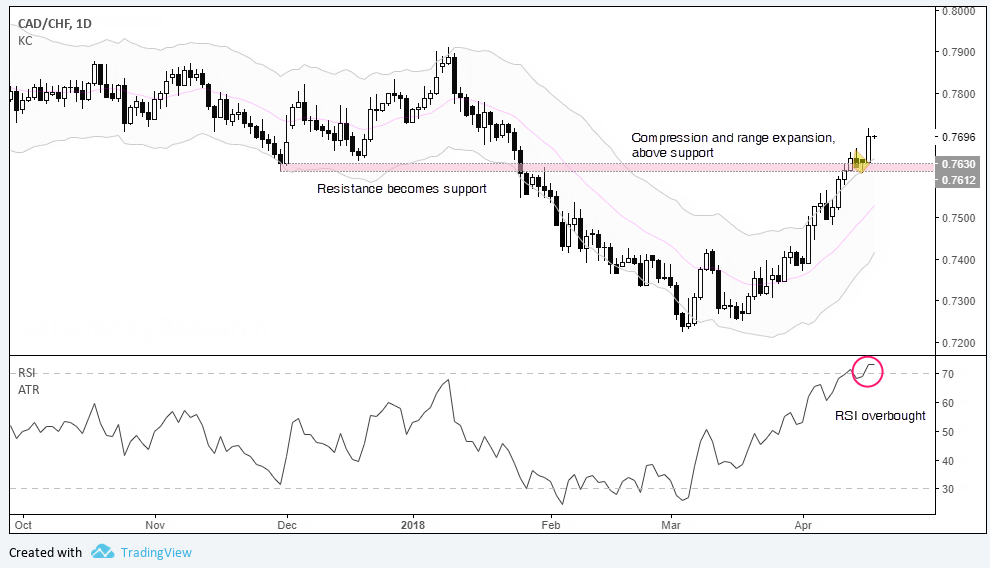