HomenewsAnalysisCAD Weakness Ahead on Dovish BoC and Trade War Escalation

CAD Weakness Ahead on Dovish BoC and Trade War Escalation

See our quarterly FX forecast to learn what will drive prices throughout Q3! 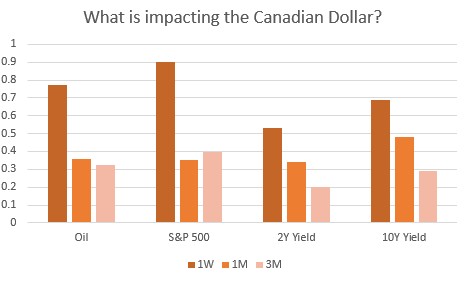 Risk sentiment stemming from growing concerns of a global slowdown has had an increasing impact on the direction of the Canadian Dollar in recent sessions.

Bank of Canada:The Next Central Bank to Follow the Dovish Bandwagon

Since the July Monetary Policy Report, Canadian data has eased with the Citi Canadian Surprise Index pulling back from a 9yr high to lowest level this year. Among the notable data points that softened had been the most recent employment report, which showed a contraction in Canadian jobs created, while the unemployment rate rose 0.2ppts to 5.7%. Alongside this, the housing market has shown new house prices continuing to drop, yet again raising concerns for the BoC. 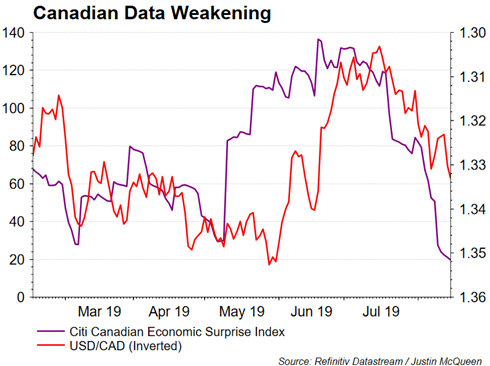 The Bank of Canada has previously cited that escalation of trade conflicts remains the biggest downside risk to the global and Canadian outlooks. Since this statement, the ceasefire has been broken between the US and China after President Trump pledged to place 10% tariffs on $300bln worth of Chinese goods (albeit some tariffs will be delayed). In turn, this has underpinned the dramatic move to safety with global bonds continuing to rally as market participants grow concerned over a global slowdown. In response to the escalating trade tensions, global central banks have eased monetary policy in order to shield their respective economies from negative spillovers. This is also a potential avenue for the Bank of Canada, who could look to provide an insurance rate cut. As it stands, market pricing for BoC easing is relatively tame with one rate cut priced by the year end, therefore a signal from the central bank that easing is warranted could bring forward expectations of near term easing and thus weigh on the Canadian Dollar.

Elsewhere, the impact of escalating trade war tensions has been felt in the energy complex with oil prices dropping on concerns of slowing demand. As such, with the oil prices notably below the BoC’s recent assumption, risks are that the central bank could downgrade its outlook.

Forget the US Yield Curve Inversion, Look at Canada

While the US yield curve inversion has increased investor angst over the potential risk of a recession. CAD traders really be looking at the Canadian yield curve, which is now 90% inverted, while the 10yr yield is over 60bps below the BoC’s target rate. Alongside this, the Canadian 2s10s curve is also the most inverted since the early 2000, providing warning signals to BoC officials. 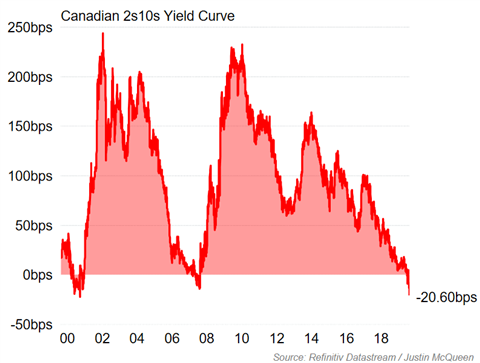 Given that global central banks have eased monetary policy we feel there is an increasing likelihood that the Bank of Canada will follow suit, thus raising downside risks to the Canadian Dollar with expectations of BoC easing relatively tame thus far. That said, we have a bullish bias on USD/CAD with upside risks towards 1.35.