Canada: Expect A Rate Rise, But The BoC’s Treading Carefully

After a six month hiatus, the Bank of Canada looks set to hike again this week, but future policy moves will largely be determined by the prospect for a deal on U.S.-Canada trade

After experiencing a surprise burst of growth in 2017, economic activity has lost a little momentum in 2018. Part of this can be attributed to rising trade tensions that have seen businesses becoming more wary about putting money to work in the economy. Both capital investment and hiring have slowed and we’ve also seen consumer spending growth moderate. However, this has to be put in context. Last year the economy grew by more than 3% and even with the slowdown we’re currently seeing, the economy is set to grow by more than 2% in 2018.

At the same time inflation is broadly in line with the Bank of Canada’s 2% target and this supports the notion that the economy is performing close to capacity. Wage growth has also accelerated so there is a sense that the BoC runs the risk of falling behind the curve. As a result, we see financial markets pricing in nearly a 90% chance of a 25bp hike on Wednesday, while 16 out of 21 economists surveyed by Bloomberg look for such a move. We agree and also anticipate a 25bp move. 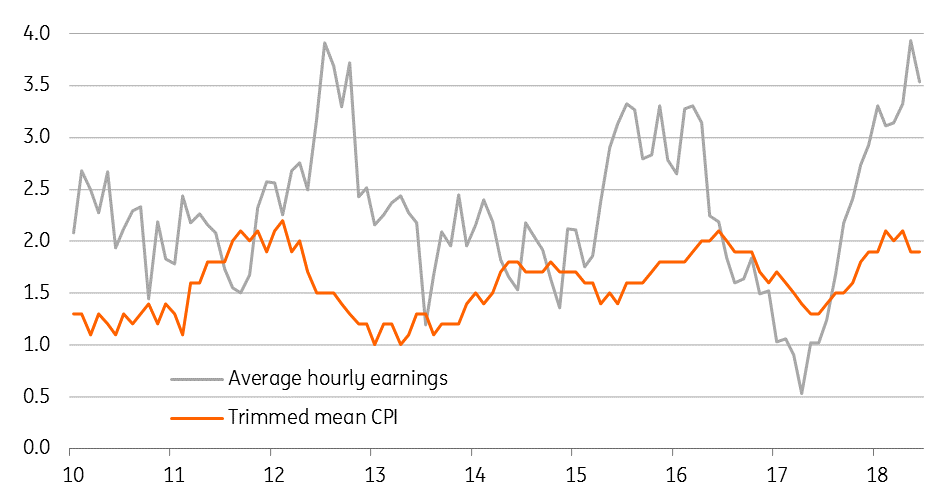 Trade tensions are a concern

Further policy moves are likely to be contingent on whether the current storm surrounding U.S. President Donald Trump’s trade rhetoric calms down. The imposition of tariffs has seemingly had only a modest direct impact on the economy so far, with it being more of a drag on sentiment. However, remember that the $545 billion of cross-border trade Canada conducts with the U.S. means any escalation of protectionist policies could have very important ramifications. Indeed, Canadian exports to the U.S. are equivalent to 17% of Canadian .

Trump has suggested pushing NAFTA negotiations further down the line until after the U.S. mid-term elections in November, which will prolong Canada’s trade uncertainties. However, the U.S. economy is roaring ahead, and while the trade situation remains largely unchanged, this poses major opportunities for Canadian exporters. As such we are still anticipating another rate rise before the end of the year from the Bank of Canada. That said, should more tariffs suddenly be applied the probability of such a move will wane.

This publication has been prepared by ING solely for information purposes without regard to any particular user’s investment objectives, financial situation, or means. For our full disclaimer please click here.