Tuesday, Aug. 28: Five things the markets are talking about

Any trade deal is good for capital markets; even yesterday’s U.S.-Mexico “non-ratified” trade announcement has been able to push U.S. stocks to new records, G10 currencies and commodities to multi-week highs.

However, even the most bullish of investors should take heed about overreacting to what also might be the latest in an extended back-and-forth between the U.S. and its trade partners.

U.S. President Donald Trump’s remarks on the U.S.-Mexico breakthrough indicate that Canada may be presented with a “take-it-or-leave-it offer.” Which suggests that the U.S. will take a tough stance in negotiations. Canada’s trade negotiators are expected to start talks later today.

For the ‘big’ dollar, long dollar positions are beginning to ask questions. A number of recent factors are beginning to weigh on its performance. U.S. Fed chair Jerome Powell’s ‘dovish’ comments at Jackson Hole, he saw no reason to speed up interest rate increases, coupled with the lack of stronger U.S. data momentum and flattening yield curve are somewhat negative for the ‘buck.’

In Japan, the breached the psychological 23,000 level overnight on positive North American trade steps, but managed to shed most of the gains on profit-taking but still ended the day at its highest close in three months. The Nikkei share average finished the day up 0.1%, while the broader closed 0.2% higher.

In China, stocks ended slightly lower as investors took a breather after yesterday’s very strong session, supported by the People’s Bank of China (PBoC) supporting the yuan. The blue-chip index fell 0.2%, while the slipped 0.1% as the Sino-U.S. trade dispute wears on. 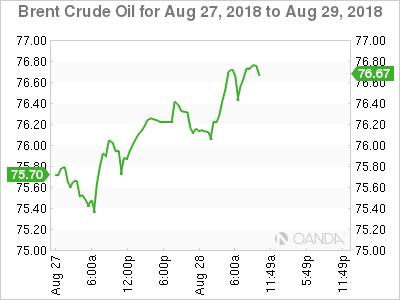 Oil prices are a tad under pressure, weighed down by gradually rising output from OPEC but supported by supply risks from places such as Venezuela, Africa and Iran.

The market is expecting U.S. inventories to rise this week as some refineries go into maintenance.

So, expect investors to take their cue from today’s weekly inventory data published by the private API this afternoon.

Ahead of the U.S. open, gold prices are holding steady after hitting a two-week high yesterday, with the dollar under pressure in the wake of a trade deal between the U.S. and Mexico. is trading at $1,211.31 an ounce. Prices hit their highest since Aug. 13 at $1,212.38 on Monday, while the metal rose about 1.7% on Friday in its biggest one-day percentage gain in 15 months. 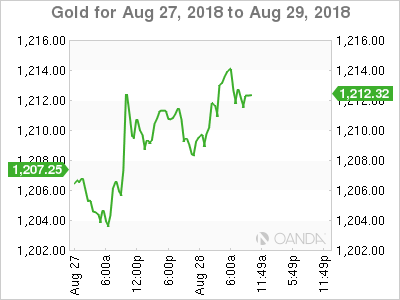 For now, risk-on mood continues to prevail in the sovereign government bond markets. Currently, the 10-year Bund yield is trading broadly unchanged at 0.37%.

However, Eurozone government bond supply is expected to pick up as the summer ends. Italy will offer +€1.25B to €1.75B in March 2020-dated zero coupon notes at auction, while Finland yesterday hired banks for its own 10-year bond syndication aiming to raise €3B, with the transaction expected to go ahead later today.

The one exception is Italian yields. The 10-year BTP yield is trading around 2018-high, up 3 bps, at 3.20% with news out of Italy remaining intense. Investors are concerned that Italy will overshoot its budget deficit target, along with the possibility of clash between the Italian government and the European Commission on budget and migration issues. 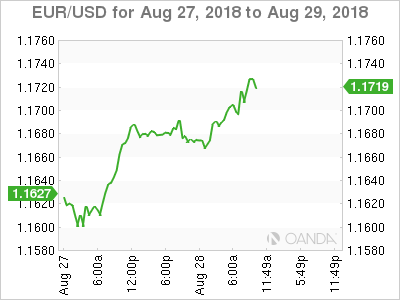 (€1.1693) is probing its four-week high as the pair edges back towards the €1.17 level. EUR is firmer despite the higher Italian yields.

The SEK (€10.6473) is a tad softer after Swedish July retail sales data came in below expectations. This has convinced the rates market to push back its forecast for the first potential rate hike by the Riksbank until April 2019.

TRY ($6.2120 up 1%) maintains its soft tone for a second consecutive session as local markets returned from their week-long holiday.

Yesterday, the MXN rallied 0.8% and the CAD gained 0.5% outright. Fresh optimism over global trade also boosted the currencies of other exported-dependent countries, including the KWN South Korea and Chile.

Finally, China boosted the yuan to new records. Overnight, China guided the yuan 0.7% stronger outright, boosting the Chinese currency by the most since June 1, 2017. The PBoC fixed the dollar’s midpoint for daily trading at ¥6.8052, compared with ¥6.8508 on Monday. 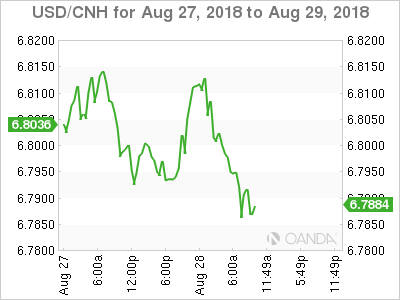 Data this morning showed Eurozone bank lending grew at a steady rate last month, a trend that should support corporate investments in the region.

The ECB said that lending to non-financial corporations grew at an annual rate of 4.1%, the same rate as in June and the fastest pace since May 2009.

Lending to eurozone households remained robust too, growing at an annual rate of 3.0% in July.

Note: But despite a noticeable recovery in bank lending from the 2014, lending rates have remained well below pre-crisis levels. 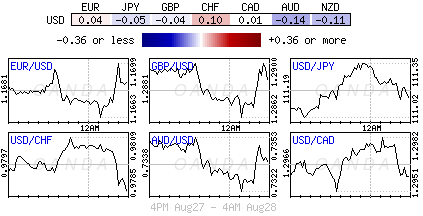