Employment change in September from the Labour Force Survey (LFS) was higher than consensus (63K vs. 25K m/m) and our own estimate (35K). Moreover, despite an uptick in the participation rate from 65.3% to 65.4%, the unemployment rate decreased to 5.9% (from 6.0%). One disappointing element in the September LFS is that wage gains are weak, reaching 2.2% y/y and continue to be below inflation (2.8% in August).

While the headline jobs number is positive, a few things caught our attention.

Another point worth highlighting is the gap in 2018 between the household survey (the LFS) and the payrolls data (the Survey of Employment, Payrolls, and Hours, (SEPH)). On an annual basis, over the last eight years, employment gains estimated by both the LFS and the SEPH have been fairly similar. However, so far this year, payrolls data have been showing much stronger employment gains than the LFS (see chart). While the SEPH is published approximately two months after the LFS, it is quite likely that the SEPH numbers will eventually converge towards those of the LFS. With the economy already at full employment, we are of the view that employment is probably trending closer to what the household survey suggests: the potential for further gains is very much limited. 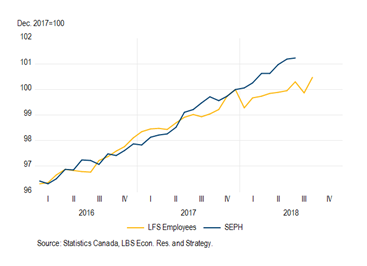