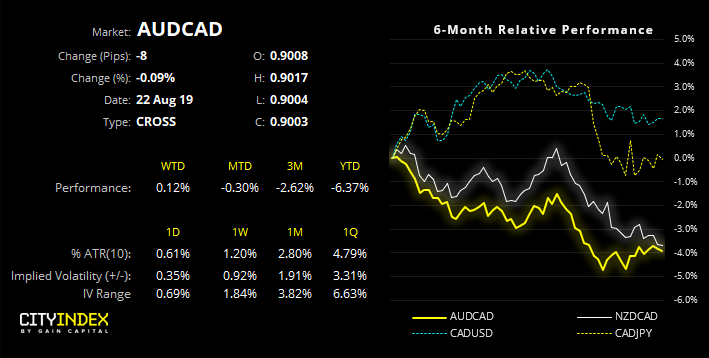 Canada’s inflation surprised to the upside yesterday, providing CAD with a boost and further lowering expectations for a rate cut. At 2% it remains at their centre band of the 1-3% target and, so far, we’ve not seen the ‘inflationary dip’ outlined in July’s MPR and policy statement, so CPI is technically outperforming their expectations for now.

Domestically, I suspect it’s premature to expect a cut from Bank of Canada as its data is holding up well overall. Sure, employment has been below expectations these past two months, yet this is not a core focus in their July statement, which finishes with ‘developments in the energy sector’ and ‘impact of trade conflicts’ being worthy of ‘particular attention.’

Furthermore, wages have rebounded and consumer confidence remains high, although it would be nice to see this translate to improved retail sales tomorrow.

As it stands, markets have reduced their expectations for the BoC to cut this past week, with the 1-month OIS pricing in around a 15% chance of a cut in September and the 3-month around 30%. Assuming U.S. President Donald Trump doesn’t take his sledgehammer to the trade war and turn his ire back to Canada, market pricing for a cut may remain low for a while longer.

Volatility remains low in the lead up to the Jackson Hole symposium, and remains below key resistance outlined by my colleague Joe Perry. While we wait for its next directional move, we’re also keeping close tabs on and .

During its current downtrend, corrections on have been timely and remained below the 50% retracement mark. Prices are currently compressing and we see a series of upper wicks failing to pierce the 90c level and remain below a zone of resistance.

hit our longer-term bearish target, projected from its double top pattern back in April. However, measured moves are generally considered as a minimum target, which allows for the move to continue.