The 0.5% month-over-month real GDP gain in June and the 54,000 net job creation in July clearly show that the Canadian economy has momentum. Our economy is running at full capacity. Combined with the pass-through of Ontario’s steep minimum-wage increase on housekeeping and restaurant prices, higher CPI inflation should not be a surprise. Core CPI inflation measures averaged 2.0% between February and June 2018, after running below 2% in 2017. Total CPI inflation rose from 2.2% to 2.5% during this recent period, the longest stretch, since 2014, for which inflation was above the 2% Bank of Canada (BoC) target.

This on-going build-up in CPI inflation is likely not over yet. We forecast a 0.2% month-over-month increase in total CPI for the month of July (consensus at +0.1% m/m) based on higher energy prices and shelter costs. The report will be released on Friday morning. Our estimate also includes the modest impact of the retaliatory counter-measures adopted by the federal government against the U.S. steel and aluminum tariffs on a few CPI sub-components, including housing operations and furnishing, food and recreation. If our call turns out to be right, total CPI inflation will have accelerated further to reach a 7-year high of 2.7% in July (see chart).

An elevated 2.7% CPI inflation figure should normally benefit investors who are exposed to Canadian real return bonds. A 2.7% inflation rate would also be close to the upper bound of the 1 to 3% range, and confirm the growing market view that another BoC rate hike is coming this fall. This being said, we do not see the need for the BoC to hike prematurely at its Sept. 5th meeting. Since the BoC just raised its policy rate to 1.50% at its mid-July meeting, another 25 basis points so soon would not really be in line with the “gradual approach” promoted by the BoC regarding its strategy for withdrawing monetary stimulus. Furthermore, 25% auto tariffs from the U.S. remain a threat that warrants patience. Thus, the overnight rate target is more likely to increase at the Oct. 24th or Dec. 5th meeting. 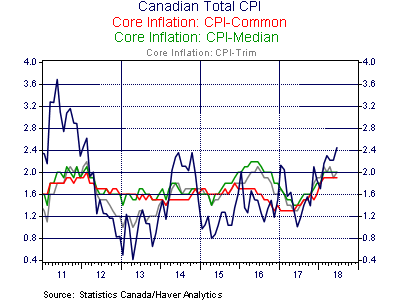