The Canadian dollar lost 0.25 percent on Thursday. The was under pressure as oil was down and it forced the currency to miss the other majors gaining on the U.S. dollar. The greenback is on the back foot as soft economic data is increasing the probabilities of a rate cut by the Federal Reserve this year. That would mark a full 180-degree turn from last year where the benchmark Fed funds rate was raised four times.

The Canadian dollar appreciated just after the release of wholesale sales where a 1.4-percent gain was posted. The better than expected wholesale data combined with retail sales published yesterday to mark a strong rebound. Economic fundamentals are mixed in Canada, but in any other time this would have been great news for the currency. 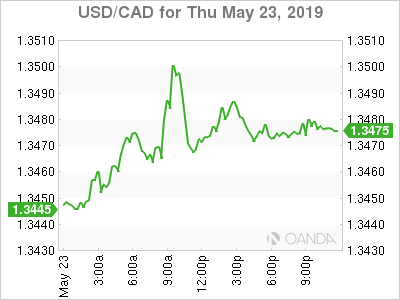 Trade war drums continue to sound and even as U.S. President Donald Trump said that there is a good possibility of a trade deal with China, the fact that the Asian nation is stepping up its combative rhetoric is not convincing investors.

The Canadian dollar will go into Friday’s session with little on the economic calendar with the biggest market movers being British headlines on the fate of Prime Minister Theresa May and developments on the U.S.-China negotiations and the European Parliamentary Elections.

The U.S. dollar is lower as disappointing PMIs released on Thursday could convince the Fed to fully reverse the monetary policy course and issue an interest rate cut to stimulate the economy. The Fed lifted rates four times in 2018 and applied the brakes hard on January of this year as investor confidence tumbled. Economic indicators have been mixed, but as the U.S.-China trade war does not appear near a peaceful agreement, the currency and the Fed are more sensitive to negative data. 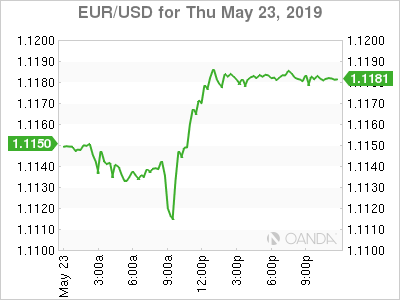 Global stocks were deep in the red on Thursday. The continuing saga of the trade battle between the U.S. and China is taking a toll on investor confidence. The IMF published today what many feared, but the Trump administration was not willing to admit, US importers are paying the tariffs. 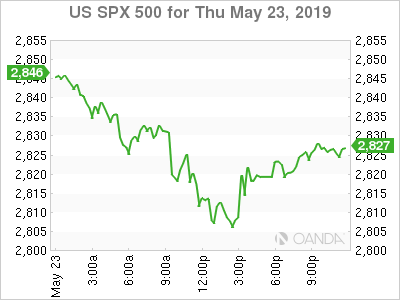 The tech sector was knocked back as supply chains depend on Chinese manufacturing. Energy shares were also hit as oil demand was hit by what looks to be a prolonged trade spat.

Lower than expected PMIs in Japan, Europe and the U.S. put back in the spotlight the concerns about global growth. The Fed has rejoined dovish central banks, with no rate hikes this year, but now there are more conversations around a potential interest rate cut.

China is digging its heels as the U.S. increases tariffs, so unless the awaited G20 meeting does not bear any meaningful fruit, equities will remain under pressure.

Oil prices tumbled more than 4 percent on Thursday adding to the weekly drop in energy prices. Oil prices fell by more than 2 percent on Wednesday after the release of the weekly inventory data. A surprise buildup of 4.7 million barrels of crude and 3.7 million barrels of gasoline pushed prices down. West Texas Intermediate is on track to lose 7.64 percent and 6.01 percent this week. 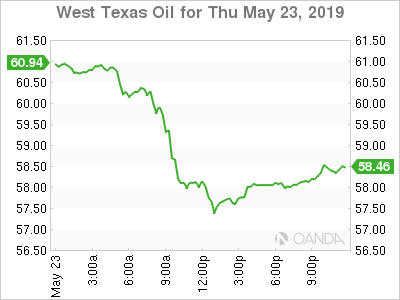 Middle East tensions and the ongoing OPEC+ crude output cut deal have kept prices in a higher range, but higher U.S. production keeps putting downward pressure on prices. The balance between the OPEC+ cutting supply and the U.S. ramping up production was broken in favor of lower prices as the trade war is tipping the scale by reducing future demand.

Geopolitical, weather and operational factors have reduced crude supply levels. The OPEC+ agreement has been the major factor and with the upcoming June end of the deal there is uncertainty if an extension is coming. 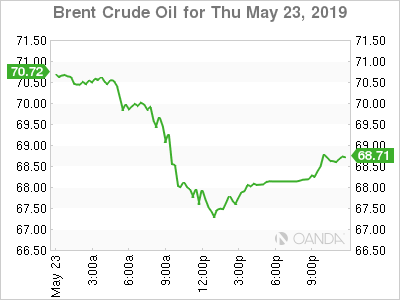 The U.S. is impacting prices in three ways. Sanctions against Iran and Venezuela for political reasons have boosted prices as it reduced supply. U.S.-China trade disputes have a negative effect on global growth forecast reducing energy demand going forward. The final factor has been the rise of American output. While sanctions reduce supply and boost prices, lower energy demand and rising production depreciates crude as there is a higher risk of oversupply.

Gold rose 0.71 percent on Thursday. Tariffs from both sides have escalated and China is not backing down to U.S. pressure which could prolong the dispute with no date set for negotiations to reassume. U.S. Secretary Steve Mnuchin has said that there are no plans for him to visit Beijing, although he is looking forward to renewing talks.

Brexit concerns rose as May managed to unite all UK political factions against her. Putting a second referendum on the table did not sit well with Brexiteers but make it a condition on passing her Brexit proposal was a non-starter for Remain supporters. May’s decision to stick to her proposal could end up being the last straw that leads to her eventual downfall. The task on hand was near impossible from the start. A close Leave victory in the referendum left the historic decision with massive opposition as the perfect deal was never going to be achieved. 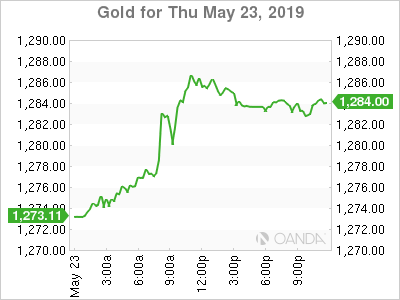 May’s almost inevitable exit would open the door for a Leave candidate to step forward. Boris Johnson is the most obvious choice, which once again would put a no-deal exit on the table. The political uncertainty in England is making investors seek the safety of gold.

Gold started gaining traction on Wednesday afternoon as the Fed published the minutes from its April/May FOMC meeting. The central stressed patience and affirmed current monetary policy would remain in place for some time. The Fed has already removed all rate hikes from its 2019 calendar as per member forecasts. Rate cut probabilities keep rising, but until there is a clear deterioration of economic fundamentals the Fed will remain on the sidelines.