The Canadian dollar rose 0.1 percent against the U.S. dollar on Tuesday. The Canada Day holiday had put the in a vulnerable spot as the G20 wrapped up with U.S. President Donald Trump and Chinese President Xi Jinping agreeing to restart negotiations on trade. The outcome was not the best-case scenario for the market as there were no details revealed on when the new rounds will take place, or how far apart both parties are.

Canadian manufacturing is not expanding, with the common thread of contraction that the economies of China and Europe have reported this week. Trade headwinds are to blame for the lack of traction and the prolonged dispute between the U.S. and China has put downward pressure on global growth. 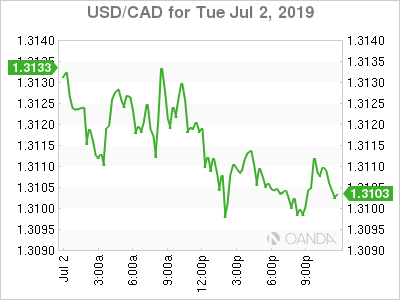 Up ahead for the Canadian currency is the release of the trade balance on Wednesday and employment and PMI data on Friday. Last month, while the U.S. non-farm payrolls (NFP) disappointed with less than 100,000 jobs in the U.S., the Canadian employment report surprised with a five-time gain even after the monster 106,000 job gain in April. This time around the forecast in the U.S. calls for a rebound after the data miss and Canadian numbers should fall back to reality with 10,000 added positions in June.

The U.S. dollar is on the back foot as the trade win from the G20 is looking more like a tie. Global growth concerns after global manufacturing indicators disappointed and the U.S. opening another trade front after threatening the EU with more tariffs to offset government aid to the aviation industry. 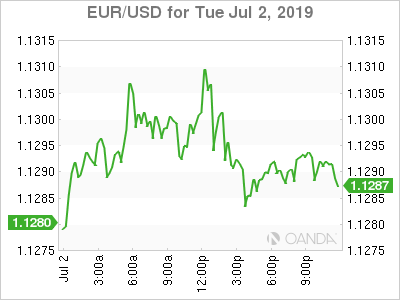 Central banks continue to signal lower rates for longer. The Reserve Bank of Australia (RBA) was the latest to cut its benchmark interest rate but is satisfied with the new level and its optimistic about the economic outlook.

Christine Lagarde of the IMF was nominated to replace Mario Draghi when he steps down at the European Central Bank (ECB) at the end of October.

Oil prices fell hard on Tuesday despite the OPEC+ announcing a nine-month extension for their production cut agreement. Manufacturing data in China and Europe came in below expectations and is putting a huge question mark on energy demand going forward.

The G20 meeting lacked the trade catalyst needed for energy prices to really take off. The meeting between Saudi Arabia and Russia was the most productive sideline event as the OPEC+ extension was announced back then, but without a real breakthrough on the tariff war between the U.S. and China it was not enough. 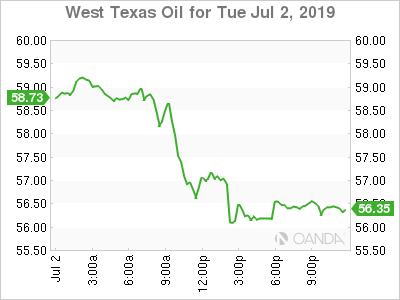 The prolonged trade war is now on ice after both sides agreed to a truce, but the market has seen this before and based on the aggressive demands from the U.S., it could unravel once again.

Gold rose on Tuesday as the metal once again traded above $1,400 as the G20 trade optimism started to dissipate. Weak global manufacturing and comments from U.S. officials on the length and difficulty of the U.S.-China deal put gold back in play as a safe haven.

The Trump-Xi sit-down had a weaker outcome than expected with negotiations back at Square (NYSE:) 1, and the U.S. taking an aggressive stance while China has signalled it won’t back down, the recipe for long and difficult negotiations. The news that the White House is ready to reopen a trade front as it threatened new tariffs on EU exports was a positive for gold. 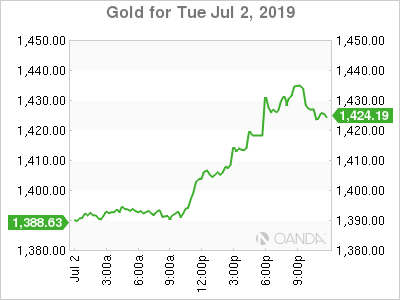 Central banks will not be an obstacle for the yellow metal. The Reserve Bank of Australia (RBA) cut rates on Tuesday to 1 percent and the Fed is expected to cut the benchmark rate at least once this year. Easing monetary policy is back in vogue as global growth has failed to gather momentum.

U.S. stocks rose to a new record high, despite concerns about global growth. Safe havens gained ahead of the Fourth of July holiday as trade optimism is beginning to fade as the truce with China is not even a week old and the US is looking for its next trade battle. The dovish turn by the Fed is keeping the dollar under pressure and driving investors to look for more risk as the benchmark interest rate will be lower. 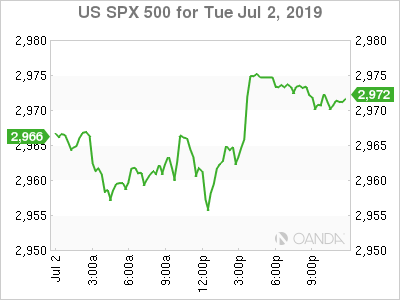 U.S. manufacturing was a pleasant surprise and continues to show the difference in economic growth between the U.S. and other major economies. The U.S. market will close early for the Independence Day celebrations, but traders will be back at the desk for Friday’s U.S. non-farm payrolls (NFP). A rebound of last month’s disappointing report is expected with a gain of 170,000 jobs in June.