The Bank of Canada raised on Wednesday, as expected, and said further gradual rate hikes will be warranted, but warned mounting trade tensions will have a larger impact on investment and exports than previously thought.

The central bank said the effect of tit-for-tat tariffs imposed by Canada and the United States will cause some difficult adjustments for industries and workers, but the impact of the tariffs on growth and inflation is expected to be modest. 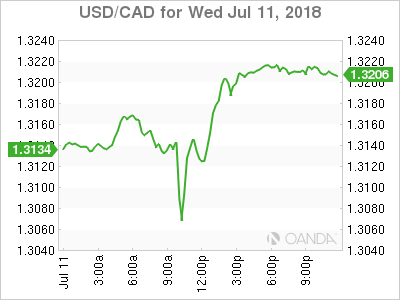 The bank tweaked its standard language on future rate hikes, saying that while it will take a gradual approach guided by data, it is monitoring the economy’s adjustment to higher rates, the evolution of capacity and wage pressures as well as “the response of companies and consumers to trade actions.”

Pointing to a stronger-than-expected U.S. economy, the bank boosted its estimate of Canadian second-quarter growth to 2.8 percent from 2.5 percent forecast in April, but said growth will slow to 1.5 percent in the third quarter.

The bank said inflation is expected to pick up to about 2.5 percent before settling back to 2 percent by the second half of 2019, while wage growth is running at about 2.3 percent, “slower than would be expected in a labor market with no slack.”