USD/CAD has enjoyed a 0.75% climb in August as the US Dollar extended its rally versus the Canadian Dollar after bottoming out in mid-July. While the fundamental drivers between the two North American currencies are in constant flux, USD/CAD will have to negotiate the 200-day moving average while RSI creeps closer to overbought territory. The combination of topside barriers and potential for fundamental catalysts – resulting in heightened volatility across all CAD pairs – in the week ahead could spark a reemergence of Canadian Dollar strength that could look to threaten the USD/CAD rebound. 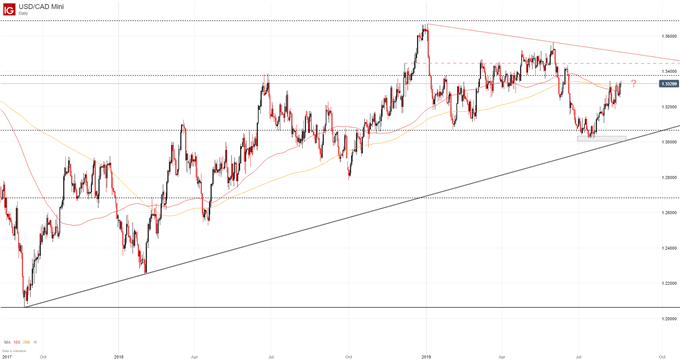 To that end, the pair presents an intriguing opportunity to explore short exposure if USD/CAD is unable to comfortably surpass the recent peaks around 1.3344. A failure to do so could speak to tiredness among bulls and bolster a bearish bias in the shorter-term. Should such price action occur, 1.3250 will be an initial area of interest as the first mentionable zone of support. 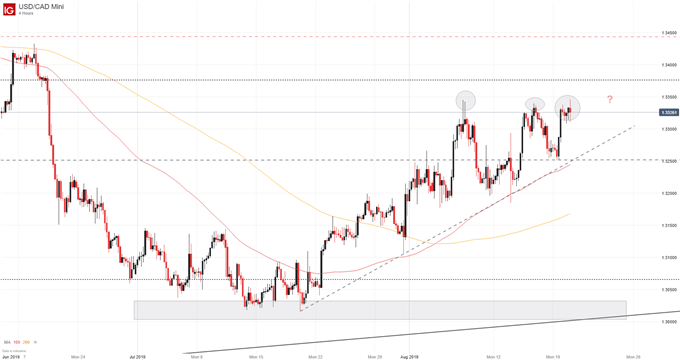 Subsequent points of interest are scattered beneath near 1.3200 and 1.3145 before more formidable support will look to come into play slightly above 1.3015. Conversely, 1.3440 will be looked to as an area of invalidation if bullishness resumes which is entirely possible given the economic calendar for both the US and Canadian Dollars and the gravity of the Jackson Hole Symposium. 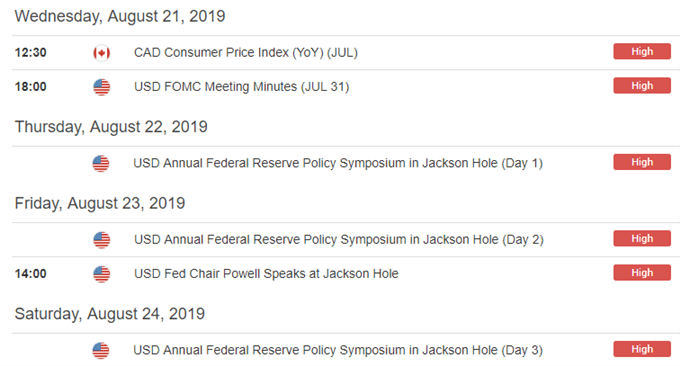 Another consideration to be made is the recent rebound in crude oil prices, which has seemingly provided very little boost for the Canadian Dollar. That said, Canadian CPI will pose the first scheduled risk to USD/CAD bearishness. Should the reading come in notably beneath expectations, CAD strength would likely fade as the odds of future rate cuts from the Bank of Canada tick higher in response to disappointing inflation. In the meantime, follow @PeterHanksFX on Twitter for updates and analysis on the developing price action.