The is trading higher on Friday after the US consumer price index and retail sales disappointed. Inflation was flat and even removing the most volatile components the reading only improved to 0.1 percent. Retail sales dropped by 0.2 percent with the same result after removing food and energy. The U.S. Federal Reserve Chair Janet was seen as dovish on US growth during her back to back testimonies this week. Inflation remains a point of concern for the central bank as it looks to close the year with at least another interest rate hike and the beginning of its balance sheet reduction program.

Next week it will be up to Canada to show its inflation and retail sales data. is expected to remain at 0 percent with growing by 0.4 percent but still below last month’s gains. The IMF and some analysts have questioned the eagerness of the Bank of Canada (BoC) to hike rates this week when there are still signs that economy has not fully recovered, but like in the US the solid employment numbers are covering over the cracks in the Canadian economy for the time being. 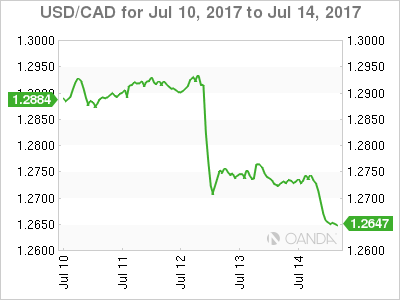 The fell 0.652 percent in the last 24 hours. The currency is trading at 1.2655 after the release of the US retail sales and CPI numbers came in below expectations. Canadian data was missing in action on Friday, but the Bank of Canada (BoC) on Wednesday gave the loonie enough momentum for the currency to keep gaining versus the US dollar.

The USD has lost 1.741 percent versus the CAD in the last five days. Strong economic fundamentals in Canada and concerns with rising household debt prompted the central bank to raise interest rates by 25 basis points to 0.75 percent. The BoC went from easing monetary policy to its first rate hike in 7 years in a relatively short time. The lack of quantitive easing program made it easier for the central bank to make the transition as quickly as it did.

The Bank of Canada joins the U.S. Federal Reserve as the only two central banks in the G7 to hike rates but also in dismissing the lack of inflation as temporary. The BoC is also moving to a more data dependant rhetoric but markets still price in another rate hike before the end of the year.

A big obstacle for the loonie before the end of the year will be the NAFTA renegotiations slated to begin in late August. The Trump administration would rather tear the agreement and forge a new one, but at the moment its willing to go ahead at the request of Canada and Mexico. If the hard ball tactics of tariffs are any indication it will be a tough negotiation. Mexico has already said that it could walk out if tariffs are part of the new agreement. Regarding timing Mexican officials have said that they expect the negotiations to be done by before the end of 2017 and not drag on for a long time. 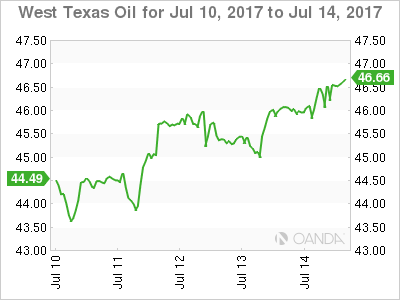 Oil prices rose 1.096 percent on Friday. West Texas Intermediate is trading at $46.50 as energy prices rose after weaker US data and the apparent rise of global demand for energy. This week’s crude stocks fell 7.6 million barrels, with the previous report also showing a 6.3 million barrel drop. A supply disruption in Nigeria also pushed prices higher. Nigeria and Libya are exempt from the Organization of the Petroleum Exporting Countries (OPEC) production cut agreement due to the high risk of outages.

The Organization of the Petroleum Exporting Countries (OPEC) deal with other major producers to limit production has been the biggest factor keeping prices stable. There are concerns that compliance with the deal that was near 100 percent this year, has fallen to 78 percent as some producers like Saudi Arabia have seasonal rises this time of year. Oil producers that are part of the agreement will meet in Russia on July 24 to discuss the current market situation and review the compliance levels.