The Canadian dollar gave back the gains yesterday ahead of the Fed Chair Jerome Powell’s testimony before the U.S. congress. The Bank of Canada (BoC) held the benchmark rate unchanged as expected at 1.75 percent but was more dovish in its statement. The main source for the BoC’s pessimism is trade disputes that impact commodity prices weakening demand.

The Canadian central bank was caught by surprise by the strong pace of the economy in the second quarter, but it concedes it could be temporary factors. The dovish remarks by Powell were met by a dovish BoC statement resulting in the giving back the earlier gains where the currency traded under 1.31, reaching 1.3080 levels only to trade back up to 1.3131 despite the ongoing testimony by Powell. 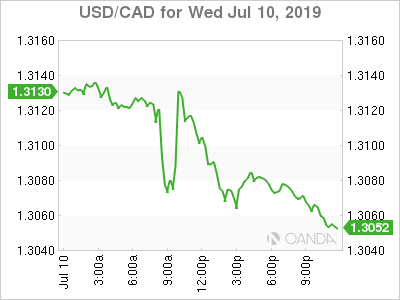 The BoC press conference remarks before the Q&A session made clear that the Canadian central bank is part of the dovish group of central banks that are looking to their tools for easing monetary policy. Deputy Governor Carolyn Wilkins said that the U.S. and Canadian economies are converging, not diverging, but even the bank’s forecast could see more optimism on Canadian growth.

Trade is the biggest headwind, in particular the U.S.-China dispute, Governor Stephen Poloz outlined that the effect of the trade war is tangible. Canada is no stranger to a head-on dispute with the U.S. and even signing the USMCA will provide small comfort.

The Canadian dollar traded at 1.3116 after the press conference. The Bank of Canada (BoC) made clear that is in no rush to intervene as it remains hawkish on the Canadian economy, but cautious about the effects that a prolonged trade war could bring.

Energy prices surged on Wednesday after the release of U.S. weekly crude inventories showed a larger than expected drawdown and a softer dollar as Powell testified before congress. The Energy Information Administration (EIA) published a 9.5 million barrel drop on weekly crude stocks which combined with Middle East tensions and the upcoming storm in the Gulf of Mexico supply will be limited boosting crude prices.

The U.S. dollar was on the back foot after Powell kept up the dovish rhetoric that has the market pricing in an interest rate cut in July. 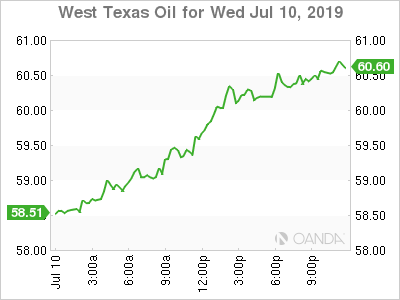 The U.S.-Iran tension has not eased as both sides are digging in their heels and there are very little diplomacy options available. The Strait of Hormuz a big point of contention as Iran has said it could limit traffic or install a toll system to offset the negative effect of U.S. sanctions. 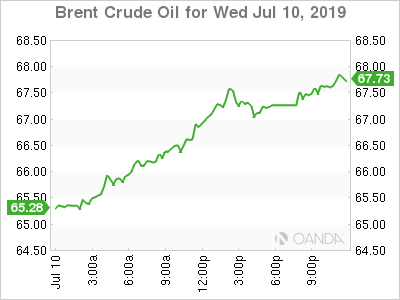 GOLD – Gold Higher on Dollar Under Pressure from Dovish Fed

Gold jumped 1.46 percent on Wednesday after the Fed Chair continued to signal an upcoming rate cut. In his prepared remarks and later in the question and answer period Powell went full dove with his comments. The U.S.-China trade war continues to be a threat for global growth and the U.S. central bank is being forced to slash the benchmark interest rate to keep the economy from regressing. 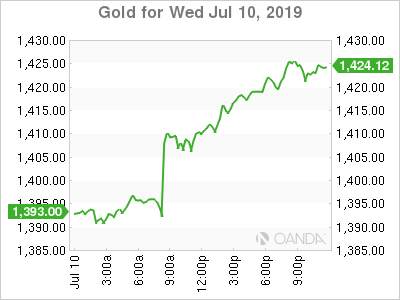 The metal broke through the $1,400 price level and is trading at $1,419 ahead of another day of Powell being grilled on American monetary policy, this time by the Senate committee.

A soft dollar, trade war and Middle East tensions have put gold higher with the metal retaking the crown as top safe haven.

The S&P broke through the 3,000 point level Wednesday for the first time ever as the Fed Chair did not go off his dovish script. The Fed has been telegraphing an interest downwards move since January and by removing some language in June and even a Fed member voting for a rate cut then it set off market anticipation that the end of July would bring the first cut under Powell’s leadership. 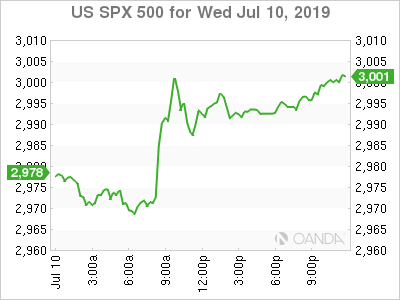 The Fed chief was more focused on the headwinds facing the U.S. economy and did not let his optimism on growth get too much airtime, leaving the market with a dovish impression. The balancing act by Powell of being dovish, but not going full dove and injecting pessimism into the stock market was achieved.

A July rate cut is fully priced in, but a stronger than forecasted NFP report in June put a question mark on how many more cuts does the Fed need to make. The trade war with China is a major factor and if there is an agreement in the short term the central bank could leave it at one and done for the year.

The most popular cryptocurrency fell more than $1,000 on Wednesday after Powell’s comments on Libra. The policy-maker said that Libra raises many serious concerns when asked about it during his testimony before the congress committee. 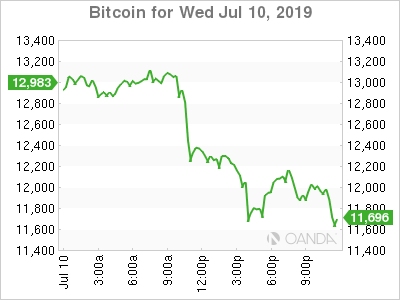 Bitcoin also fell from profit taking as investors saw the $13,000 price level as a good exit point. The combination between outflows and concern from the US central bank on Facebook’s wallet pegged the cryptocurrency lower.