Canadian Dollar: Too Much, Too Soon?

The recent appreciation provides some opportunities

The value of the Canadian went up too much, too fast over the last few weeks. Yes, the Bank of Canada changed its narrative recently; away from its very accommodating stance to a more neutral tone. However, in our opinion, this adjustment in policy is overly perceived by market participants as a hawkish outlook on Canadian interest rates. Fundamentally, nothing really changed in Canada over the last few months: Did we really believe, as late as a month ago, that the was going to keep its policy rate at 0.50% forever?

What the Bank of Canada signalled – starting with Deputy Governor Caroline Wilkins on June 12th and later confirmed by Governor Stephen Poloz on a few occasions and Deputy Governor Lynn Patterson on June 28th – was not that the beginning of a tightening cycle but only its intention of removing the emergency 50 basis point cuts that it had put in place in early 2015 when oil prices collapsed. It was rightly felt then that falling oil prices, threatening the economies of Alberta, Saskatchewan and Newfoundland & Labrador, could trigger a recession in Canada.

Yet, at the time, the rest of the country was doing just fine and some parts of the country may even have enjoyed the rate cuts a little too much: Housing prices in Vancouver, the GTA and surrounding areas did get out of touch with fundamentals in the last year or so. Under such circumstances, the B.C. government last summer, and later that of Ontario, felt obliged to adopt some targeted administrative measures to calm regional real estate activities. Partially taking the punch bowl away, the Bank of Canada implicitly acknowledged that the real estate party had gone on long enough; one objective of the central bank being to prevent frothy housing conditions from developing further and unhealthy imbalances from building up; thereby limiting the threat to the financial stability of the country.

This announcement happened earlier than anticipated by market participants but fundamentally the Canadian economic outlook is unchanged, other than the bank finally recognizing the obvious; namely that, during the first half of the year, the path to recovery had improved.

Governor Poloz had subtly started to signal his intention to reign in its very accommodative monetary policy during a speech in Mexico on May 4th: “While the adjustment process (to the oil shock) in Canada has been complex, and very difficult on a personal level for many, we are seeing encouraging signs that the worst may be over.” However, markets were apparently not listening.

The main reason the bank did act sooner than later by raising rates by 25 basis points on July 12th, in spite of fall in prices from the mid-50 US$ to the mid-40 US$ in recent weeks, is that it now firmly believes that the oil crisis is behind us and that it would be counterproductive to maintain the overnight rate at 0.50%; accordingly, the MPR slightly finally upgraded the Bank of Canada’s real GDP growth forecast in 2017 (from 2.6% to 2.8%) and 2018 (from 1.9% to 2.0%). However, if oil prices were to fall further and languish below the 40 US$ mark for a while, these new estimates would be challenged.

The Bank of Canada is now estimating that the 2015 rate cuts are no longer needed. However, this does not mean that it thinks that rates should necessarily rise beyond the 1% threshold. In its July 12th statement, the Bank of Canada appeared hawkish because it seemed that the Bank of Canada was taking for granted the next 25 basis point rate uptick. It rather focused the market’s attention on its policies beyond this second rate hike which is currently scheduled to occur at some point in the fall.

However, nothing in the statement and the press conference that followed suggests that the bank is ready to move beyond that point any time soon. The bank reiterated several times that it will remain data dependent and, for now, the data is pointing to inflation below the target for longer.

Looking more closely at what the Bank of Canada said, the market should eventually recognize that, beyond the removal of the emergency cuts by the end of the year, its tone was rather quite neutral. On the one hand, in the July MPR, the bank upgraded it growth forecasts and moved up (from mid-2018 to the end of 2017) the time at which point the output gap should be closed. On the other hand, its inflation forecasts were lowered; even if it thinks that particularly low recent inflation reads are transitory.

The BoC is forecasting that inflation will stop falling after the third quarter but that it still will be difficult to meet the bank’s 2% target, even over the medium term horizon. In this context, rate hikes above 1% appear difficult to justify and implement.

Several factors should also help keep in perspective the probability of further policy rate hikes in Canada. For now, the most difficult variable to gauge is the impact of the fiscal stimulus in the U.S. (tax cuts and infrastructure spending) on economic growth. Corporate tax cuts could tilt competitiveness in favour of U.S. firms, which would damper the Bank of Canada enthusiasm towards raising rates; and hence negatively affect the Canadian dollar. On the other hand, a U.S. fiscal stimulus would, without a doubt, provide an impulse to growth in the U.S. which would positively affect Canada’s economic outlook and support the . 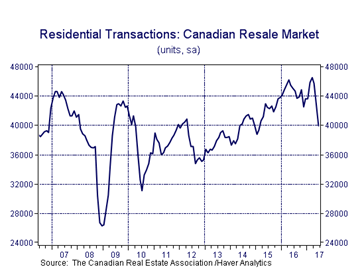 However, U.S. fiscal measures are not being adopted as fast as initially anticipated by market participants earlier this year; and we do not know if they ever will be. As such, the Bank of Canada removed the U.S. fiscal stimulus from its scenario. Moreover, the uncertainty surrounding NAFTA renegotiations and their negative implications for Canada has not dissipated; the U.S. is incidentally expected to release its NAFTA objectives today. Although we may have become more numbed to such developments, there are still risks and roadblocks ahead in this file that could cause the Canadian growth outlook to deteriorate.

Another issue of concern is what will happen to heavily indebted households in the context of rising rates: Supporting a 50 basis rate increase may be all what these households can bear; at least until later in 2018. What would be the impact of such mortgage rate hikes on housing prices in a sector already under pressure from recently adopted administrative measures aimed at cooling the housing market? It is worth noting that, in the last few months as illustrated below, Canadian residential transactions on the resale market dropped by 14% during the last three months (see chart above). Housing resale activity being an important component of economic activity in many provinces, if this downward trend was to persist, it could soon negatively affect the country’s growth outlook.

Furthermore, the Canadian oil sector outlook had improved early in the year but now looks a bit gloomier. Even if the sector can breathe easier today than it did in 2015 and 2016, oil prices may need to firm up permanently for Alberta and other oil producing provinces to pull out of their funk once and for all. Rising interest rates are also nothing to help the oil patch keep its activities into profitable territory; providing grounds to hold the overnight rate at 1% for a while longer.

Moreover, surging oil exports in the first few months of the year, while both volumes and oil prices were up, were hiding the dismal performance of other Canadian exports. If oil prices were to remain in the doldrums for a while, the Bank of Canada would have a hard time pushing for higher rates for fear that weak export growth would deteriorate further.

Finally, the risk of global slowdown, provoked by some geopolitical crisis or a downturn in China for instance, is not to be neglected. Geopolitical tensions have increased in many parts of the world. BRIC countries – the bedrock of global growth during the last decades – also appear to be plagued by imbalances and structural problems of their own that could unravel if not adequately addressed.

For all of the above reasons, we believe that market participants will soon adjust their expectations regarding rate hikes in Canada. For now, they seem to be thinking that the Bank of Canada will be more restrictive than the Fed over the next few quarters.

What we have here is a case of divergent messages from central bankers. While the Fed speaks in a dovish tone, it is likely to march ahead with rate hikes and the partial reversal of QE. On the other hand, other major central banks (the BoC, ECB and BoE) may be speaking with a more hawkish voice, but are likely to continue providing – albeit at a slower pace than in the past few years – more monetary stimulus in 2017 and 2018; including the Bank of Canada once its 50 basis point emergency cut of 2015 has been removed.

We believe that this concerted effort on the part of central banks, expressed through an unusual but intentional communication strategy, originates from their desire to prevent a disorderly appreciation of the U.S. dollar and to contain the global financial instability that may ensue.

In our view, this situation offers an opportunity to buy Canadian bonds in the 2-5 year maturity range and, from a tactical point of view, sell the Canadian dollar. However, because we anticipate oil prices to rebound in the fall, we expect the sell-off in the CA$ to be short-lived and the Canadian currency to appreciate further in the fall; and, by year-end, climb back towards 1.25.

A CA$ appreciation this fall, on the back of higher oil prices, should also convince the Bank of Canada to stay put on rates for a while; once its policy rate reaches 1%. This should help to prevent a further strengthening of the CA$ beyond 1.25. Such currency overshoot would negatively affect non-oil exports and risk lowering Canadian inflation (via lower import prices and lower economic activity). Alternatively, if we are wrong and oil prices remain low in the fall, economic growth in Canada will remain modest and inflation will remain well below its target for even longer; removing any rationale for the Bank of Canada to raise rates further.

This outlook reinforces our view that, once the emergency cuts have been removed, it is likely that Canadian to will eventually fall back and remain low until mid-year 2018. As we expect the Fed to start tightening further by year-end – and certainly earlier than other major central banks – we also anticipate the 10-year interest rate to increase in the U.S. relative to other similarly maturing bonds elsewhere. However, as Canadian generally follow those in the U.S. in a proportion of about 70%, the Canadian yield curve should also steepen in the 5 to 10 year segment by year end.

While, our reading of what should happen on the bond market is relatively forthright, our perspectives on the Canadian dollar are less unidirectional. We first expect the CA$ to lose some steam in the summer while the oil outlook is still under a black cloud of pessimism, to then regain some strength in the fall as OPEC’s strategy finally bears fruit. Complicating matters are the threat of the NAFTA renegotiations and the possibility that the U.S. adopts corporate tax reforms which could tilt competitiveness in favour of U.S. firms. The Canadian dollar would then have to adjust downward to compensate. On the other hand, an aggressive U.S. infrastructure plan could provide a boost to the CA$ but we expect such plan, if enacted, to only have an impact in the second half of 2018 or beyond.