The Canadian economic momentum is good but not great, according to the two economic reports released today.

First, real GDP expanded at a brisk pace in April (+0.3% m/m) on the heels of a 0.5% m/m improvement the previous month. Real GDP growth on a year-over-year basis accelerated from 1.0% in February to 1.5% in April (see chart). Unconventional oil production rebounded this spring, one of the key drivers behind this improving positive momentum in real GDP. Excluding the energy sector, however, real GDP growth would have been flat in April relative to the previous month.

In other goods-related sectors, manufacturing activity contracted again even when excluding the temporary closure of auto plants in Ontario. Residential and non-residential construction activities continued to progress at a respectable clip, reflecting the spring’s rebound in resale housing transactions and continuously robust public investments in infrastructures. Areas of sustained strength are also noticeable in services-related industries, led by professional, scientific and technical services.

Second, the Bank of Canada mentioned that “Results from the summer Business Outlook Survey point to a slight improvement in business sentiment after a moderation in the previous survey. Investment and hiring intentions continue to be healthy.”

The slightly improvement in the business outlook survey indicator, a gauge of overall business sentiment, suggests a slight acceleration in real GDP growth going forward (see chart). We also see the improvement in the balance of opinion on future sales, driven by both domestic and foreign demand, as a constructive development given that the summer BOS was conducted when U.S.-China and China-Canada trade tensions escalated in May. The survey’s respondents also highlighted an easing in credit conditions, another factor that could prolong the cycle.

Bottom Line: For now, real GDP growth is running above the BoC April Monetary Policy Report forecasts. The Business Outlook Survey encouraging results also reduce the needs of an “insurance” rate cut in Canada. Our new base-case scenario is that the BoC overnight rate target will remain at 1.75% this year and next, below the current CPI inflation rate. This being said, the situation could change rapidly.

First, markets eagerly wait for the outcome of tomorrow’s meeting between U.S. President Donald Trump and Chinese President Xi Jinping at the G20 in Osaka, Japan. Second, a growing number of Canadian farm producers are hit by Chinese-Canada tensions. Trade anxiety reached a new level in Canada following the Chinese ban on pork and beef products. This latest ban was not captured in the Summer Business Outlook Survey responses collected in May. In our view, an escalation in global trade tensions or an aggressive Fed cutting its policy rate by more than a cumulative 50 basis points appear necessary at this stage to force the BoC to shift from a neutral to an easing bias. 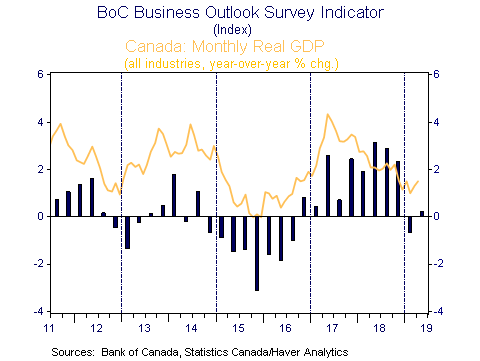