Something apparently went wrong in Ottawa this morning, as Statistics Canada released the 2018 Q4 economic accounts about 15 minutes before 8:30 a.m. In any case, the report is unambiguously weak. Nominal GDP contracted for the first time since the 2015 oil shock (-2.7% q/q annualized). Real GDP was virtually flat during the quarter (+0.4% q/q ann.), below consensus (+1.0%) and our 0.8% estimate. Without the strong business inventory accumulation, economic activity would have contracted by 1.1% during the quarter. Moreover, real GDP declined by 0.1% m/m in December, implying that the fading momentum continues going into 2019.

Besides the inventory buildup, the other major expenditure components of real GDP disappointed. There is a clear sign of household spending fatigue. First, consumer spending advanced at its weakest pace in this decade long business cycle (+0.7%). A decline in consumer spending of goods was more-than-offset by a moderate increase in services consumption. Second, the 14.8% drop in housing activity was the most severe contraction observed since the 2009 global crisis. The three subcomponents of housing activity declined at a double-digit pace: ownership transfer costs pulled back by 10% due to weaker resale market transactions, renovation activity declined for a second consecutive quarter (-10%) and homebuilding activity fell for a third consecutive quarter (-20%).

The most disappointing development for the Bank of Canada is the absence of a steady improvement in capex spending from companies: M&E business investment (-4.8%) pulled back for a second consecutive quarter and non-residential building investment (-15%) declined for a fourth consecutive quarter. Without increasing production capacity, it is difficult for Canadian companies to export more: exports edged down (-0.2%) while imports fell (-1.1%), echoing the global slowdown observed in late 2018. In addition, the fiscal policy tailwind took a breather in 2018Q4 as public investment in infrastructure projects surprisingly fell.

Altogether, the softer momentum observed during 2018 implies that the economy was likely not running near full capacity, as the BoC was previously assessing. It clearly increases the risk that the BoC might not be able to increase its policy rate during 2019. In the January policy decision statement, BoC officials judged “that the policy interest rate will need to rise over time.” The case to eventually reach the neutral rate certainly declined today. This being said, seeing an acceleration in economic growth as the year unfolds is still possible, thanks to the easing trade tensions between the U.S. and China, the improving financial conditions observed over the last two months and the upcoming improvement in crude-by-rail shipments in Alberta. At the same time, the build-up of vulnerabilities such as the heavy refinancing calendar for U.S. corporate debt, the possible escalation in trade tensions between the U.S. and the German auto industry, as well as the increasing odds of a delay in the ratification of the CUSMA deal, could postpone the next BoC policy rate hike beyond 2019. 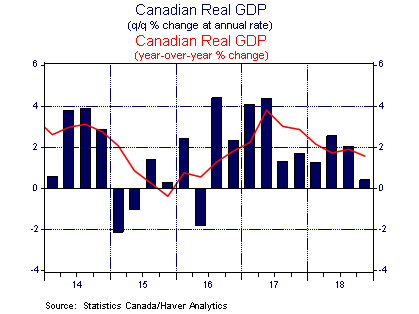 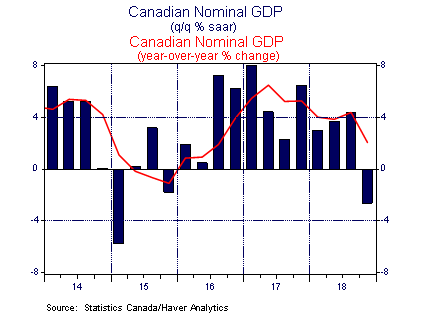