Last week’s statement accompanying the Bank o Canada decision to keep the policy rate at 1.25% included this particular upbeat comment: “solid labour income growth supports the expectation that housing activity will pick up and consumption will continue to contribute importantly to growth in 2018.” We agree with this sentence. According to the Labour Force Survey, total labour compensation of Canadian workers is up 6% year-to-date (see chart). So far, this robust wage increase fully compensates for rising household debt payments: the debt-servicing ratio was stable at 14% in 2018 Q1.

We expect the LFS job report for the month of May to bring positive news relative to growth in total labour compensation, preventing a rise in financial stress among Canadian households and facilitating the removal of further monetary stimulus in the short-term by the BoC.

First, we expect a net creation of 22,000 jobs (consensus also at +22K). Our call is based on an expected strengthening in specific industries:

Second, we expect Canada’s unemployment rate to remain unchanged at 5.8% for a fourth consecutive month. Nevertheless, unused labour resources have been shrinking. For instance, the number of involuntary part-time workers, representing only 9% of all part-timers, continues to fall steadily. Also, the intensity of labour shortage experienced by companies is at its highest in the current business cycle, according to the BoC’s Business Outlook Survey (see chart). Altogether, we expect average hourly earnings of all employees to stay in the fast lane (+3.6% year-over-year in April), another positive support for total labour compensation. 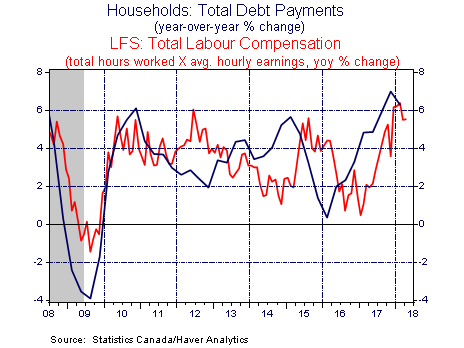 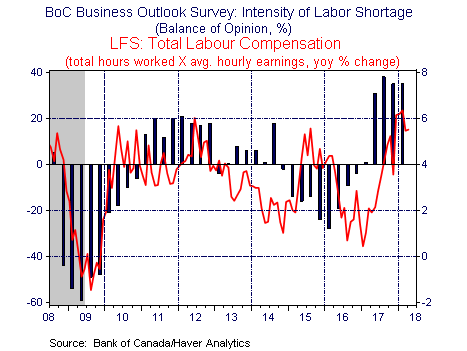