This week is rich in Canadian economic data as several high-frequency indicators will give the Bank of Canada (BoC) its first clues about how quickly it should raise policy interest rate to its “neutral stance” — i.e. the theoretical rate at which monetary policy stance is neither accommodative nor restrictive. Indeed, positive surprises would increase market expectations of a rate hike in December, currently sitting around 30%.

First, on Wednesday, we expect a weaker than consensus monthly report fort August (-0.1% vs 0.0% m/m). For one, the trade services (retail and wholesale trade) and manufacturing reports, representing 22% of GDP, lightly contracted during the month. Then, on the back of transportation issues, the production of oil should have declined as well, having a negative impact on transport services. A partial offset might come from electricity production as August saw record high temperature levels. Still, even with a 0.1% m/m decline, year-over-year GDP growth would be 2.3%, a tad lower than in July (2.4%). Hence, the economy could still be seen as running “above its potential,” estimated by the BoC in a range of 1.5% and 2.1%. Moreover, as the average monthly GDP growth for the last two years was 0.25%, the bar is set low for an upside surprise on Wednesday (see chart).

On the employment front on Friday, the pace of job creation very likely slowed down this month after a large jump (+63K) in September that was due to a rebound in part-time employment (+80K). Nonetheless, with the gap in employment creation between the Survey of Payroll, Employment, Earnings and Hours (+1.3% year-to-date) and the Labour Force Survey (+0.3 year-to-date) being large so far in 2018, self-reported employment probably has enough room to grow to post an aggregate job gain in October. We expect a 28K m/m employment gain (consensus at 12.5K). Besides, some bounce back is still expected from highly demanded workers in industries such as professional, scientific and technical services following the weak August report. Finally, the employment gain is unlikely to be sufficient to move the unemployment rate away from 5.9%. 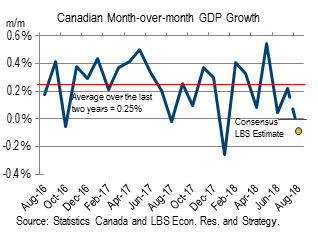