HomenewsCurrency ForecastChart Of The Day: 3 Reasons The Australian Dollar Is Set To Extend Its Selloff

Chart Of The Day: 3 Reasons The Australian Dollar Is Set To Extend Its Selloff

There appears to be a perfect storm of events setting up to pressure the lower.

After the US Federal Reserve surprised markets in mid-June by moving up its timeline for tightening—which will include at least two quarter-percent rate hikes by the end of 2023—last week, Australia’s central bank, the Reserve Bank of Australia let it be known that it expects record low rates until the end of 2024. Of course, investors buy assets in currencies that pay higher interest rates, while tending to short those with lower rates.

On top of that, Australia’s ongoing trade dispute with China, its biggest two-way trading partner, which began in 2020, cost the Land Down Under about “about $3 billion in commodities sales last year,” according to Bloomberg. The cold war between the two countries has yet to be resolved.

As such, the Aussie has three catalysts working against it: an extended period of interest differentials, ongoing diplomatic fallout with China and the re-escalation of the pandemic. Just one of these themes would be enough to hurt the Australian dollar. All three make additional declines of the currency all but certain.

Here’s what that looks like on the technical chart: 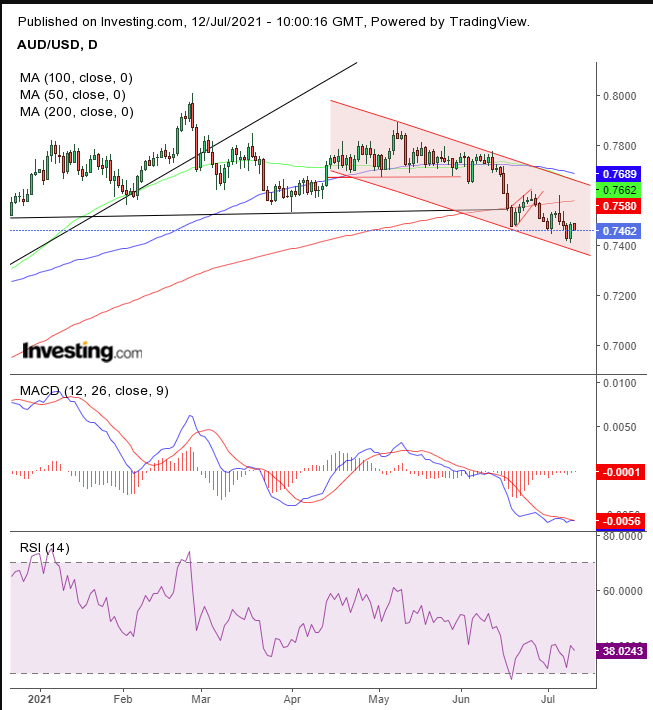 The AUD/USD was trading along a rising wedge, providing bears with a chance to cash out after a near -4% move. Once done, they had the chance to reflect on whether the move was overdone, and whether it was warranted.

That profit-taking included some traders making the opposite trade, buying back the Aussie, which increased supply and limited demand, enabling the currency pair to rise.

However, the congested nature of the rally reveals it’s a crowded trade. There’s still ample supply to keep the AUD depressed.

The proof: when the supply drowned out demand and sellers kept selling, below the flag. Also, the price retested both the flag and the 200 DMA on June 6, forming an exceptionally long upper shadow, a bearish indicator, showing how far down sellers were willing to go to find buyers.

Notice the location of the flag. It’s right on the neckline of a large H&S top going back all the way to December, as well as the 200 DMA. It’s obviously a crucial inflection point. The 50 DMA meanwhile crossed below the 100 DMA, heading toward a potential Death Cross, to “finish the job.”

The AUD/USD has started sliding down a falling channel, allowing the Aussie dollar to rise in corrective mode toward the declining ceiling before it extends another leg down. Oversold conditions for both the MACD and RSI suggest circumstances are ripe for such a temporary rally.

Conservative traders should wait for the price to trigger a return move that would retest the neckline of the H&S and channel top, before risking a short position.

Moderate traders would wait for the same return move, for a better entry, if not for further confirmation of the downtrend.

Aggressive traders could enter a contrarian, long position, after yesterday’s bullish engulfing pattern and the oversold conditions, toward the channel top. However, this is a risky position and should only be taken if you’re OK with losing. Trade only with a preset coherent plan that justifies the risk. Here’s an example: