The has moved higher for a third consecutive week. The AUD/USD pair is also advancing for the 8th out of 9 weeks.

While the coronavirus pandemic ended a three-decade long, economic boom in the land down under, with ‘only’ 7,204 cases reported, and a fatality rate of ‘just’ 103 as of today, Australia’s situation is much less precarious than that of the US right now, where the number of reported cases is closing in on 2-million and the death toll is over 106,000 and building.

Australia’s first quarter , scheduled for release on Wednesday, is forecast to fall to -0.3% from 0.5%. That would be the antipodean country’s first quarterly decline in nine years.

Annual growth, which was 2.2% in 2019, is expected to slow to 1.4%. If the quarter ending in June contracts, as well as that of March, it would be Australia’s first technical recession since the early 1990s.

However, Deutsche Bank predicts 0.1% Australian growth in March, partly because of a lockdown-down driven run at supermarkets and consistent .  If this prediction is realized, Australia will have sidestepped a technical recession—defined as two consecutive contracting quarters.

As for the US: its economy contracted in the by a whopping 5.0%, and the Fed is expecting another 30% plunge in growth. All things being equal, that gives the Aussie dollar a strong advantage over its American counterpart.

Such a scenario may also be the catalyst that will reverse the AUD’s long-tern downtrend. Right now it’s approaching a crossroad between the uptrend line since the March bottom and the downtrend since the January 2018 high. 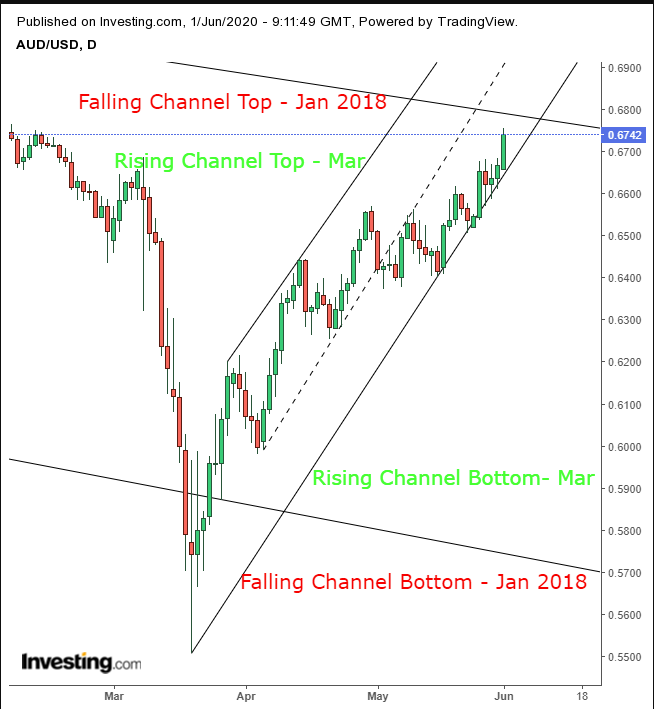 The AUD/USD rebounded from the March low, trading within a rising channel to 0.7% from top of a falling channel since the January 2018 top. Technically, the long-term is presumed to dominate the short-term.

However, the relatively better economic situation down under may trigger a reversal. Therefore, other than traders who are both aggressive and disciplined, investors should wait for the end of one of the conflicting trends, before picking a direction.

Moderate traders might be content with following a breakout of the respective channels, then wait patiently for the corrective move to play out, to gain a better entry.

Aggressive traders may short with evidence of resistance below the falling channel top and go long with its upside breakout.