Chart Of The Day: Brexit Breakthrough Could Spur Pound Breakout

Yesterday, at 9AM EDT the jumped over 1 full percent within 60 minutes, its biggest one-hour advance of the year. The surge was propelled by reports that Germany is prepared to compromise on the UK’s future economic commitments to the EU.

While traders quickly took profits, trimming some of the gains from the near-1.3 level down briefly to below 1.2880, cable has managed to climb back again to the 1.2960 price level. 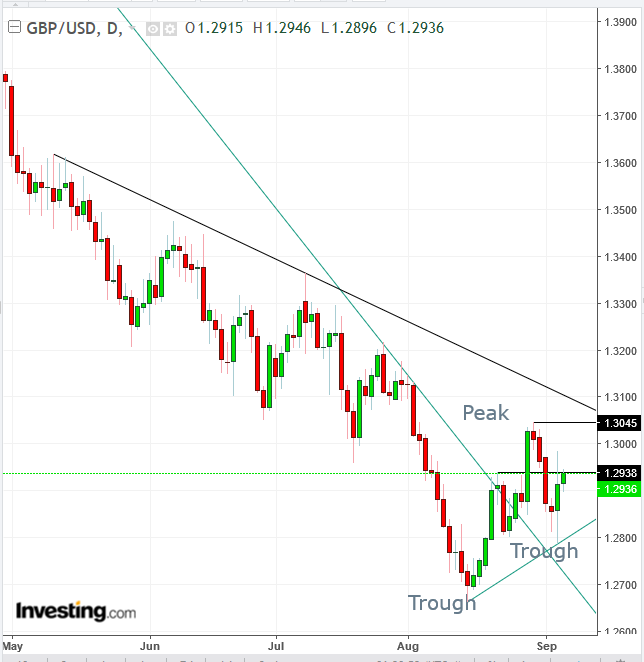 Though the pound has been free-falling since April, on Monday of last week it crossed above its uptrend line for the first time since the fall began. After the breakout it fell again in a traditional return move and found support above the broken uptrend line, as market psychology reversed from resistance to support.

Should the price continue to rise above its breakout peak of 1.3045, which was posted on August 30, it will have formed a second peak, completing two ascending peaks and troughs, thereby establishing an uptrend. Note that a new peak will likely coincide with a climb over a more tempered downtrend line in place since May, revealing that 1.3 level as a crossroads for the trend.

Conservative traders would wait for a new peak on a closing basis as well as a decisive upside breakout of the tempered downtrend line since May, followed by proof of support, when demand has overcome supply. This market dynamic is demonstrated with the creation of a base, as a new support is created.

Moderate traders may enter a long position upon overcoming the late-August peak and the downtrend line since May. They may even wait for the potential return move but not necessarily for proof of a reversal but for a better entry.

Aggressive traders may enter a long position upon a close above 1.2938, the August 22nd high price. Today’s trading has bee flirting with that support/resistance level. Overcoming it suggests upward momentum.