HomenewsCurrency ForecastChart of the Day: Dollar-Yen Rebounds But Rising Flag Signals Selloff Ahead

Chart of the Day: Dollar-Yen Rebounds But Rising Flag Signals Selloff Ahead

Last week, the Fed downgraded its economic forecast and the 10-year Treasury yieldcrossed below the 3-month Treasury yield, which some view as the harbinger of recession. As well, Friday’s equities selloff continued into Monday morning, despite a slight respite provided by better-than-expected data out of Germany.

In the last couple of years—with pockets of exception amid the trade dispute—Japan’s yen has been the favorite haven asset. Indeed, the yen has been strengthening against the dollar since the dollar-yen pair hit the 112 level on March 5. In the following two weeks, the pair proceeded to develop a Head & Shoulders continuation pattern, whose completion accelerated its drop. 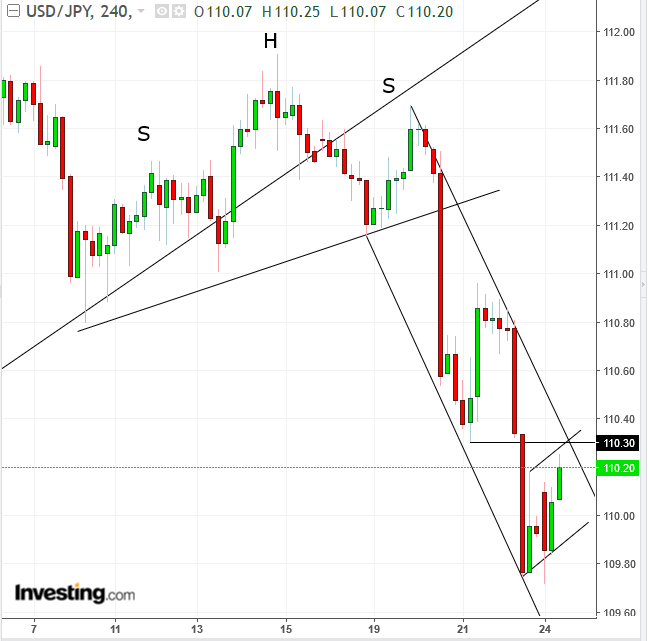 Today, the dollar is on the rebound. However, we consider this a correction within the downtrend, as manifested in the very clear descending channel. The pattern in which the dollar’s freefall paused is a rising flag, bearish in the downturn, as short sellers repurchase contracts to return to their brokers.

The downside breakout would be the trigger for another selloff, as desperate supply lowers offers to find willing buyers. Note that the rising flag’s formation is consistent with an upward correction from the lower boundary of the descending channel. Also, the flag conforms to the chart, with the previous trough providing resistance to the flag’s continuous rise, turning it into a bottom.

Conservative traders should wait for a decisive downside breakout, followed by a pullback to retest the pattern’s integrity, with at least one long, green candle engulfing a red or small candle of either color.

Moderate traders would wait for the breakout, and maybe even for the return move, for a better entry, but not necessarily to ascertain the trend’s consistency.

Aggressive traders may short at the upper boundary of the flag body, where the price reached 110.25.