Right now, the is languishing at a monthly low. That’s because yields also fell in the same proportion over the same period.

Among other catalysts, the slump also comes courtesy of the Federal Reserve which has repeatedly said it will not raise rates. But investors are growing skeptical after the central bank first played down spiking yields as nothing more than faith in rising demand amid a reopening economy, ignoring the possibility of escalating inflation while vowing that rates will remain lower for longer even if the Fed’s inflation targets are met.

Additionally, after a good run for the reflation trade in recent days, profit-taking was in order. Last week, value sectors such as Utilities (+3.7%) and Materials (+3%) led, while growth sectors Tech (+1.1%) and Communication Services (-0.1%) lagged.

As well, given that the reflation trade is based on rising inflation, it’s becoming harder to deny that inflation itself isn’t a market presence. After all, last week’s US consumer price releases indicated that rose 0.6% for the month, year-over-year.

That’s the biggest jump for those metrics since 2008. While it does make a powerful case for vaulting inflation, traders would do well to keep things in proportion. First, those measures included a 23% spike in gas prices, which is why economists prefer the metric, since it excludes volatile energy and food prices.

Second, the current measure of inflation is being compared to a period when the economy was shut down during the height of the pandemic. As such it doesn’t necessarily represent a true comparative gauge for the immediate economic situation. Technicals are also signaling a complex story. 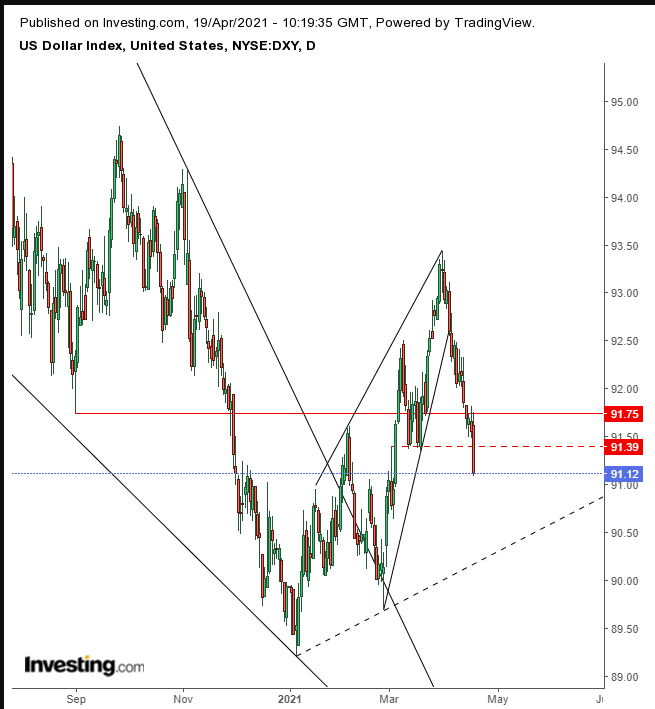 The dollar completed a rising wedge, bearish after the more than 5% plunge in the preceding two months between the Nov. 4 high and the Jan. 2 low. The wedge started off with both buyers and sellers agreeing that prices should go higher. However, buyers were less and less willing to pay for the dollar with each uptick, leaving sellers to continuously reduce their expectations, until the uptrend fizzled.

On the other hand, the price also completed an earlier, much larger wedge since the March peak. Thus, until the price doesn’t register below the Jan. 6 low, we expect the dollar to bounce and take out the Mar. 31 high.

However, if the Jan. 6 low breaks, we’ll return to our initial bearish stance.

As we see it, trading is a kind of dance; the more precisely you learn the moves and understand your partner the more elegantly you can dance with them. Therefore, right now we’re bearish on the greenback in the short-term, but remain bullish over the long-term.

The dollar could whipsaw in the short-term, stopping out poorly placed positions or those that are insufficiently funded. Here’s the ‘footing’ we recommend for the USD dance right now:

Conservative traders should wait for the dollar to either confirm the first wedge since March or beak it, before entering a position.

Moderate traders would go long when the price rebounds off the (dotted) uptrend line connecting the Jan. 6 and Feb. 25 lows.

Aggressive traders could short in the near term, before joining the rest of the market in what we foresee would be another rally, provided they understand the risk of going against the main trend and of the dollar already moving so far away from the rising wedge completion, having already completed roughly two thirds of its implied target.

Therefore, use a trading plan that fits your style and stick to it. Here’s a basic example:

Author’s Note: As the above title implies, this is just one sample of many possible approaches. Ultimately, you need to learn how to customize a plan to your budget, timing and temperament. Till then, we invite you to use ours, but for the purpose of learning purposes, not for profit, or you will end up doing neither.