HomenewsCurrency ForecastChart Of The Day: Euro Eyes A Return To $1.2000

After it was roughed up a bit last week, the ‘s trajectory is currently higher, at least in the short- to mid-term.

Fundamentally, traders—relieved after Italy’s nationalist parties finally formed a coalition late last week—bid up the single currency, suddenly making it a buying opportunity, at least for now. Over the longer term, however, an Italian government ruled by euroskeptics could be heading down a path leading to a second member nation leaving the EU, with potentially serious ramifications for the European Union’s financial system. 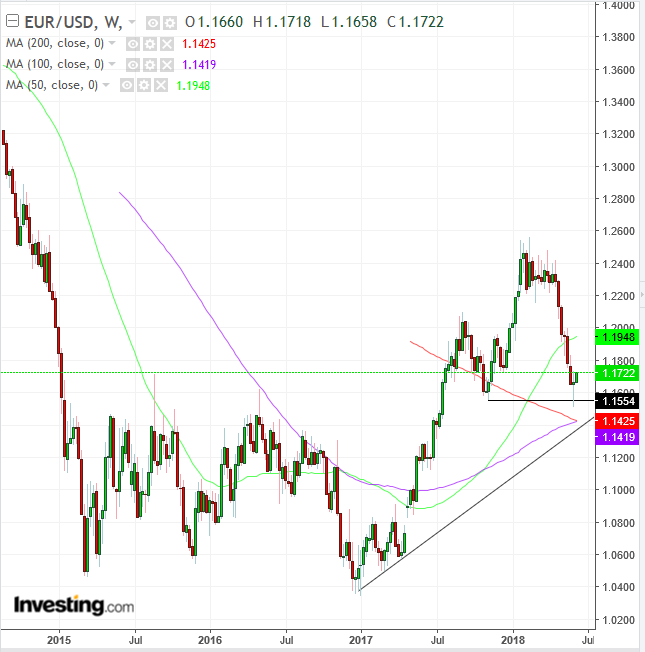 The euro relief buying coincided with the support of the 1.1600 price area, which itself confirmed the November 2017 support, after market psychology reversed a major resistance at that level, in place since February 2015.

It also happened to dip below and close above the midterm uptrend line since the beginning of 2017. The 200-week MA reveals the importance of that price level, and should the 100-week MA (blue), which has been climbing since mid-2017 cross above it, a bullish signal would be triggered, following the Golden Cross that’s already been activated, after the 50-week MA crossed above the 200-week MA earlier in the year. Finally, a high wave candle had been formed, suggesting that the bears are second-guessing themselves.

Conservative traders would sit this out and instead wait for a new peak to be formed above the 1.2557 level, posted in February, to confirm the uptrend is intact.

Moderate traders may risk a long position, should the 100-week MA cross above the 200-week MA. Alternatively, a pullback toward the 1.1600 price level would provide a risk-reward ratio too good to pass up, even before any further trend confirmation.

Aggressive traders may enter a position now, provided they can afford a stop-loss beneath the presumed support of the May low at the 1.1500 level. Otherwise, they should wait for a dip, till they can afford that stop-loss.

Since this is a weekly chart and a medium-term position lasting weeks, traders must exercise patience, but good things come to those who wait.