The is headed lower, pressured by a host of euro area problems. There’s the drawn-out EU-UK divorce settlement that’s still not resolved despite looming deadlines, and now the news of the possibility of Italy leaving the European Union because its government is having budgetary problems.

Worsening matters for the single currency, Italian sovereign bonds sold off on reports the country’s Deputy Prime Minister cautioned that the government might go over the EU’s deficit limit. 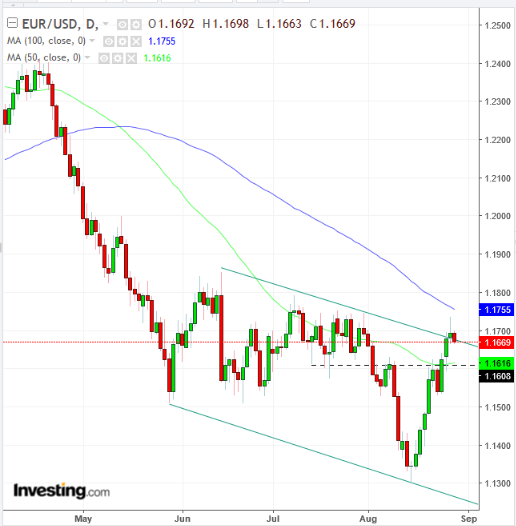 Technically, the euro hit a wall of selling resistance when it reached the top of its falling channel since mid-June, which itself was “guarded” by the 100 DMA (blue). Today’s solid red candle confirms yesterday’s high-wave candle’s bearish sentiment. If traders lacked direction yesterday, today there’s consensus—the euro is down.

The psychology behind a falling channel is that both buyers and sellers agree that prices should be lower. As such each buys or sells at ever lower prices.

The current euro weakness suggests that the pattern of supply overcoming demand at the top of the channel persists. A fall below the 1.1600 level, a support/resistance since mid-July, will increase the probability of a return to the lower end of the channel and challenge the August 15 low of 1.1299.

Note the 50 DMA (green) aligned with the 1.1600 level, demonstrating its importance in the supply-demand balance.

Conservative traders would wait for a new trough below the August 15 low of 1.1299 to confirm the downtrend.

Moderate traders may rely on the increased probability of a continued fall with a close below the 1.1600 line-in-the-sand for both bulls and bears.

Aggressive traders may short after the euro closes back in the falling channel.