The UK parliament votes later today on Prime Minister Theresa May’s latest version of a Brexit deal. She was able to obtain some last minute concessions from the EU that boosted the pound this morning, though at time of writing sterling has been falling.

During the last vote, in January, May suffered an historic loss in the House of Commons, when her earlier proposal was defeated by 230 votes. Adding to the UK prime minister’s perils, European Commission President Jean-Claude Junker warned that if the deal is again voted down, May will not be given a third chance by the EU.

Still, technical analysis of recent trade has been signaling FX markets might just be optimistic about a Brexit deal being reached. 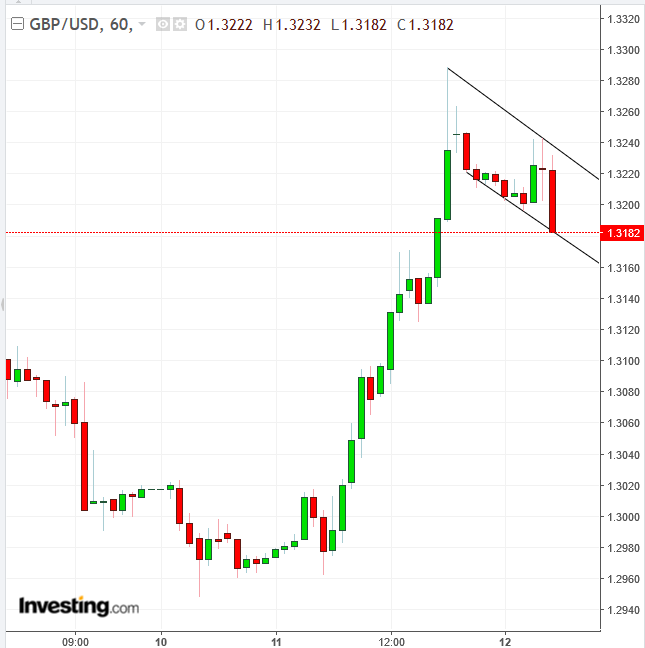 After jumping almost 2.5% in 15 hours, bulls have been taking profits since 18:00 EDT. However, the decline formed a congestion, suggesting sufficient new demand exists to absorb the former bulls’ supply.

An upside breakout would suggest a continued rally, as new bulls absorbed all the supply and are willing to up their bids to find additional sellers. At that point, former bulls would rejoin the rally, adding to the upward pressure. Finally, a short squeeze, compounded by already waiting long orders will help push prices higher.

The current pause takes place as traders anticipate today’s vote, which will trigger the next major move. Unless, of course, traders decide to speculate ahead of the vote, depending on risk aversion.

Conservative traders would wait for a decisive upside breakout, with a penetration to ascend above yesterday’s 18:00 peak at 1.3288, before a return-move to retest the pattern’s support, with at least one long, green candle engulfing a red or small candle of either color.

Moderate traders would be content to enter a long position after a breakout would register above 1.3242, above the flag’s highs, after its emergence. Then, they could wait for a return move for a better entry but not necessarily for proof of the trend’s integrity.

Aggressive traders may enter a long immediately, as the price is at the bottom of the pattern’s support, at the time of writing. It’s OK not to wait for the pattern to complete, provided traders understand the risks, accept them and plan their trades accordingly.