U.K. Prime Minister Theresa May is on a desperate mission to reach a Brexit deal; yesterday she released a video message on twitter explaining that since Parliament has made it clear it won’t accept a “No Deal” Brexit, the alternatives have been whittled down to just two—her deal or no Brexit at all. This unexpected initiative, more casual than her usual style, seems to have pleased traders, who reacted by supporting the pound, which is up 0.2% since late Friday, at 1.3051 at time of writing.

Ever since U.K. lawmakers made it clear they are adamantly opposed to leaving the EU without an agreement in place, the realization among investors that “No Deal” was effectively off the table has kept the U.K. currency above 1.3000 since Feb. 19. Now, however, something else may be shoring up sterling. Many observers agree that the U.K. would do better, even economically, without any Brexit at all. May’s statement raises the possibility that, if no deal is reached, but MPs won’t allow the country to crash out, then Brexit could conceivably be cancelled.

The idea of no Brexit, up to recently an almost inconceivable scenario, may also be the fundamental driver for what we see as a strong bullish technical picture, thus helping to fortify the pound’s surprising resilience through this crisis. 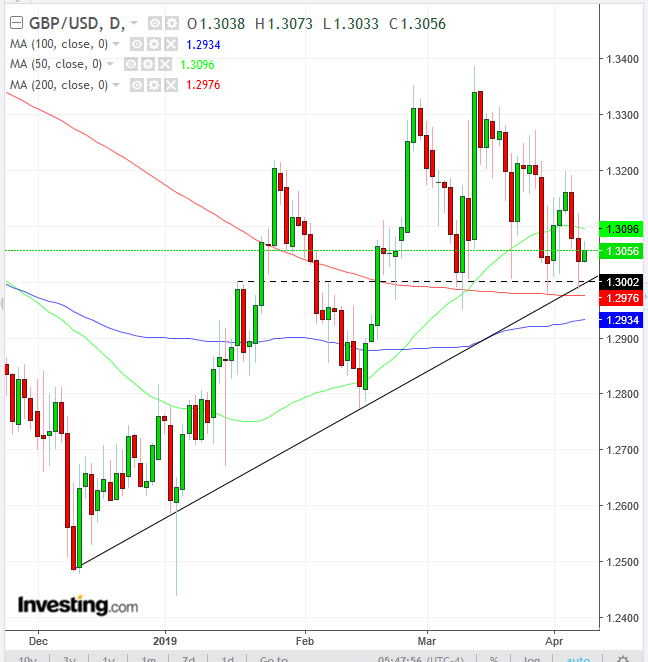 In support of our view since early March, the pound found support for the fifth time above the 200 DMA, as well as a sure foot above the uptrend line since December for the second time since late March.

Therefore, as long as the pound remains above 1.3000, we will remain bullish, with the expectation that sterling will retest the 1.3300 late February / early March peak.

Conservative traders would go long after the price demonstrates the uptrend’s integrity with a new high above 1.34 and avoid what may be too messy a picture with the sideways move since February.

Moderate traders may enter a long position—if the timing is right—with all their ducks in a row in terms of their entry point, depending on their risk aversion, with the 1.3000 entry being ideal.

Aggressive traders may enter at will, after writing out their trade plan.