HomenewsCurrency ForecastChart Of The Day: Profiting From The U.S. Dollar’s Reversal

Chart Of The Day: Profiting From The U.S. Dollar’s Reversal

The is being sold off right now for four reasons:

And the global reserve currency is likely to continue falling. Sellers have absorbed all the available demand above the psychological 95.00 level appear willing to sell for lower levels as they search for willing buyers. 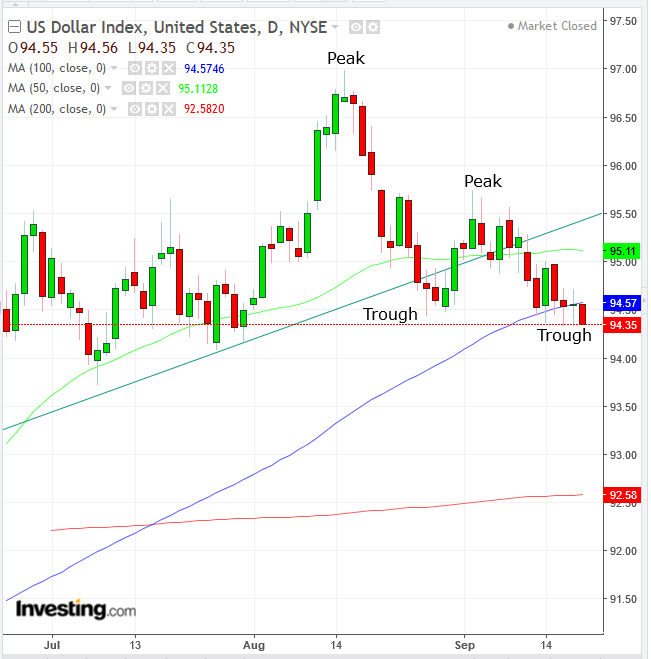 Conservative traders may wait for a more meaningful penetration of the 94.43 trough which was posted on August 28. The current penetration is less than 0.1 percent. A close below the 94.00 level may assuage their risk aversion. Then, they may wait for an upward correction toward the downtrend line since August 16 and the 95.00 key level and wait to see if it finds resistance. This would require at least one long, solid red candle, engulfing a previous green or small candle of any color, affirming the new downtrend.

Moderate traders may be satisfied with a close below the previous trough, beneath the 94.43 level. So far, the price penetrated four times, but did not close below. They may then wait for a return move for a better entry.

Aggressive traders may jump right in, provided they can afford a meaningful stop-loss or the risk of losing the position.

The rest is the same as above. Note: the only difference between the aggressive and moderate trade samples is the price move prior to the entry.