HomenewsCurrency ForecastChart Of The Day: Right Now Trump Can’t Keep The Dollar Down

Chart Of The Day: Right Now Trump Can’t Keep The Dollar Down

The rebounded from a six day selloff, after yesterday’s release of the showed that the US central bank has no qualms about continuing to , as long as the country’s economy stays on its growth course. This positive development for the global reserve currency overshadows, and in essence obviates President Donald Trump’s remarks earlier this week expressing his displeasure with the Fed’s current path of tightening, which would eliminate, in Trump’s words, “cheap money.”

The dollar bounce comes even after trade war concerns surfaced yet again, as talks between the US and China begin today in Washington. Even the president’s political future seems not to be having an impact of the USD, notwithstanding the fact that his long-time personal lawyer Michael Cohen pleaded guilty to Federal charges which may also implicate Trump in campaign finance violations. As well, his former campaign manager, Paul Manafort was found guilty of multiple financial crimes. 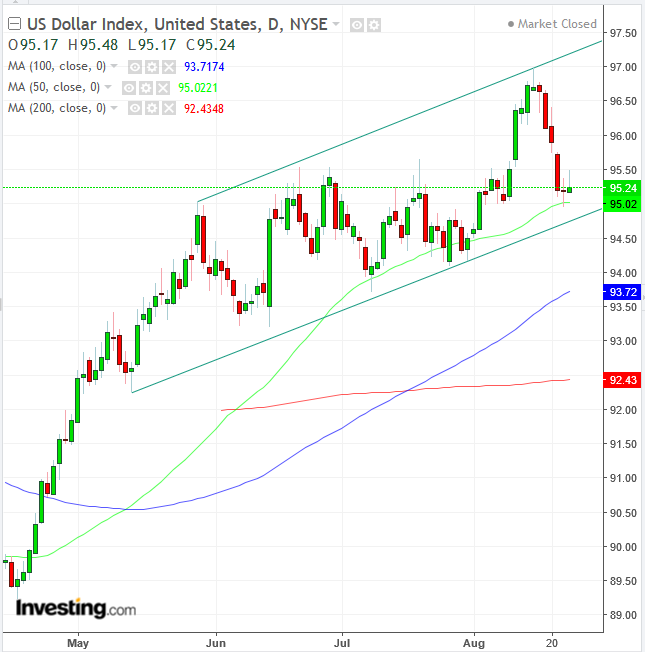 Technicals paint an even rosier picture. The rebound actually started from yesterday’s low, after the Dollar index neared the bottom of the rising channel since June, which is protected by the 50 DMA. The 100 DMA (blue) crossed above the 200 DMA (red), demonstrating that prices are rising in a broad set of averages.

Conservative traders might wait for a new peak to confirm the uptrend.

Moderate traders may wait for a retest of the channel bottom, for a closer entry, to limit exposure to a whipsaw.

Aggressive traders may enter a position after a close confirms that bulls had returned to carry the dollar within the rising channel.