Consensus has Russia’s central bank keeping interest rates unchanged—at 4.25%, a record low—when fiscal policymakers release their next on Friday. Rates have remained at that level since July 2020, in effort to stimulate the country’s economy, which shrank not only because of the coronavirus, but also because of the concurrent crash in the price of .

Russia exports more than 70% of its oil production, which, together with , accounts for more than a third of the country’s GDP.

Last month, the central bank declared it was ending its monetary easing cycle. This is nothing less than a dramatic development from the country’s policymakers, as the Bank of Russia may be one of the first emerging markets to increase rates since the start of the pandemic.

The policy change comes after pressure had been building on Governor Elvira Nabiullina to begin tightening after two years of the record low rate. Analysts at Morgan Stanley and Citigroup were among those that have been warning that the recent selloff—the result of threats of international sanctions agains the Kremlin because of the poisoning, then jailing of activist Alexei Navalny—exacerbated inflation amid soaring food prices.

To that effect, derivative traders more than doubled their bets on rising interest rates over the next three months, pushing the Russian government bond to new yearly highs. Also, given that energy prices are expected to rise as globlal economies reopen thanks to vaccines and stimulus, that could provide yet another boost for the Russian currency.

Finally, from a technical perspective, the supply-demand dynamic for the ruble itself has shifted. 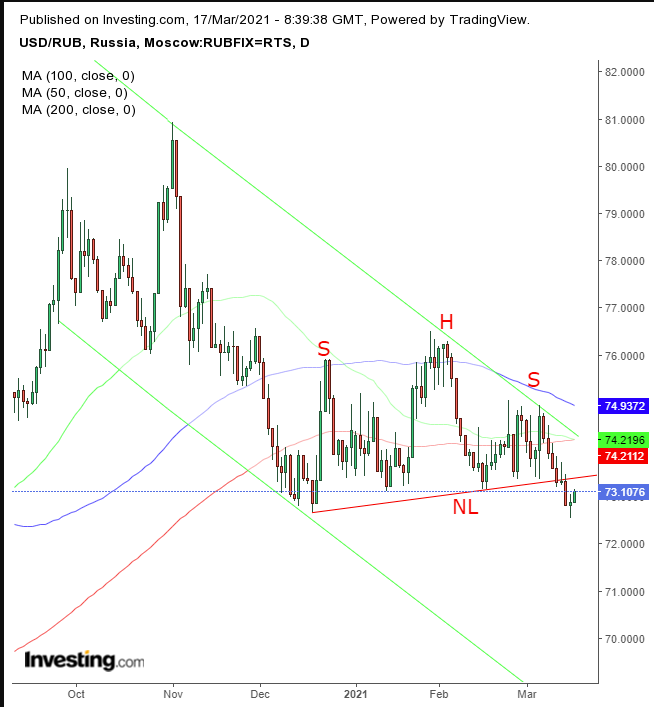 While we’ve been discussing the ruble, note that it’s paired with the dollar as its base. That means that if we’re bullish on the ruble, we’re bearish on the dollar versus the ruble.

The pair completed a H&S continuation pattern, which precisely fit within its falling channel. The 50 DMA is about to cross below the 200 DMA, triggering a Death Cross, demonstrating the current trajectory. The 100 DMA is resisting the channel, signaling its technical importance. The current rebound is finding resistance by the two previous lows, in January and February.

Conservative traders should wait for the price to retest the pattern’s integrity, then make another low.

Moderate traders would wait for a return-move for the better price, if not for confirmation of resistance.

Aggressive traders could short at will, provided they understand and accept the higher risk, incurred by not waiting for further evidence, that goes with higher reward. Money management is key.

Here’s an example of a basic but sound trade plan.