At time of publication, risk assets, including US futures and global equity benchmarks, are slumping, pressured lower by a trio of investor worries: geopolitical tensions after Afghanistan’s US-backed government collapsed in the face of a Taliban takeover; accelerating fears the Delta variant of COVID-19 will upend the post-pandemic economic recovery; and signs today from China, via data releases earlier Monday, that the world’s second largest economy could, indeed, be slowing.

No surprise then that investors have been rotating into safe haven assets, most recently US Treasuries and now the . Because Japan generally enjoys a , its currency remains in global demand, keeping its value in play, making the yen a haven currency.

Today’s China data, which showed a plunge in as well as a slump in has implications not just for soaring equity markets, but for and base metals markets as well. The Asian nation is the world’s largest importer of those commodities, among many others. If Chinese demand shrinks or evaporates, that could easily have knock-on affects on the entire global economy.

After a significant jump earlier this year, the USD/JPY pair has been fluctuating. Technicals show a tussle between the forces of supply and demand which looks to continue. 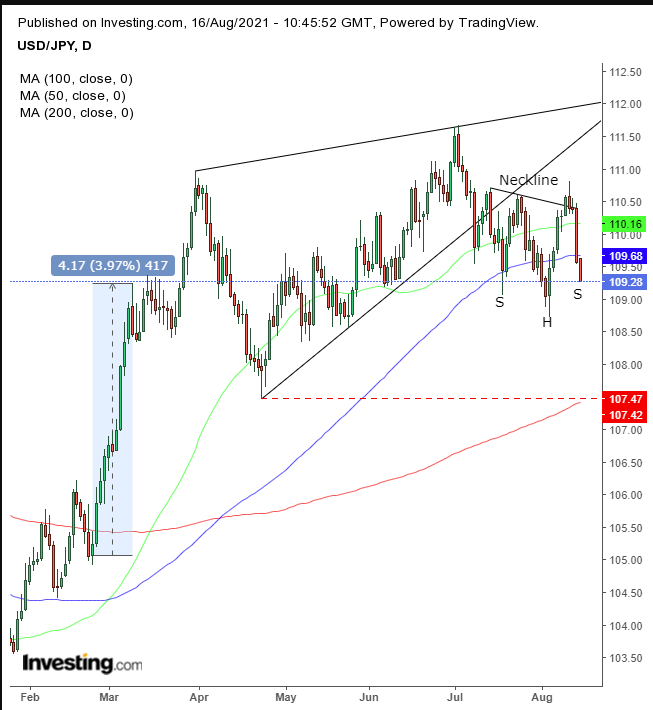 The yen added 8% of value between the beginning of the year and the end of March, its fastest advance since the recovery from the March 2020 bottom during the height of the pandemic. That means half of the gain was achieved in just two weeks, between Feb. 23 and Mar. 9.

However, the trading pattern that followed showed that while buyers were scooping up the yen at ever increasing exchange rates, sellers were keeping a lid on the advance. That activity played out in the form of a rising wedge, bearish after a climactic advance—the kind described above.

On July 8, supply drowned out demand, forcing the price below the wedge, since no buyers were found inside the pattern. The price, however, did find demand at the 50-DMA, which pushed the price back into the wedge.

That didn’t last, though. Two-and-a-half days of gains were then wiped out—demonstrating the bears’ prowess. Still, stubborn bulls gave it another go.

However, all their demand was met with ample supply, and then some. The price fell just after nearing the pattern bottom. It also fell to a lower point than where it had been after it first tried to return back into the wedge.

It seems that these particular bulls are especially hard-headed; they tried to breach the wedge for a third time. But this time, they didn’t even come close to the pattern. The previous two highs provided all the resistance required to reject their advance.

This trading pattern developed a small, H&S bottom, bullish if it breaks out to the topside. However, even if buyers were able to repel sellers, they would still have to contend with all the bearish interest that developed within the pattern, presumably providing severe resistance.

Moreover, if the yen keeps falling and blows out the would-be H&S bottom, it will force all the traders caught up with the currency to reverse their positions, thereby stopping out longs and triggering shorts. That would be in line with the overall dynamics of the wedge.

The price just fell below the 100-DMA for the second time since the previous low, something it hasn’t done since March 2020, the onset of a novel coronavirus pandemic. Notice that the 200-DMA has aligned with the bottom of the wedge, and is ready to catch it if it falls.

Conservative traders should wait for the price to fall below the wedge and the 200-DMA, then rally and find their resistance. The price has moved far from the wedge and can whipsaw them.

Moderate traders would wait for the price to return to the H&S neckline or alternatively fall below its head, blowing out the partner.

Aggressive traders could enter a contrarian long position, counting on the support of the H&S pattern to at least provide a bounce, even if not an upward reversal, provided they understand the risk of going against the crowd and have a plan that justifies the risk. Here’s an example: