HomenewsCurrency ForecastChart Of The Day: Tentative Hope For USD/CAD Bulls

Chart Of The Day: Tentative Hope For USD/CAD Bulls

It has been a volatile week as a bigger-than-expected jump in US raised tightening concerns mid-week. But as we start the last day of the week, the has weakened with stocks and futures sharply higher following Thursday’s rebound.

But will there be another twist today? US are on tap at 8:30 EST followed by a few other US macro pointers later including , and and indices. Will the US dollar react positively if US data, in particular retail sales and inflation expectations, show a big jump?

Ahead of the US data dump, the is among the key FX pairs to watch—and not only because of the above data releases.

From a technical point of view, the Loonie was testing THIS short-term support area after it formed what appears to be a possible reversal formation in mid-week: 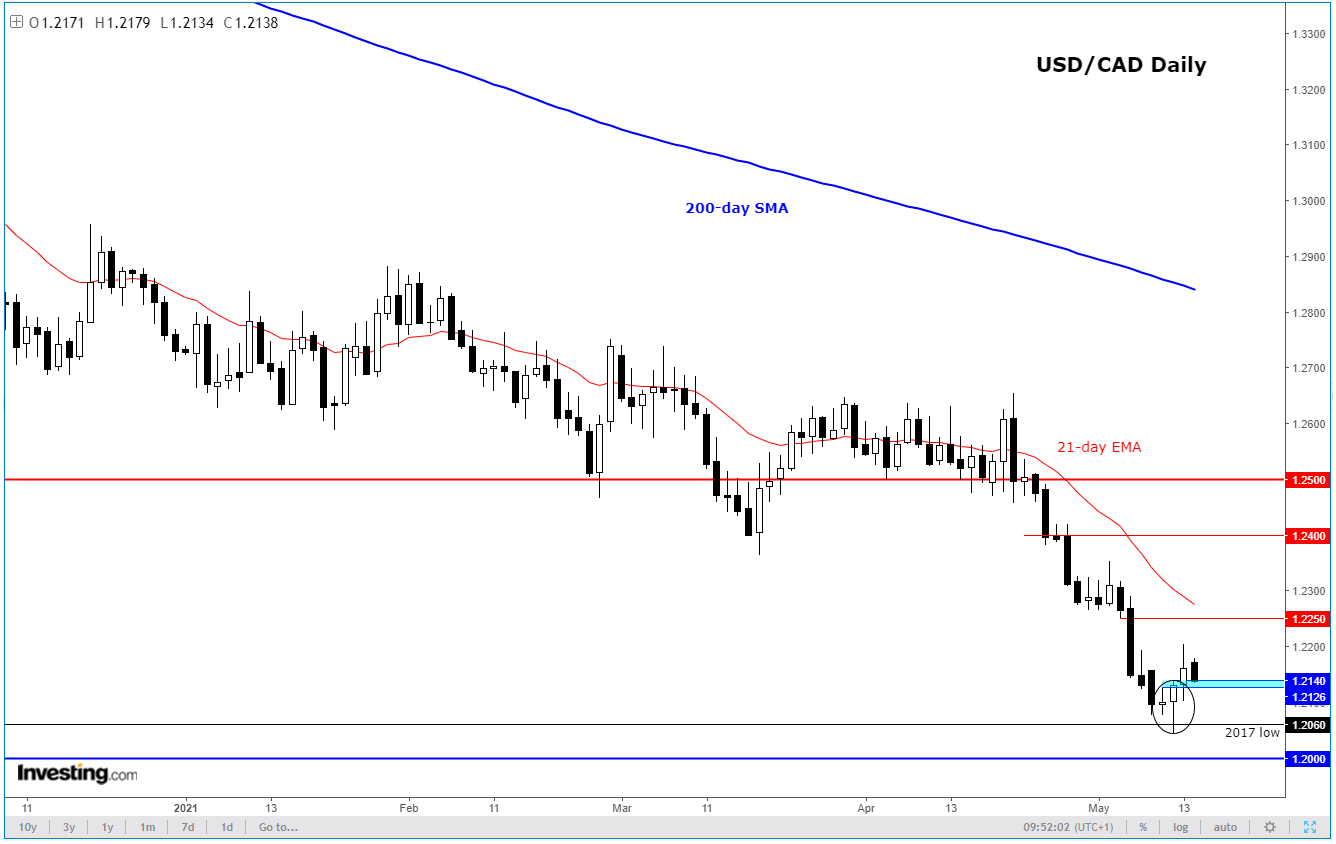 Will the US dollar bulls finally start defending support levels or is this yet another false hope for them?

The USD/CAD has been in a very strong downward trend ever since March 2020 as and other risk assets rallied. Recently, the pace of the Canadian dollar’s rally accelerated after the Bank of Canada became among the first major central banks to taper bond purchases. The US dollar meanwhile continued to sell off as it was used as a funding currency with investors continuing to pile in on Wall Street shares, causing the and to hit repeated new highs.

But this week, there was finally a bull signal for the USD/CAD in the form of a false break below the 2017 low at 1.2060 on Wednesday. After the price dipped below this level, it looked like 1.20 was going to be hit, only for the strong US CPI data to reverse the trend. The selling pressure suddenly eased, and the buyers returned which caused the USD/CAD to form a hammer candle (circled) after briefly dipping below that 1.2060 swing low.

With short-term resistance around 1.2125 – 1.2140 area broken, will this now turn into support, leading to another bounce after today’s weaker start for the USD/CAD?

If Wednesday’s price action was a genuine bullish reversal for the USD/CAD, then this is exactly where the bulls will need to step in today.

Therefore, if you see evidence of buying pressure coming back in around the 1.2125 – 1.2140 area on your lower time frames, then it may pay to consider looking for long setups towards the next resistance circa 1.2250. Potentially we could be talking about 1.24 or even 1.25 in the days to come, but let’s take it a step at a time.

However, while there is that tentative bullish signal to work with, in trading you should always be prepared to change your mind if conditions change. So, keep a close eye on the price action and see if it is doing what it ‘should’. Are your key support levels holding? Are the bulls stepping in where they should? Or are we seeing evidence of bulls getting trapped above broken resistance levels?

With that in mind, if the price breaks and holds below that 1.2125 – 1.2140 area then this would sharply reduce the odds for a continuation of the bullish trend we have seen since Wednesday. And if in the coming days the 1.2060 level gives way, then all bullish bets are off in the short-term outlook. In that case, look out for follow-up technical selling to at least 1.20 next as disappointed bulls rush for the exits.

That being said, my base case is now the bullish scenario until the charts tell me otherwise.