HomenewsCurrency ForecastChart Of The Day: The U.S. Dollar’s Uptrend Is Confirmed

Chart Of The Day: The U.S. Dollar’s Uptrend Is Confirmed

Since the start of today’s trade, the has been vaulting higher. It was jump-started by Friday’s hotter than expected release.

The metric was forecast to come in with 2% gain, but surprised instead, leaping to 0.6 percent, more than double the expectation and the fastest pace in six years. It rose on higher gas prices and escalating costs for industrial supplies critical for business.

Consumer inflation, the other side of the picture, will be released Wednesday morning in the US. Headline probably rebounded in October after easing in September. The consumer price inflation data is projected to show a 0.3 percent increase for the prior month and 2.5 percent for the prior year. is forecast to rise 0.2 percent from 0.1 percent MoM.

Rising inflation confirms the Fed’s trajectory for . On Thursday, during its , the Fed acknowledged the strength of consumer spending, since it boosted the economy to its strongest back-to-back quarters of growth in four years, when the US climbed to an annualized rate of 3.5 percent. It is noteworthy that this landmark occurred during a US-Sino trade war, a time when China’s economy has been shrinking.

Since the greenback’s yield is the US interest rate, the higher that gets, the greater the value of the dollar. Beginning in March, when the trade dispute first dominated headlines, the dollar has also served as the safe haven currency of choice.

As such, that market risk will arguably not slow down the US currency either. Thus, right now, the only headwind to the dollar’s ascent would be a sharp correction in equity markets. Should that happen, traders would sell off all risk assets, including the dollar. 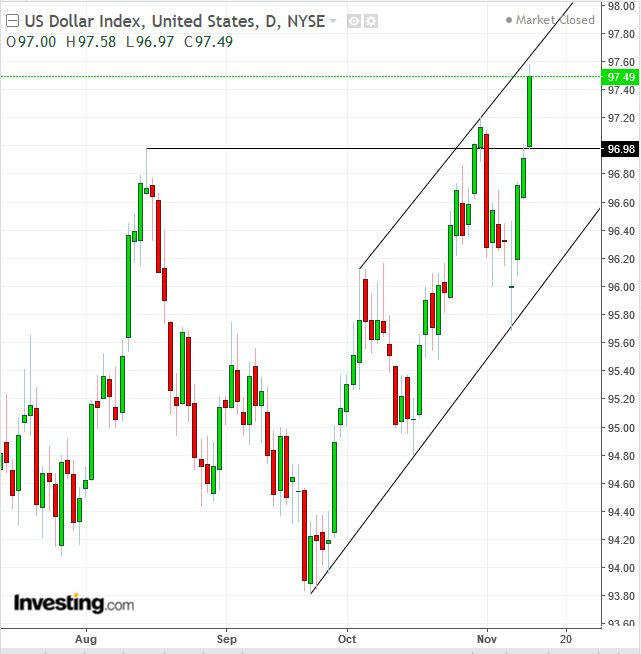 Earlier today, the dollar reaffirmed both its mid-term uptrend—scaling above the October 31, 97.20 peak—as well as its long-term uptrend, registering a higher level than the 96.98-peak of August 15, 2015. Note, however: after it reached the top of its rising channel, or the supply line, earlier today, it backed down from its intraday high.

This retreat may be the beginning of a correction within the mid-term toward the bottom of its rising channel, currently at 96.00 and rising.

Conservative traders would enter a position upon a full mid-term correction to the bottom of the rising channel, followed by confirmation of the trend’s integrity, with at least one long, green candle following a red or small candle of any color.

Moderate traders may enter a long position, upon the uptrend’s confirmation, provided they can stomach a pullback toward the channel bottom.

Aggressive traders may enter a contrarian, short position, hoping to ride the potential correction, with a close stop-loss above. Patient traders may find a bargain upon another rally attempt, further minimizing risk. At that point they would resume using the long position as above, in moderate section.