Chart Of The Day: Trading The Pound’s Wild Brexit Fluctuations

As has happened more than once recently, as well as again earlier today, the was given a boost, on hopes of a Brexit deal. However, when Labour ruled out voting for the deal, the UK currency reversed course.

Nonetheless, after having given up its earlier gains, cable is back to where it was at the top of the session, following a BBC report that Brexit Secretary Dominic Raab gave a thumbs up to reporters when he was leaving a cabinet meeting, suggesting a breakthrough for a Brexit deal. But if you’re a forex trader, is a reporter’s interpretation of the meaning of a hand signal a sound trading strategy? Particularly if there’s been no clarification as to what the gesture was actually communicating?

An earlier newspaper report said Raab and Foreign Secretary Jeremy Hunt planned to utilize the very same meeting to pressure Prime Minister Theresa May into standing up to the EU’s insistence that the so-called backstop proposal be indefinite. In other words, this thumbs up that traders are betting on may signal the very opposite of a trade resolution. Should that be the case we’ll soon hear, yet again, that talks have stalled.

As such, perhaps the only signals which might actually prove beneficial to traders are those that are technical. 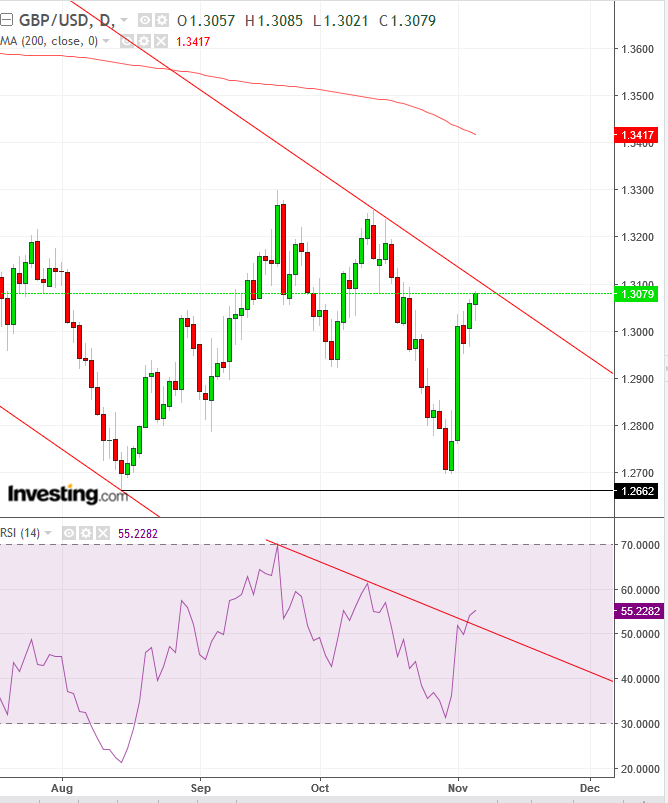 The pound’s struggle under the 1.3100 level confirms the resistance of a line of supply below the falling channel top since April and the 50 and 100 DMAs.

The pound fell after reaching an intraday high of 1.3083, right under the top of a descending channel since April. The RSI is falling, after crossing above its downtrend line since September 20. Should it fall back below the downtrend line, it would demonstrate that the initial rising moment ebbed out.

Conservative traders would enter a short after the downtrend is confirmed with a new low, below 1.2700, especially because the October low found support at the August trough.

Moderate traders would enter a short upon a rally, which would lose steam, as the supply-demand balance falls in line with the long-term trend. That would be represented with at least one long, red candle following a green or small candle of any color.