The jumped this morning—as much as 3 percent against the dollar and the —after the country’s president, Recep Tayyip Erdogan scored a decisive reelection victory in yesterday’s presidential and parliamentary elections. The beleaguered currency, which has lost approximately three quarters of its value against the dollar over the past ten years, is now at its strongest level in two weeks.

But hasn’t it been said before that investors are fed up with Erdogan’s increasingly autocratic governing style? For example, comments by Erdogan advocating lower interest rates, made during the recent campaign, indicated that he would play a more active role in monetary policy going forward. That’s already caused many to sell Turkish assets and invest elsewhere.

Why then would the lira pop on his victory? In the past, Turkish assets have responded positively when the status quo wins, said a recent note from Goldman Sachs. It provides the perception of stability. However, analysts warn that in this case in particular it’s nothing more than a relief rally. As such, it’s likely to be short-lived. 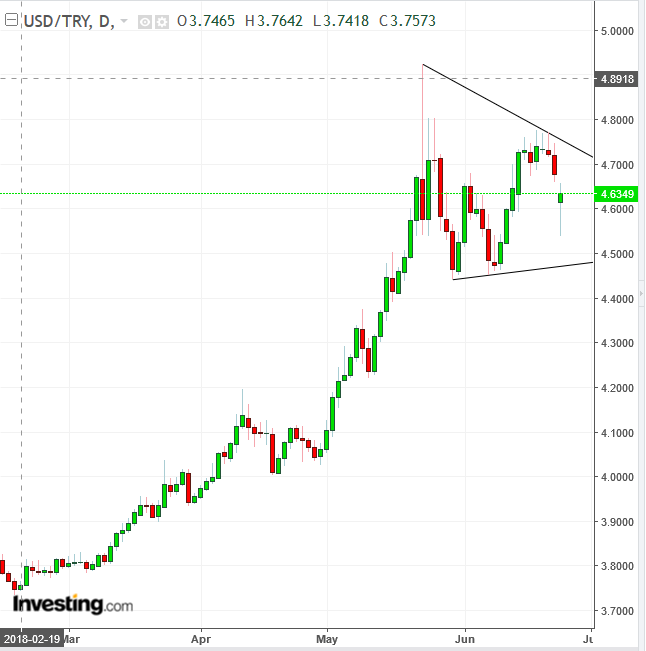 On May 23, the Turkish lira crashed to a new low, losing five percent in value during a single day. The lira’s collapse is in part due to the US Federal Reserve hiking interest rates, which encouraged investors to invest in the US rather than other economies. Erdogan also hurt the lira last week when he indicated presidents should be granted greater power over monetary policy.

Since then, the USDTRY pair has been developing a Symmetrical Triangle, a continuation consolidation, and in an uptrend like this one, a bullish pattern. The prior uptrend had been interrupted by a consolidation, since the extremely high USD/TRY level attracts sellers, who face off with buyers.

The upside breakout occurs after all the available supply has been absorbed and buyers must bid up their offering price to find willing sellers. Buyers have proven much more committed to their cause and are therefore expected to keep bidding up prices.

Conservative traders would wait for a decisive upside breakout, with a 3-percent penetration, as a filter to avoid a bear trap. They would then wait for a return move to prove the pattern’s integrity, with at least one long green candle enveloping the preceding red candle or small candle of any color.

Moderate traders would wait for a 2-percent upside breakout for a moderate filter. They may then wait for a return move, for a better entry price but not necessarily to retest the pattern’s support.

Aggressive traders may be satisfied with a 1-percent upside breakout.