HomenewsCurrency ForecastChart Of The Day: Trading The Yen On The Potential BOJ’s Turn Of Tide

Chart Of The Day: Trading The Yen On The Potential BOJ’s Turn Of Tide

The is facing an important moment this week as the Bank of Japan may cut back on purchases of its bonds to stabilize yields.

Since September 2016, the BOJ has purchased all of the country’s government bonds, keeping their yield below the 0.100 percent level. But speculation that the bank is finally mulling tapering its sizeable quantitative easing programme propelled yields above 0.11 percent on Monday, the highest level since February 2017.

Meanwhile, the yen jumped on July 20 when Reuters first reported the BOJ’s “unusually active discussions,” as investors, allured by the prospect of a higher yield on Japanese bonds, gladly stepped up their exposure to the safe-haven yen. But since then, the price has been consolidating on profit-taking as traders sought more solid evidence that the rumors would translate into facts. What’s the USD/JPY’s next move? 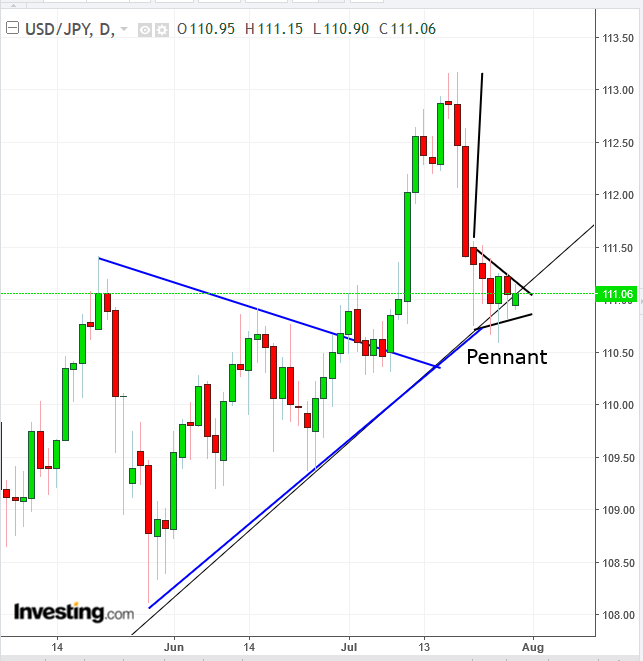 Consider the location of the pennant, right on top of the uptrend line since March 26, as a “red line” for both bulls and bears. It is also above the symmetrical triangle May 21 and June 29, which is bullish in an uptrend. While only about two-thirds of the pattern’s target materialized, that occurred before any signs of a policy change.

Still, technicals are based on market positions, which at times offset fundamentals, at least temporarily. So, traders should be mindful of the presumed symmetrical triangle’s support, both as a target or as a trigger for a short, in case it fails.

A downside breakout — which could take place when and if the BOJ on Tuesday — would signal that the pair drop from above 113.00 that preceded the pennant’s consolidation would repeat, as yen buyers would bid up prices to find willing sellers.

Conservative traders would wait for a second descending peak and trough to complete an official reversal.

Moderate traders might rely on the completion of the bearish pennant after waiting for a likely return move to retest the pattern.

Aggressive traders may enter a short position now, with a close stop-loss to minimize risk.