HomenewsCurrency ForecastChart Of The Day: USD/JPY Set For A Downside Breakout

Chart Of The Day: USD/JPY Set For A Downside Breakout

With many observers expecting the Bank of Japan to make no immediate policy change at the close of its two-day meeting on , despite the U.S.-China trade war and a dovish outlook, prospects are fast increasing for the to strengthen versus the dollar.

To clarify, most economists do expect eventual further easing by the Bank of Japan. However, currency moves based on the fundamentals take time to play out. Case in point, equities have been rising every time the U.S. demonstrated economic weakness, as traders focused on the presumed Fed stimulus.

We recently saw the same pattern in China. While investors should rely on long-term economic developments, traders take advantage of market action in the shorter term. We may be heading for just such an opportunity, as technical analysis of the charts demonstrates. 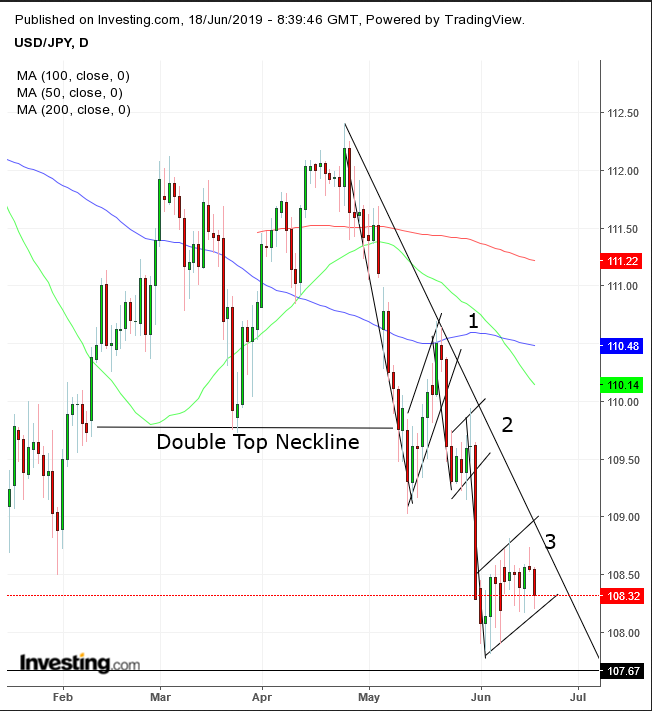 After the dollar-yen completed a double top on May 14, the pair continued in the downtrend with corrections in the shape of rising flags, demonstrating a healthy, sustainable decline, in which sellers evenly and gradually increased supply. When all demand was depleted, sellers lowered their bids to find new, willing buyers, at lower, more attractive prices.

After completing two such patterns, the dollar is trading against the yen according to the same pattern for a third consecutive time. A downside breakout would set up another downturn, as a series of triggered orders would presumably keep snowballing, taking on the yearly lows, and the last near support, potentially turning a snowball into an avalanche.

Conservative traders should wait for the price to breach the $107.50 levels, before considering a short position.

Moderate traders would wait for the flag’s downside breakout followed by a return move that demonstrates sufficient supply to keep pressing prices lower, with at least one long, red candle engulfing a green or small candle of either color.

Aggressive traders may short at will in anticipation of a downside breakout, counting on the medium-term downtrend. Risk-reward ratio would improve if they waited for a correction toward Monday’s highs.