HomenewsCurrency ForecastChart Of The Day: Where Next For The USD? Conflicting Signals Aren’t Clear

Chart Of The Day: Where Next For The USD? Conflicting Signals Aren’t Clear

One of the overarching directives of the Federal Reserve is to manage monetary policy so that the national currency remains stable and economic growth doesn’t become unsustainable. To that end, the Fed has the honor of having been the provider of perhaps the the longest equity bull market on record. One of the primary drivers for the 330 percent gains during the last decade was a near-zero interest rate, which the US central bank engineered in order to drive economic expansion.

Of course, artificially low rates aren’t sustainable either. Which is why, beginning at the end of 2015, the Fed began gradually raising rates, in order to keep the economy on track. Equities have continued their upward trajectory since then, but even the most robust bull markets ultimately burn out. And coupled with a variety of strong macroeconomic and political headwinds, the bull has begun to wobble.

Partially that’s a result of investors having grown pessimistic about the market. There’s a generation of traders who’ve only known an accommodative environment. They’ve come to expect that monetary policy will always be on their side. But rising rates—which are nonetheless still historically low—have suddenly become more threatening. The economic outlook appears to be dimming. President Donald Trump’s recent anti rate hike stance, ahead of tonight’s , has probably added to the jitters fueled by the possibility of higher rates.

As well, rising rates doesn’t necessarily mean a rising , despite the obvious positive interest rate differentials. The fact is that since the December 16, 2015 rate hike, the first since 2006, the dollar is lower. On December 15 the Dollar Index closed at 98.22, a percent-and-half higher than where it is now.

Since the dollar is the global reserve currency, as well as the underlying currency of commodities, and currently a safe haven as well, there are many different forces now at play, driving its overall supply and demand. 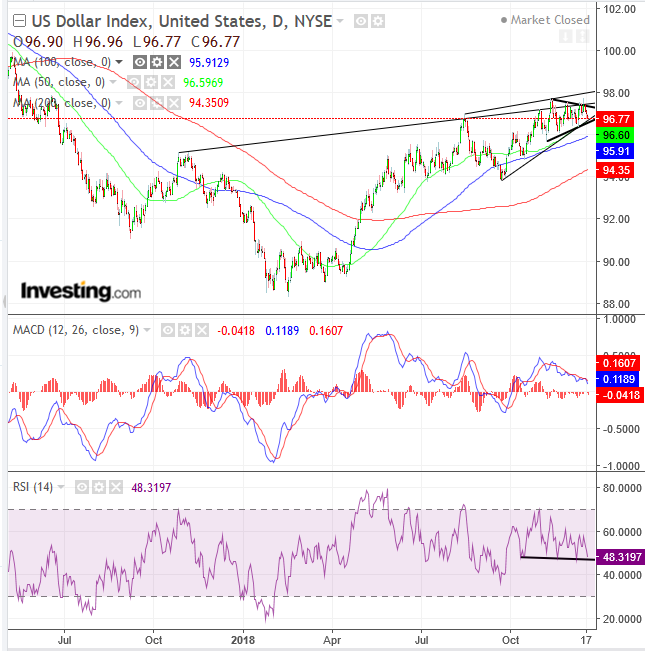 It’s easy to see these conflicting forces within the discordant pattern formations on the DXY technical chart. Trading since November has developed a symmetrical triangle, presumed bullish in an uptrend, completed with an upside breakout.

On the other hand, the price pattern developed since mid-August has been forming a rising wedge, which demonstrates bearish tendencies, as demand grows tired of the price’s lack of progress. On top of all this, the price may be forming a massive bottom since November 2017. Note, the MACD provided a sell signal, as the shorter MA fell below the longer one, and the RSI may be forming a top, complete with a downside breakout.

Bottom line, it’s impossible to know where the dollar is going next. Traders may attempt to trade it within its consolidation or wait for a breakout. Note, even an upside breakout of the symmetrical triangle will leave it within the rising wedge pattern, whose top can still form a resistance.

Conservative traders must wait for a trend resolution, with a decisive breakout, either up or down, of the wedge, before committing to a position.

Moderate traders may risk a position based on the symmetrical triangle’s breakout, again, up or down.

Aggressive traders may enter a long position, counting on the support of the 50DMA, symmetrical triangle bottom and uptrend line since September 21 (which may be part of a rising wedge following an uptrend, not downtrend, as it normally should).