Chart Of The Day: Why This Time The Dollar Will Rise…Despite Trump

Though US President Donald Trump’s second round of recent attacks on the Fed have battered the , technicals signal that the global reserve currency continues to maintain an upward trajectory.

Trump yesterday criticized the Fed for raising rates by saying he was “not thrilled” with the central bank’s hikes, suggesting the Fed is not doing what’s right for the country. He used the same exact phrase to signal his displeasure when he attacked the Fed on July 19.

While the dollar trimmed gains that day, it nevertheless continued to advance. It’s also set to ignore the rhetoric now.

There are four reasons this occurrence is different from the last time Trump slammed the country’s currency, when his remark that the too strong dollar “is killing us,” triggered the dollar’s 12 percent plunge between January 2017 and February 2018: 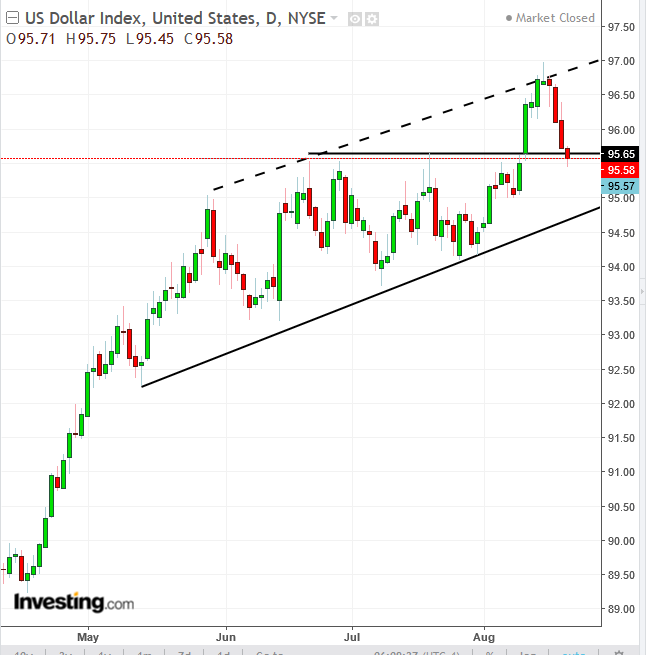 The Dollar Index has been trading within a rising channel since late May. It also created an ascending channel, when bulls sucked up all the supply that had been forming a resistance at the 95.50 level between late June and early August.

As of the time of writing, the price is 95.65, above the top of the ascending channel, confirming its support, after having temporarily dipped below the pattern top. In addition, even if the USD would fall below the top of the triangle, this may still be considered nothing more than a temporary correction with the rising channel, where the 50 DMA stands guard.

Conservative traders would wait for a new high, above the August 15, 96.98 level, to confirm the uptrend.

Moderate traders might wait for a new high or a return to the channel bottom for a safer entry after a full correction. Depending on their risk aversion, they might wait for trend confirmation with a bounce of at least one long, green candle, engulfing a preceding red or small candle of any size.

Aggressive traders may open a long position either upon the closing of a hammer, above 95.65 or they could wait for a long green candle to cover today’s red one.

Exuberant traders may buy even after just one close above the 95.53 pattern top.