A substantial step forward in the US-China trade war was cemented Tuesday morning after China’s Vice Premier Liu He announced a reduction in tariffs on US autos from 40 percent to 15 percent. The change will make American cars considerably more affordable in the world’s largest market but perhaps more importantly, signifies the two nations are willing to negotiate after being locked in a bitter economic stalemate for months. The progress comes amid concerns from many analysts that the arrest of Huawei’s CFO would derail any good will built between the parties and stall talks.

Despite the arrest, negotiations are set to continue between top officials in the coming days. Reports that China will once again purchase US agricultural products, most notably soybeans, have circulated but an official announcement has not yet been made. While Tuesday’s agreement was conducted over the phone Mr. He has announced he will travel to Washington “after the new year” to conduct talks in person. These discussions will likely take place within the 90-day trade truce that expires on March 1st.

Learn to trade around news events and data releases with our Introduction to Forex News Trading guide.

Tuesday’s progress could also spark a shift in sentiment regarding future trade war discussions. Markets may once again view discussion as an upside risk, a factor largely absent in recent weeks after the trade-truce was deemed underwhelming by many and geopolitical risks spurred a risk-off attitude. With that in mind, equity markets still managed to retrace most of their early morning gains. 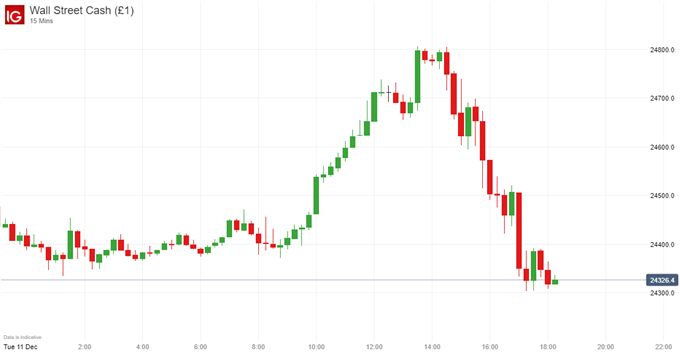 After a robust rally in early hours, the Dow and S&P 500 slowly forfeited their gains to trade near even for the day. Despite the mid-day trade war announcement, reports of the deal circulated earlier in the session which likely contributed to the gap higher and non-reaction when officially announced. 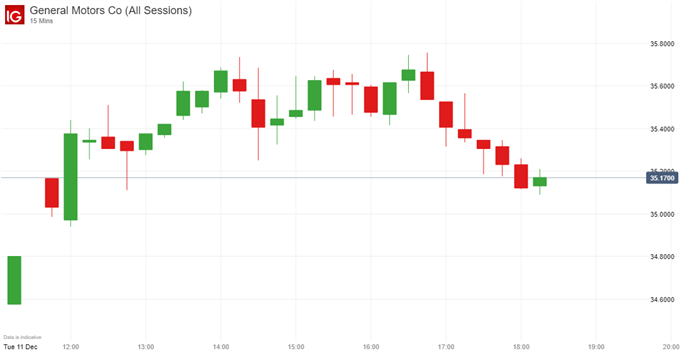 Unsurprisingly, shares of US automakers Ford, General Motors and Chrysler also gapped higher at the open but managed to hold onto most of their gains even as the trading session progressed.

Markets will now look to the verdict on Chinese purchases of US agricultural products to drive trade-war progress and sentiment. While those discussions may still be a work in progress, Tuesday’s announcement is a victory for US automakers and broader equity sentiment.