China has started calling Donald Trump’s bluff on trade threats, but the measured response by the commodity markets concerned shows that investors are playing it sensibly instead of swallowing the theatrics on both sides.

After weeks of claiming how unhappy he was with China for having gutted the U.S. with COVID-19—to outright threatening at times to walk away from the much-vaunted Phase One trade agreement between the two countries—Trump ended his show on Friday by slapping Beijing on the wrist instead over Hong Kong. Stocks on Wall Street surged in a , as did on NYMEX. 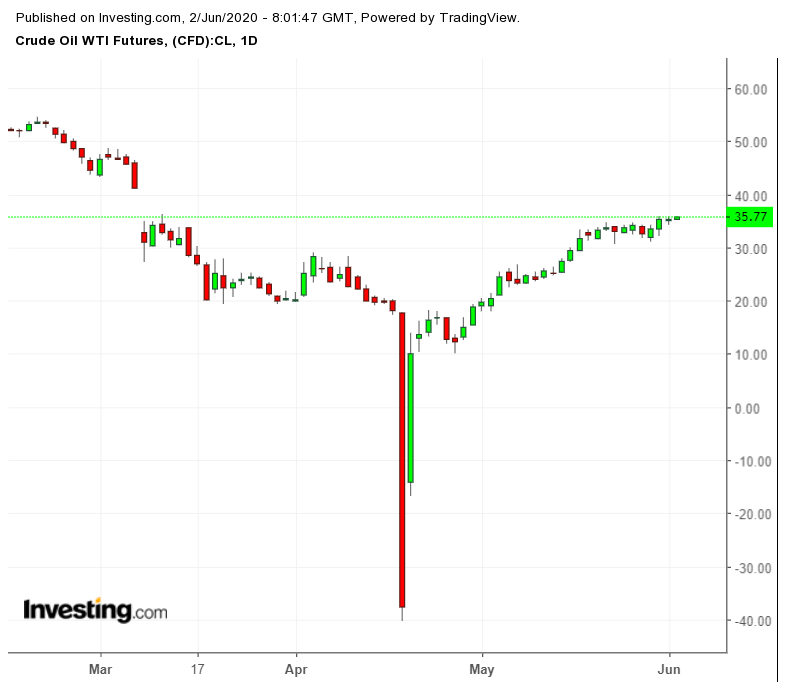 But China wasn’t done with him. Beijing told state-owned firms over the weekend to from the United States, Reuters cited two people familiar with the matter as saying.

Chinese importers have canceled 10,000 to 20,000 tonnes of U.S. pork shipments—equivalent to roughly one week’s orders in recent months—following Trump’s comments on Friday, one source said.

China is ready to halt imports of more agricultural products from the United States if Washington takes more action on Hong Kong, the sources said.

Large volume state purchases of U.S. corn and cotton were also put on hold, one of the sources said, in response to Trump’s threat on Friday to eliminate special treatment for Hong Kong to punish Beijing.

China has bought soybeans, corn, wheat and soyoil from the United States this year, to fulfill its commitment under the trade deal. Beijing also stepped up purchases of U.S. pork, after the deadly African swine fever decimated its pig herd.

The U.S. Department of Agriculture reported that China bought $1.028 billion worth of soybeans and $691 million of pork in the first quarter of 2020.

China pledged to buy an additional $32 billion worth of U.S. agriculture products over two years above a baseline based on 2017 figures, under the initial trade deal the two countries signed in January.

If Trump Continues To Target China, It Won’t Buy

In a worst-case scenario, if Trump continues to target China, Beijing will have to scrap the Phase One trade deal, a second source familiar with the government plan said.

“There’s no way Beijing can buy goods from the U.S. when receiving constant attacks from Trump,” the person explained.

The news did little to ruffle markets in Monday’s trade.

“Should we prepare for another sequel?  I have lost count at this point as to which this may be … three, six, maybe eight, they all have begun to blur together by now,” Dan Hueber of the St. Charles, Illinois-based Hueber Report, wrote, referring to Trump’s multiple pledges to respond with tough sanctions if China followed through with heavy-handed actions on Hong Kong.

“China has already commented that if these are severe, they will retaliate by reducing purchases from the United States and have already instructed the state-owned grain companies, Cofco and Sinograin to suspend purchases of U.S. farm goods.”

“Of course, no one defined what ‘severe’ might mean, so we shall have to wait to see how this unfolds in the days ahead.”

Jeffrey Halley, senior markets analyst at OANDA in New York, has about the same thesis.

But That China Threat Is Only A Blip, Say Some

China’s instruction to state-owned produce buyers to halt purchases of U.S. soybean and pork caused only a blip in markets overnight because “private companies were not issued the same orders,”

“And the exercise, along with the PBOC fixes recently, appears to be more a shot across the bows of the U.S. over Hong Kong, and not an imminent threat of withdrawal from the U.S.-China trade agreement. That, off course, would help precisely no-one in these difficult times.” 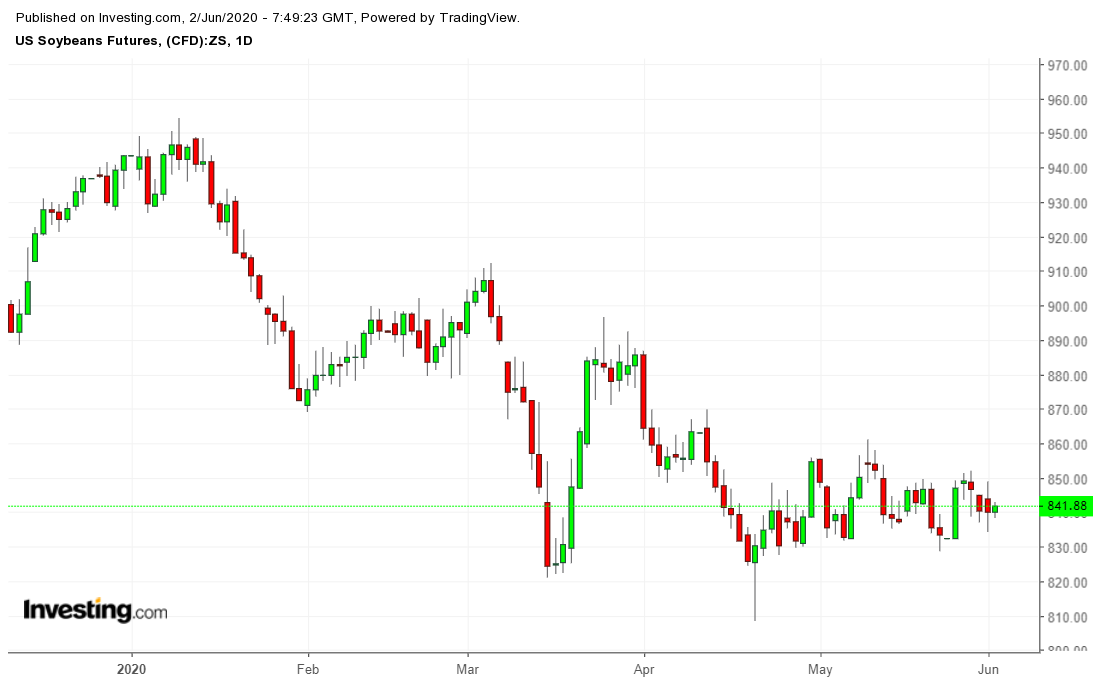 on the Chicago Board of Trade dipped less than 0.5% Monday, extending May’s 1.8% decline, April’s 3.4% trough and March’s 0.9% slide—all from disruptions caused by the pandemic.

By Tuesday’s morning trade in Asia, however, soy futures rose just enough to return to the green lane.

“China has remained a very active buyer in South America even as it has increased soybeans buying here in the U.S., so the overall amount taken from the U.S. might not match the hopes of the trade,” Jack Scoville, vice president for agriculture at the Price Futures Group in Chicago, wrote in his Monday note.

Scoville is among those not buying the China-will-abandon-U.S.-soy story, saying:

Technically as well, U.S. soy may have some more upside left. Hovering at $8.4238 per bushel on Tuesday, Investing.com’s Daily Technical Outlook tagged July CBOT soybeans as “Neutral.”  But with a top-end resistance of $8.6272, it still leaves the contract with room for a 20-cents, or 2.4%, upside.

CBOT , which act as a gauge of Chinese pork purchases, fell 4% on Monday, as trading for June began 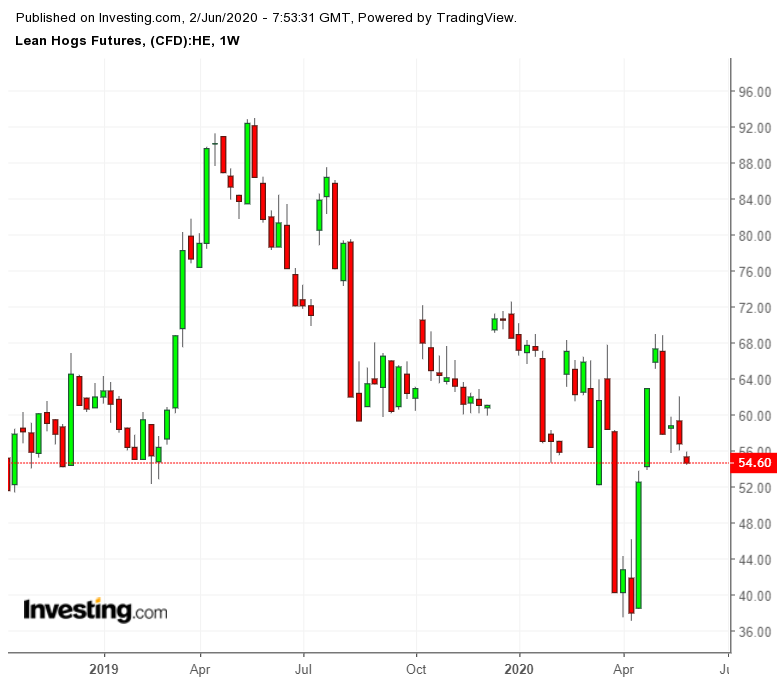 That extended the near 4% decline for U.S. hogs in May accrued on the back of worries about meat plant closures due to COVID-19 outbreaks. CBOT hog futures had, in fact, crawled out of a major hole just a month earlier, rebounding by 13% in April, after a 16% drop in March due to pandemic.

At Monday’s price of 55.30 cents per lb, CBOT lean hogs were labeled a “Strong Sell” by Investing.com. Yet, with a max upside forecast of 58.22 for the benchmark July contract, the market still has the potential for a 5% gain near-term.

Even if lean hogs were to fall over the next couple of months, it might have more to do with shifting U.S. demand and , rather than China, said Price Futures Group’s Scoville.

“The backlog of cattle and hogs will slowly disappear under this scenario and meats wholesale and retail prices will fall,” Scoville said. “This will take some time, but it is starting to come to pass.”