WTI bulls are barreling for . So are shale drillers—and that could be a problem for what has been a stupendous rally in crude so far. 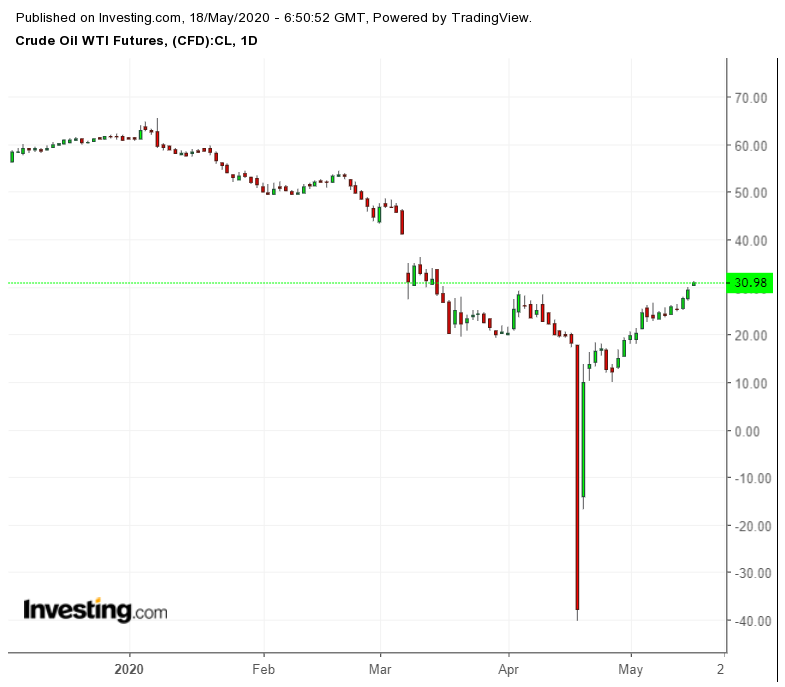 Much of the credit goes to the pain taken by drillers in the oil basins from Oklahoma to North Dakota and Texas, who shut in wells and dismantled rigs by the hundreds, instead of sitting around for bankruptcy to happen from the COVID-19-triggered demand destruction.

The Energy Information Administration estimated U.S. crude production last week to be 1.5 million barrels lower from the mid-March record high of 13.5 million barrels per day. Just a month ago, everyone was fretting that storage tanks across the United States will run out of space soon from all the unwanted oil the country was producing amid the pandemic. The EIA hasn’t just taken away some of those fears with its revised production estimates. More than that, its data on Cushing shows us that tanks at the Oklahoma hub that store physical oil delivered against expiring WTI contracts aren’t ready to blow their lids yet.

That’s not all. There’s hardly any economics for storing oil now, with the contango, or discount, in June WTI versus July virtually vanishing as trading began in Asia Monday. At most times this year, the front-month traded at a discount of between $5 and $10 to the closest nearby month, and until Friday’s close, the gap was still at more than $3. But of course, nothing compares to the mind-numbing $20+ super contango seen last month when U.S. crude crashed into sub-zero territory for the first time in history, rewarding oil bears with the la-la land that had only been in their dreams till then.

But with the bulls seizing back control of the market now, and WTI barrelling past $30, a different kind of economics—and —seem to be shaping up for drillers.

According to McCrea, about 8% of oil volumes that fed Energy Transfer’s pipe network in the Midland were shut at the start of May. By last week, 25% of that was back.

And there’s more. Two prominent shale producers, Diamondback Energy (NASDAQ:) and Parsley Energy (NYSE:), said last week that all they needed was oil at around $30 a barrel to consider easing up on output cuts and start fracking new wells.

Diamondback initially pledged to pare this month’s output by 10% to 15% and send home most of its fracking crews for the whole quarter. The Midland, Texas-based company said it expected to end the year with more than 150 wells that were drilled but never fracked as U.S. producers avoided pumping oil into a vastly oversupplied market. Parsley Energy, meanwhile, had earlier curtailed a quarter of its output and temporarily abandoned its five-rig, two-frack crew program.

Now, the abandonment of their goals could undermine President Donald Trump’s pledge that the United States will have Saudi Arabia and Russia’s back in ensuring at least 9.7 millions per day are taken off the global market from May 1. Trump had indicated that the U.S. contribution to that deal would be about 2 million bpd.

Dominick Chirichella, director of risk and trading at the Energy Management Institute in New York, said the same drillers behind this month’s rally might be threatening oil’s longer-term recovery if prices continued to rise at the pace of the past two weeks.

“Investors will be closely monitoring the trajectory of domestic output, with some analysts suggesting shale operators may quickly bring back production if prices rise to higher levels,” Chirichella said in a note at the weekend.

It’s important that shale operators refrain from doing exactly what analysts fear because the market is still way off from being balanced from a supply-demand perspective.

While has been impressive for the last two weeks, is still anemic. Even with all of America’s 50 states reopened for business in one way or another, people continue working remotely, causing buses and trains to run on lighter schedules that require far less diesel consumption than four months ago.

Any idea that the imbalance in U.S. crude is getting worse will only push , exposing the front-month contract to hazard toward expiry. For now, it’s almost certain that we’ve avoided a horror sequel to the events that occurred at the expiry of WTI’s May contract. Yet, if production starts climbing before the market is structurally sound, this rally could fizzle in no time.

“A big question is whether U.S. shale producers could spoil the party by restarting shut-in production or completing wells the moment that prices rise high to earn any positive cash flow,” Dan Eberhart, CEO of Canary, wrote in a Forbes opinion piece last week.

Bloomberg oil analyst Julian Lee sounded a similar concern. “There’s a double risk on the horizon: Just as lifting lockdowns too soon could bring a second spike in virus infections and deaths, loosening the hard-fought restraint in oil production too soon risks a second oil-price collapse,” Lee said in a recent commentary:

A key point to remember, said Chirichella, is that even with a drop of 425 oil rigs over the past two months, U.S. crude production remains higher than it was five years ago. In his weekend note he said:

On the precious metals front, too, with the which tracks live trades in bullion, hitting 7-½ year highs Friday to finally shatter the $1,750 ceiling. 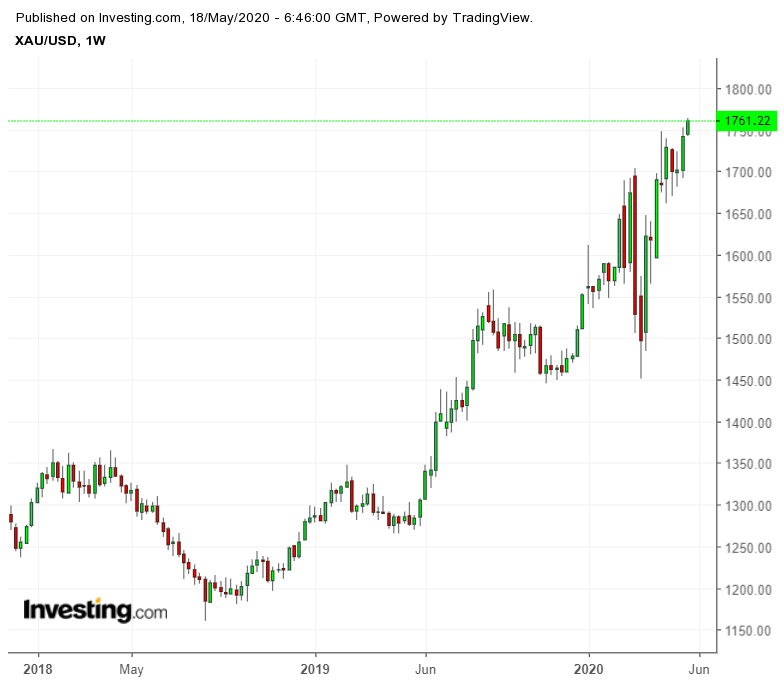 With the combined forces of the U.S. Federal Reserve, Treasury and lawmakers approving and disbursing trillions of dollars of stimulus to aid the recovery of the world’s largest economy from COVID-19, look poised to test the $1,780 resistance next on its way to the $1,800 mark.

“Along with escalating tensions between the U.S. and China, (these) should continue to support higher gold prices.”