HomenewsAnalysisCommodities Week Ahead: Huge Risk On Both Sides Of Oil Rally; Early Boost For Gold

Commodities Week Ahead: Huge Risk On Both Sides Of Oil Rally; Early Boost For Gold

If you’re rushing to add to oil’s geopolitical premium in the aftermath of Saturday’s attacks on key Saudi oil facilities, there are three things you need to watch: Saudi Aramco’s update on repairs, potential reprisals against Iran and U.S. President Donald Trump’s tweets on all this. 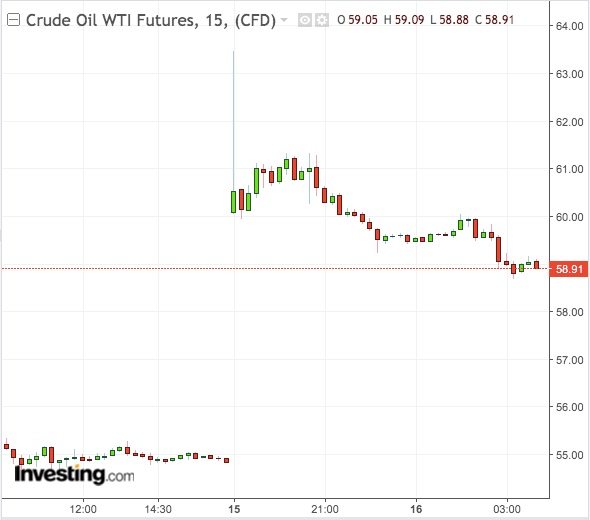 jumped more than $8, or 15%, in the first hours of trading in Asia on Monday, after Iran-backed Yemenite Houthi rebels claimed Saturday’s drone attacks, which disrupted about half of Saudi’s daily oil output and 5% of world supply. Global benchmark surged over $11, or 19%, at the session highs, surpassing the $10 per barrel gain forecast by some analysts.

Only Trump’s announcement that he had ordered the release of emergency crude supplies from the U.S. Strategic Petroleum Reserve (SPR) managed to tamp down the rally. It is not known how much of SPR crude will be needed to cover the losses.

The Aramco-owned Abqaiq processing complex and Khurais oil field account for nearly 6 million barrels per day. The Wall Street Journal quoted unidentified Saudi officials as saying that they expect to have a third of output, or 2 million barrels per day, restored by Monday and to rebalance supply in the coming days. But Reuters cited other Saudi insiders as saying that return to full oil capacity could take “weeks, not days.”

Hype To Rule Oil In The Short Term

In simple market terms, the path of least resistance for oil now is higher. In reality, hype will likely rule over fact in the short term, as more traders join the bull herd.

There are, however, enough countervailing issues to make one wonder if any call made on oil over the next few days will be fundamentally sound.

In terms of an attack, this is Saudi Arabia’s 9/11 for oil, although not a single life was reported lost. In one strike, the Houthis have not only humiliated the might of he desert Kingdom—a payback for all done to them in the Yemen war—but also left Riyadh sleepless over the security of its refineries and oilfields hereon.

The Saudis’ ability to thwart future attacks of this kind is already being questioned. Only a retaliation that is commensurate—either aimed at the Houthis themselves or their Iranian backers—might seem adequate to the Kingdom’s strong-willed Crown Prince Mohammad bin Salman, often referred to by his initials MbS.

Writing in the Financial Times, Nick Butler, chair of The Policy Institute at London’s King’s College, noted there was sufficient spare capacity within OPEC and internationally to cover even an extended closure of the damaged Saudi facilities.

But that’s not the worry, wrote Butler, adding:

“The bigger risk facing the market, however, is some form of Saudi retaliation against Iran … reinforced by the unstable nature of the Saudi regime under the crown prince. If retaliation becomes a reality, any spike could be sustained, feeding the risk of an economic recession.”

Needless to say, a global recession—or even fears of one—would hit demand for crude, offsetting any oil rally.

Notwithstanding the affront to their dignity from the attacks, the Saudis are likely to welcome any boost to oil prices that could help the Aramco IPO, expected to be the world’s largest. Aramco is planning a 5% sale of its shares and a valuation of up to $2 trillion of its energy business, which pundits initially doubted given the limited transparency that investors will get from the company. The geopolitical risks ramping up in oil could now narrow that valuation gap.

So, while the attacks on their own might be politically disastrous for the Saudis, they might have, strangely, helped the Kingdom in another way.

Further on conflicts, there are more serious ones at the White House, involving Iranian policy.

On one hand, the Trump administration said it intends to inflict “maximum pain” on Iran, to supposedly stop it from developing nuclear weapons. On the other, the U.S. president is quietly considering removing sanctions on the Islamic Republic’s oil. Trump’s sacking of his national security advisor John Bolton last week is believed to be the first step toward making a deal that will eventually let tens of millions of barrels of oil from Tehran flow freely back into the market.

The moral victory of making Iran “nuclear-free”—a legacy of the Obama administration that Trump intends to make his own now—will be a plum prize for the White House incumbent as he heads for reelection in November 2020.

The Saudis, of course, are painfully aware of all this, even as relations between them and the White House are said to be at their best in years. This is perhaps why MbS told Trump in a telephone call on Sunday that Riyadh was “willing and able” to respond to the attacks on its sovereignty. Uncoded, it meant: If you’re not going to take care of Iran, we will.

Early media analyses of the Saudi attacks have virtually written off any chance of U.S.-Iran talks and sanctions relief for Tehran. Some of that speculation hinges, of course, on Secretary of State Mike Pompeo’s outright blaming of the Islamic Republic for Saturday’s strikes. Iranian officials have dismissed Pompeo’s accusations—made in a tweet—as “pointless” and implied they were even ready for a “full-fledged” war with the United States.

But it’s Trump, not Pompeo, who will decide what happens to the sanctions on Iran. Interestingly, the president’s first tweet related to the attacks came more than 24 hours after the drone raids, and only contained news about the SPR crude release. In a subsequent tweet though, Trump said “there is reason to believe we know the culprit” behind the attacks and warned that the U.S. was “locked and loaded” for a response. Again, he did not name Iran.

Away from oil, was up more than 1% in Asian trading, riding the coattails of the crude rally. The big story in gold is still the and quantitative easing announced by the European Central Bank on Thursday, and what that means for the Federal Reserve’s own when it meets on Sept 17-18.