President Joseph Biden’s $1.9 trillion pandemic relief is likely to set markets, including commodities, on a mixed course this week as the tug-of-war between economic recovery and inflation risks continues on Wall Street.

After its much-awaited and contentious passage through the Senate, Biden’s bill faces another round of clearance at the House of Representatives on amendments related to minimum wage before he signs it into law. From there, disbursements begin for state COVID-19 vaccinations and aid, help for small businesses, school reopenings and—perhaps most visibly of all—$1,400 checks for most Americans.

For the energy, metals and agricultural markets, the remaining legislative processes in the bill could range from being a bore to highly charged, depending on the backdrop of the daily macroeconomic data. There’s to note after the strong beat by February .

But attention will particularly be on Wednesday’s and Friday’s and .

The focus on price pressures turns this into somewhat of an “Inflation Week,” most appropriate for Biden’s bill itself, which, while promising a powerful boost to the economic recovery and the stock market, has seen optimism offset by fears over rising inflation and interest rates.

Both bonds yields, benchmarked by the US Treasury note, and the rose again on Monday to near last week’s highest, laying a cautious path forth for commodity investors.

Investors have taken the recent yields—which has propelled the 10-year note to levels not seen since before the pandemic—as a sign of potentially damaging inflation expectations.

US Treasury Secretary Janet Yellen, however, indicated Friday that higher long-term Treasury yields were a sign of expectations for a stronger recovery, not of increased inflation concerns.

However, commodities could move up and down for other reasons.

Oil prices, for instance, spiked again in Monday’s Asian session after an attempted drone attack on a giant Saudi Arabia oil refinery and transport hub in the kingdom by Iran-sympathizing Yemeni Houthis. No damage was caused. Yet, oil bulls saw an excuse to drive to above $70 per barrel the first time since January 2020 and just a couple of cents beneath $68. 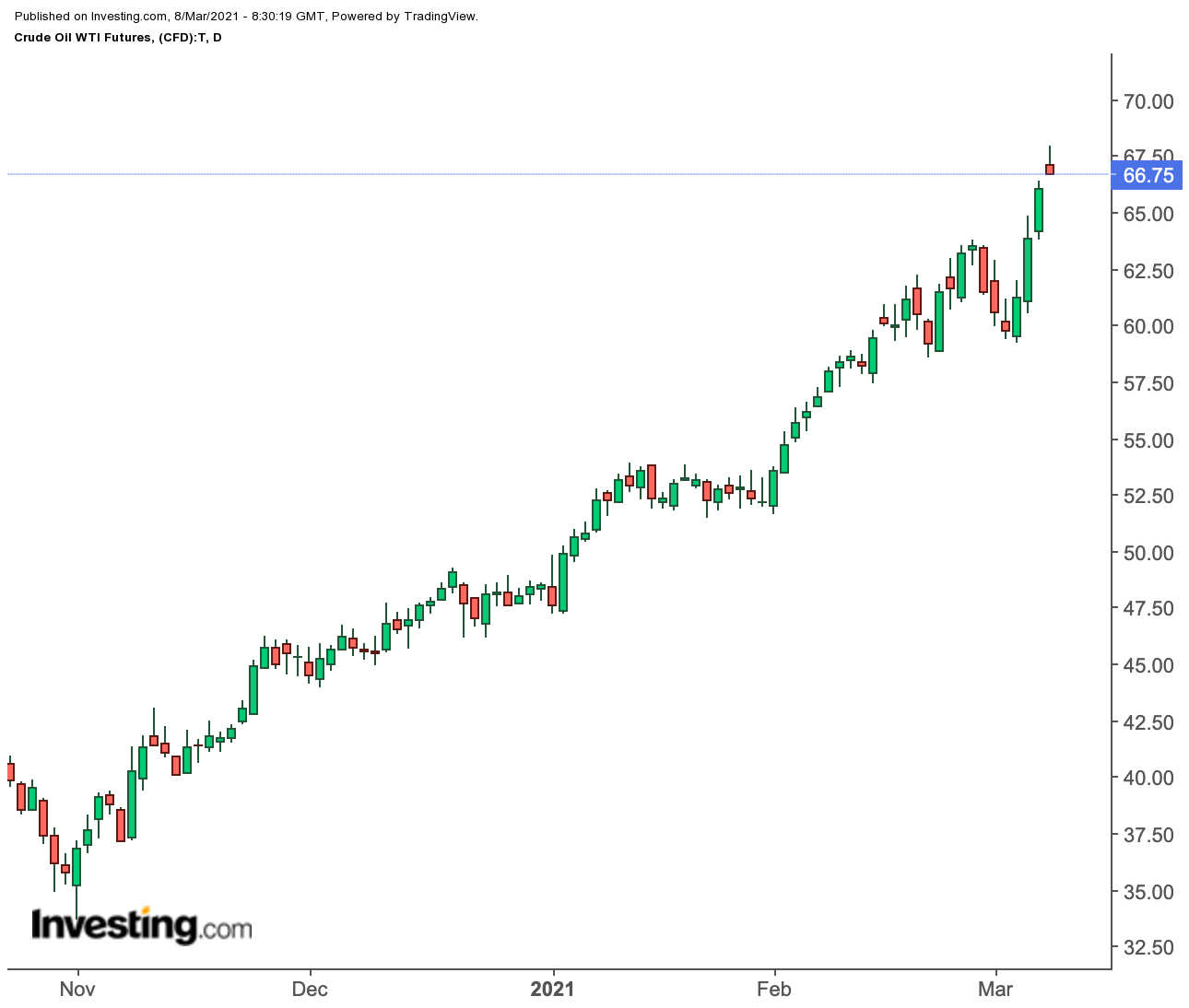 This isn’t the first raid on a Saudi oil facility since the massive September 2019 hit on the Abqaiq complex that impacted the kingdom’s production for weeks.

Each attack since has been blunted with increasing efficiency by the Saudi authorities, providing little justification for related price-hikes. The latest gains in oil should be reversed too. Yet, in an environment where the rally in crude is getting beyond ridiculous—up 85% since end-October, with even the Saudi oil minister now having doubts about demand—one has to wonder when common sense would return.

Jeffrey Halley, senior markets strategist at OANDA in New York, suggests that $70 Brent is as much a function of market psychology as supply, adding:

“Brent crude has a definite gap on its chart, suggesting it could retreat to $69.75 a barrel; it’s Friday high. Support then follows at $67.50 a barrel. The rise through $70.00 a barrel appears to be flushing out physical buyers who were waiting for the dip.”

In gold’s case, the inexplicable departure from the path of inflation continued as COMEX for April delivery dipped into negative territory again at the time of writing after an unmeaningful 0.6% rally earlier in the Asian session. 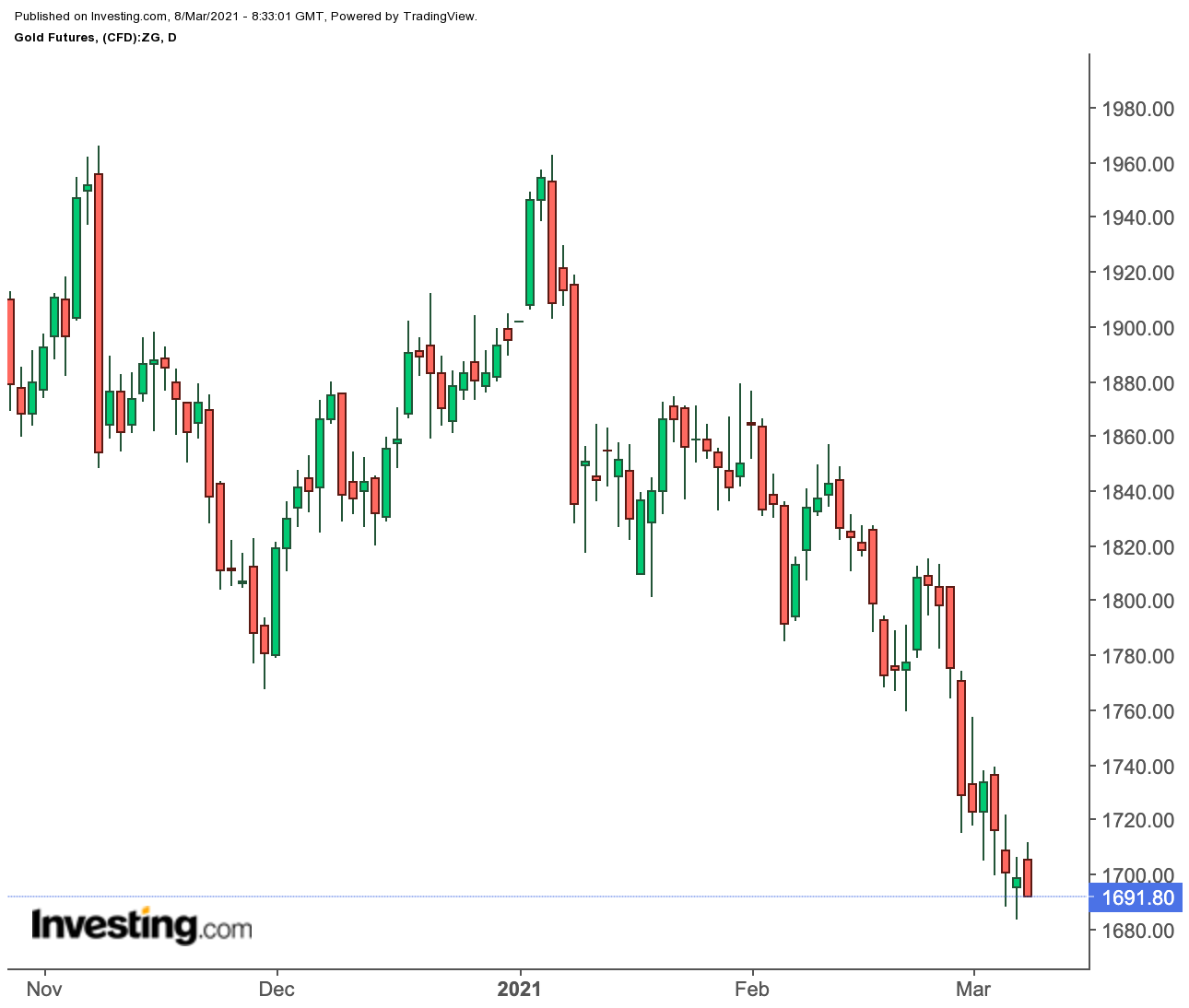 The of gold, which fund managers sometimes use more than futures to gauge direction, remained in the positive, although just marginally.

Already on a slow-burn meltdown, gold got swept up again in last week’s equity market rout despite its so-called standing as an inflation hedge.

Biden’s pandemic relief bill, which should hand the United States a larger budget deficit and higher debt-to-GDP—both good for gold—has been ignored as the yellow metal tumbled recently on the same phenomenon that has routed stocks: surging bond yields and the dollar.

“Gold has been undercut by cheerful economic optimism over a robust economic recovery and faster than anticipated rises in bond yields.”

However, “the (gold) market may have fallen too steeply, too quickly”, Innes added.

Disclaimer: Barani Krishnan uses a range of views outside his own to bring diversity to his analysis of any market. For neutrality, he presents contrarian views and market variables. He does not hold a position in the commodities and securities he writes about.