Consumers in the United States were marginally more confident in February than in January the University of Michigan found Friday, as the overall index ticked higher from 91.2 to 95.5. The increase is an important development to stave off a consistent downtrend in the sentiment indicator. Despite the increase, the aggregate index remains in pressured territory, considerably lower than many recent months.

Other measures of the monthly report also reached noteworthy levels. Richard Curtin, the survey’s curator, noted a few such readings. “Although the majority of consumers expected some additional rate hikes during the year ahead, that proportion has shrunk to the smallest level in the past two years,” Mr. Curtin said. Further, he highlighted the change in inflation-adjusted income expectations which consumers saw to be the highest in the last fifteen years. The reading in adjusted income was largely impacted by longer-term inflation expectations which dropped to the lowest measured level in the last half century.

While many aspects of the survey would rebound, the report still highlighted a lingering impact from the partial government shutdown as federal employees are less optimistic about the economy given their delayed income. Such concerns are difficult to shake off in a single month and the report found the shutdown to have “a slight depressing impact on confidence.” 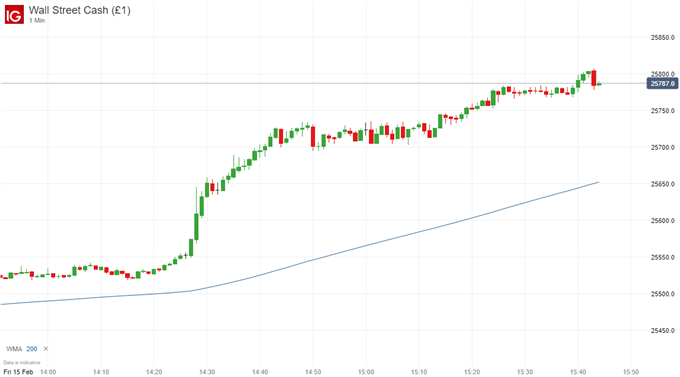 The report had no palpable impact on equity markets as trade war talks look to dominate price action. President Trump heralded considerable progress on the US-China trade war front and that may spur stock markets higher in Friday’s session.

View A Brief History of Trade Wars with our Interactive Infographic