HomenewsMarket OverviewCopper Stuck At New Lows With Some Predicting A Rebound

Copper Stuck At New Lows With Some Predicting A Rebound

Is , which is languishing at year lows, likely to begin bouncing back?

That really depends on whom you ask, though some strategists are predicting the No. 1 industrial metal might finally start moving up.

The different views are largely due to copper’s key role in the economy and the way it trades.

Also known as the “red metal” due to its color, copper is used in almost everything from home building to manufacturing, electronic circuitry, telecommunications, power generation and transmission, making it one of the most reliable measures of economic health. Higher demand and prices for copper suggest stronger industrial activity and growth, and vice versa.

The metal’s “ability” to foretell economic direction has earned it the monicker “Dr. Copper”, making it the only commodity other than oil with such a close nexus to the economy. But Dr. Copper can also be deceiving. For instance, the metal’s prices could rise in a slowing economy due to temporary short supply. Conversely, copper futures could be depressed in the event of a stockpile glut, even when there’s rip-roaring construction and other activity.

The messaging from copper gets particularly muddled amid forex market swings. This is largely due to the and its position during those gyrations. Being the default currency that most commodities trade on, a stronger dollar typically raises the cost of raw materials, making them less attractive to buyers and ultimately weakening their demand and price. The opposite is also true when the dollar is down. To copper’s detriment, however, the dollar has been rallying since February, hitting one-year highs on Thursday against a currency basket, after comments by Federal Reserve Chairman Jerome Powell that cemented expectations for .

Add to that tariffs linked to the current US-China trade war, and the picture couldn’t get murkier. After touching their highest since 2014 in June, copper futures hit one-year lows last week, hovering there since, as the Trump Administration moved ahead to impose tariffs on a further $200 billion of imports from China, including on products such as air conditioners and refrigerators that use copper. 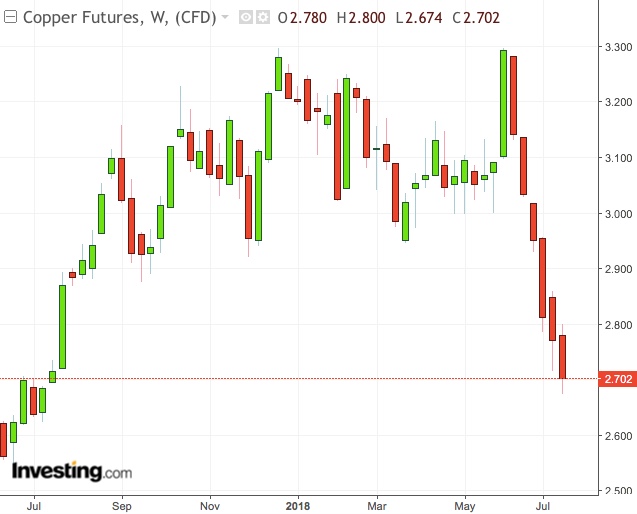 R.J.O’ Brien said it expected copper to continue ailing from the burden of U.S. tariffs on China, the world’s largest consumer of almost all metals.

“Suggestions that tariffs could become a long-term strategy without some Chinese ‘give’ leaves the liquidation watch in copper in place,” the futures broker said in a note on Thursday, adding that Beijing’s vehement denial that it was responsible for the impasse made it appear “as if trade relations are worsening instead of improving”.

While copper might have found some temporary value with its recent consolidation pattern from one-year lows, failure to hold at above $2.7170 a pound on the New York Mercantile Exchange’s COMEX division probably means “yet another sharp range down extension”, said a R.J. O’Brien note from a day earlier.

Technicals aside, R.J. O’Brien cited a potential fundamental reason for the base metal’s weakness: A near 12% jump year-on-year in refined Chinese copper production for June.

Citigroup, however, is convinced the current lows mean copper prices could surprise to the upside, with the question being ‘when’ that would happen, rather than ‘if’. But the Wall Street firm added that in the event of a full-blown trade war, copper would fall “materially lower before it goes higher again”.

“Prepare for a decade of Dr. Copper on steroids,” Citi analysts, including Max Layton and Tracy Liao, wrote in a July 17 note, citing a long-term buying opportunity for the metal from current depressed prices.

“We look beyond the potential trade war to longer-term copper market fundamentals and we find that current prices of $6,200 a ton are nowhere near high enough to enable the market to clear,” added the Citi note, which also raised its 2023 forecast to $7,500 a ton from $7,000. “Copper is set to outperform most other commodities under our coverage over the coming decade on a lack of mine supply growth.”

“The overall lull we’re seeing in project development will start to weigh on the market and we’ll start to see supply fall well behind what are relatively conservative demand forecasts,” Daniel Hynes, senior commodity strategist at Australia & New Zealand Banking Group Ltd. said in a Bloomberg TV interview. “I’m still quite positive on copper in the longer term, but even in the shorter term we’re starting to see some value and concerns around the trade war are overdone.”