HomenewsAnalysisCorn, Soybeans, Wheat: Grains And The Season Of Agriculture Uncertainty

Corn, Soybeans, Wheat: Grains And The Season Of Agriculture Uncertainty

The United States is the global leader in the production and export of and to the world. The U.S.’s agricultural sector is also a significant producer of , the primary ingredient in bread.

Agricultural commodities are the staples that feed populations around the globe. At the end of April 2020, there were approximately 7.65 billion mouths to feed in the world, according to the U.S. Census Bureau. Each year, the number of people on our planet grows by around eighty million. Therefore, the demand side of the equation for food is always expanding.

The crop year in the northern hemisphere begins with planting in the spring. During the summer months crops grow, leading to the fall harvest. When it comes to the prices of corn, soybeans, and wheat futures, it’s weather conditions across the critical growing areas in the United States and other producing nations around the world that determine the size of annual crops.

As we are now in the heart of the spring season, uncertainty about the weather over the coming months typically causes increased price volatility in the grain futures markets at this time of the year. But 2020 is hardly an ordinary year in markets across all asset classes because of the global pandemic, and agricultural products are no exception.

Each year is a new adventure

The agricultural products that feed the world do not have the same shelf life as other commodities like , , and many others. While grains and other agricultural products can sit in silos and terminals when production is higher than consumption, they deteriorate over time. Therefore, each crop year is a new adventure as the growing population requires more fresh food products each year. Bumper crops have become an addiction for a hungry world.

The last time grain shortages developed was in 2012 when drought conditions sent the prices of corn and soybeans to all-time highs and wheat to its highest price since 2008 when it reached a record level. Mother Nature determines the weather each year, which is the leading factor when it comes to the path of least resistance of prices.

The global deflationary spiral has sent the prices of grains to low levels as the planting season in the U.S. will lead to the all-important growing season in May and the summer months. The potential for drought conditions can cause price spikes in the grains during the growing season as futures prices become as fickle as the weather.

The monthly chart of nearby corn futures on the CBOT shows that at the $3.11 level at the end of last week, the price was near the lowest level in a decade. The last time that corn traded below $3 per bushel was in 2009. Corn traded to a record high of $8.4375 in 2012.

The monthly chart of CBOT soybean futures illustrates that the price of the oilseed at $8.4625 is a lot closer to the low over the past ten years than the high. The beans reached a peak of $17.9475 in 2012 during the last significant drought in the U.S.

Wheat production is ubiquitous when it comes to consumption, and 2008 was a year where drought conditions around the globe caused shortages of the grain, the primary ingredient in bread. Bread is a staple for people around the world, and feeding people is an essential requirement for governments. Throughout history, many examples of civil uprisings were the result of wheat shortages or rising prices. The most recent example was the Arab Spring in 2010, which started as bread riots in Tunisia and Egypt after wheat shortages from the 2008 crop.

As we head into the 2020 crop year, prices are at low levels, and the markets are assuming that there will be another bumper crop. If Mother Nature does not cooperate, watch out. Should that happen, prices for all of the leading grains could suddenly soar.

The energy market with crude oil trading to its lowest level in history as the nearby NYMEX futures contract fell into negative territory before expiring. In the U.S., the mandate requires a blend of the biofuel with . Corn is the primary ingredient in U.S. ethanol. 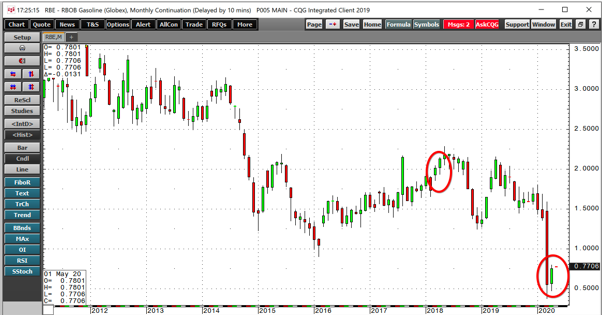 The monthly chart shows that at the end of April, the price of gasoline was at 75 cents per gallon compared to over $2.00 at the same time in 2019. Since approximately 30% of the annual U.S. corn crop goes into ethanol production, the weakness in gasoline and oil prices was weighing on the price of the coarse grain as it heads into the season of uncertainty.

When it comes to soybeans, processors crush the oilseed into two products, soybean meal, and oil. The meal is the primary ingredient in animal feeds. Cattle and hogs consume soybean meal that fattens the animals before they head to processing plants.

The monthly chart of shows that the price of pork fell to its lowest level since 2002 in April.

Live cattle fell to the lowest price since 2009. The low prices for meats are leading ranchers to euthanize animals rather than feed them, as processing plants have slowed production because of outbreaks of coronavirus.

Low energy and meat prices create unique problems for grain prices during the current deflationary spiral. Meanwhile, over 7.6 billion people in the world depend on agricultural products for nutrition. Since the weather will determine supplies, we are now at the time of the year, where uncertainty peaks as the growing season begins.

Adding to that uncertainty is the potential for between the U.S. and China on the trade front. While the two countries signed a phase one trade deal in mid-January, COVID-19 could change the dynamic. The U.S. and other nations blame Chinese leadership for a lack of information that could have controlled the spread of the virus and prevented the pandemic.

Since China has consumed one-quarter of the U.S. annual soybean crop in the past and Chinese pork supplies were ravaged by African swine fever last year, a return of tensions on the trade front could cause more volatility in agricultural commodity prices, especially soybeans and hogs.

With prices at or near the lowest levels in years, the downside potential for prices could be limited and the upside potentially explosive. If drought conditions limit the 2020 crop, we could look back at the end of April as a time when grains were at bargain-basement prices.