Crude oil prices rose on Friday in Asia, although they’ll still be ending the week massively lower and will have fallen for eight of the last nine weeks.

Still, given the demand destruction promised by coronavirus, more producers seem to be reining in their output and this is supporting the battered market.

Of course the Organization of Petroleum Exporting Countries and allies including Russia, the so-called ‘OPEC Plus’ group, has already agreed to do so. The 9.7 million barrel/per day reduction agreed by that bloc early this month is set to kick in in May.

However Kuwait’s state news agency reported on Thursday that it will begin to cut without waiting for the official start of the deal, while a major Azerbaijani production project has told Reuters that its output will have to fall sharply.

Gold prices weakened as the US Dollar firmed up in a session which saw stock markets in Asia broadly lower as investors fretted that a coronavirus vaccine may be many months away, perhaps at best.

Still the market remains close to its recent highs and seems unlikely to lose much of its solid haven bid.

The remainder of the session will bring significant economic data in the form of US durable goods orders and the consumer confidence snapshot from the University of Michigan.

US crude oil process have yet to top psychological resistance at $20/barrel or the top of April 21’s sharp daily slide at $21.72. While those two remain too much for the bulls a durable upturn looks unlikely.

If they can be topped however, the market will look further upward to the current downtrend line support at $25.07 and resistance from early April at $29.59 but that band is likely to prove a formidable barrier unless fundamental sentiment improves. 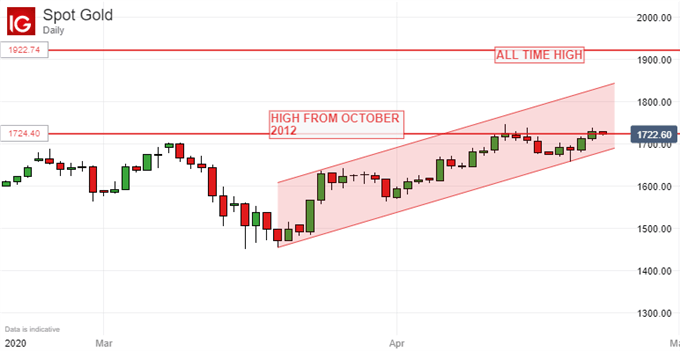 The gold market is at a fascinating point on its daily chart. Investors have been reluctant to push prices beyond the highs from October 2012 revisited once again earlier this month. If they can get above it and hold there into the week’s end, and possibly into the end of April, that might be a notably bullish sign.

However it’s far from assured and the market may well be wary of the sudden liquidation which has been a hallmark of coronavirus-period trading, with investors prone to cash out of the gold market to cover losses elsewhere.

Reversals back below the line will find initial support in the $1600/ounce area which market trade in the last week of March.