Currencies Have A History Of Thanksgiving Milestones

It is a holiday week in the United States but Monday’s moves in forex shows how important it is to not mistake less participation with consolidation. The U.S. dollar fell to fresh lows against the , and as stocks resumed their slide. The forex market will trade continuously but equity and bond markets in the U.S. will be closed on Thursday with half days for both on Friday. Currencies actually have a history of breaking out or reaching new milestones the week of Thanksgiving. Just take a look at the charts below.

Fundamentally, there’s not much on the US calendar this week and it seems like any weakness in second-tier reports is being used as an excuse to continue selling dollars. On Monday, the failed to rebound like economists anticipated and this was enough to send the spiraling lower. With the momentum skewed to the downside, investors completely ignored Fed President and FOMC voter ’ positive outlook – he described the economy as doing very well with solid job growth. Tuesday’s and reports are not expected to alter the dollar’s trend. 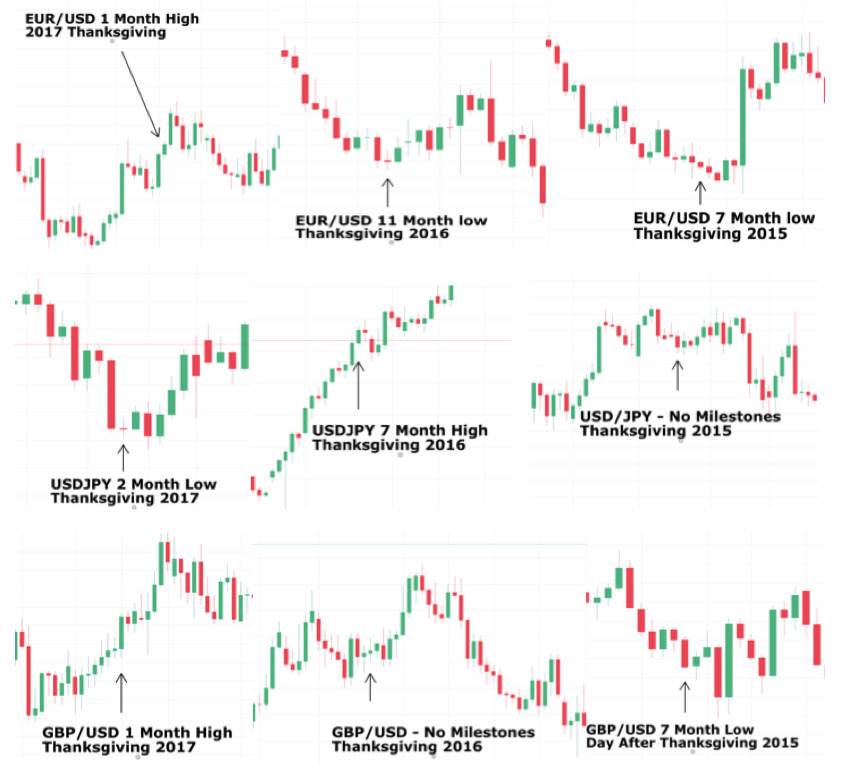 Meanwhile a weaker-than-expected Eurozone failed to stop the from rising. Not only did EUR/USD end Friday above the 20-day SMA for the first time since September but its now also trading above the 200-SMA on the 4-hour, something that it hasn’t done in 2 months. This opens the door for a move to 1.1510, which is where the more serious resistance comes in. Of all the regions in the world, the Eurozone and Canada have the most important economic reports scheduled for release this week and they are all due on Friday. Recent evidence suggests that the Eurozone economy is slowing and there’s a very good chance the PMIs will confirm that. However, the single currency could easily hit 1.1500 before the data is released.

bulls are putting up a fight as the currency traded higher for the second day in a row. The focus is Brexit – Prime Minister May is still working on getting a deal approved by Parliament while Tory MPs are focused on getting enough letters submitted for a no-confidence vote. There will be intensive discussions this week according to May and it’s unlikely that they will amount to anything. Instead, the Tory Party has 25 of the 48 letters it needs to trigger a vote. According to the TIMES, Senior Brexiters have “firm pledges,” from enough MPs to submit letters for a vote this week. If that happens, you can expect GBP/USD to reverse lower on its way to 1.27.

Unlike the European currencies, all 3 of the commodity currencies traded lower against the greenback. and were hit the hardest after a dispute between the US and China prevented the issuance of a final statement at this weekend’s APEC meeting. It is the first time in its 25-year history that the leaders failed to agree on a formal joint statement because according to Canadian PM Trudeau, trade was the central problem. Unfortunately this does not bode well for the upcoming G20 meetings where Xi is scheduled to meet with Trump (he sat down with Pence this weekend). resumed its rise as continue to slide.