Despite New USMCA Deal Recommendation Is To Stay Neutral On Equities

In early August, we recommended staying neutral on equities against bonds despite strong momentum favouring stocks. Indeed, the dark clouds of the trade war between the United States and several countries were still looming over the horizon. Even if we believed that trade conflicts would eventually be resolved, the uncertainty posed considerable downside risks to economic confidence and justified, in our view, a cautious stance. On Sunday evening, the United States and Canada announced a last-minute agreement to replace the 24-year-old North American Free Trade Agreement. The new United States-Mexico-Canada-Agreement (USMCA), although not officially approved yet by its members, dissipates most of the economic uncertainty caused by the trade dispute between the three countries. The announcement was a boon to Canadian companies that were most at risk of a negative shock coming out of potential fallout of the negotiations, such as motor vehicle parts manufacturers (see Chart 1). 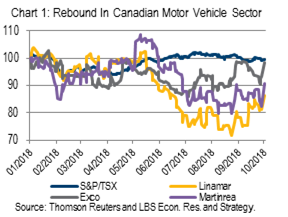 This being said, even if our tactical allocation model continues to strongly suggest overweighting stocks relative to bonds, we believe that trade war threats are still very much alive.

Indeed, geopolitical tensions between the U.S. and China could worsen after tit-for-tat tariffs from both sides were imposed in September. The two countries are now refusing to even engage in discussion to de-escalate the conflict and the possibility of seeing steeper tariffs could start weighing on the global economic outlook. Moreover, the U.S. has genuine trade recriminations (e.g. non respect of property rights, forced technology transfer) against China for which the Republican administration has the American public’s support.

Finally, equities in the United States continue to look expensive. For instance, at 33.5, the Shiller PE ratio is at its highest level since 2001. Moreover, as of the end of September, the was 5.5% higher than its estimated fair value (see Chart 2).

For the month of October we thus remain neutral on equities against bonds, waiting for further fog to clear up before committing to a different position. 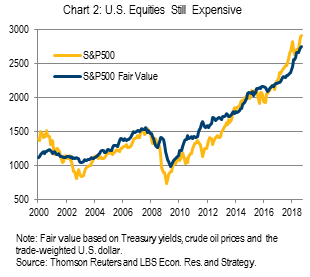 Looking under the hood, steepening oil prices and very positive forward-looking earnings for Canadian energy companies should support the sector, which represents nearly 20% of the S&P/TSX Composite index. In October, we are also slightly increasing our recommended allocation to other developed markets. For one, the ECB remains extremely accommodative, contributing to the easing in credit conditions in the Eurozone (see Chart 3) while “accommodative” is a qualifier that can no longer be applied to the Fed, especially since last Wednesday’s FOMC meeting. 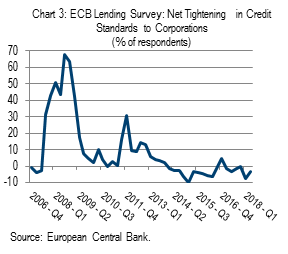 Finally, despite some challenging economic conditions in countries like Turkey and Argentina, we are also maintaining our overweight position in emerging equity markets as these remain cheap relative to developed markets. Leading emerging countries’ economic indicators, like those developed by the OECD, also continue to fare better than their G7 counterparts. Besides, credit growth displays positive momentum in China and stocks exposed to the global economy did well relative to domestic equity in September. As highlighted above, global trade tensions remain high but emerging equity market valuation remains attractive while our emerging-market position is still relatively small at 4% in the portfolio; thus worth the risk, in our opinion.

In Canada, relative to August, our sector allocation has not changed all that much. We are still recommending that clients overweight positions in the Industrials, Financials, Energy, Information Technology andConsumer discretionary sectors while we removed materials from the list after its price momentum collapsed in the last quarter.

In the U.S., the same sectors are recommended and we added the health-care sector on the basis of stronger forward-looking earnings.

Despite positive returns, we continue to keep our neutral stance on corporate bonds this month as valuation still remains historically rich. In fact, as of the beginning of October, BofAML US high yield option-adjusted spreads were at the lowest level since July 2007, near 3.25%. As a growing number of central banks continue their tightening cycle, higher interest rates will eventually bite credit quality, especially in the high yield segment. With historically high corporate leverage, we are of the opinion that it is better to avoid the downside exposure that would cause widening credit spreads in return for only limited and temporary rewards.